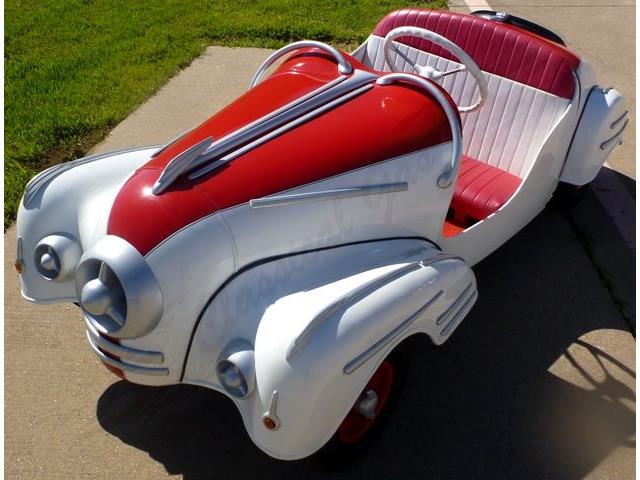 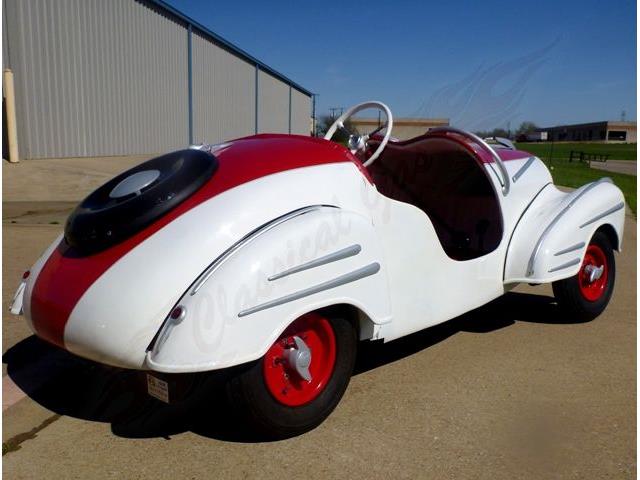 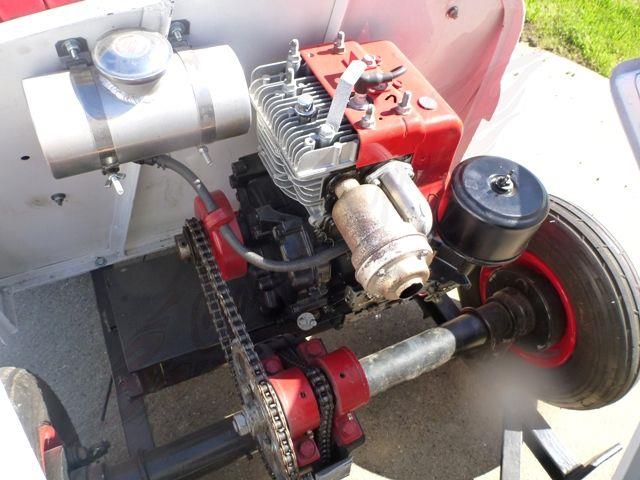 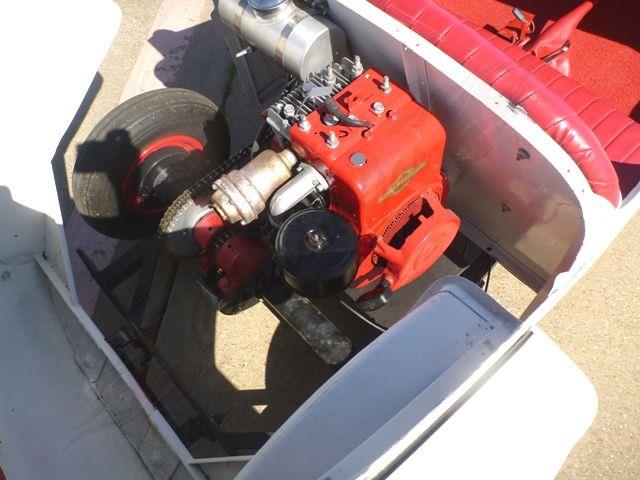 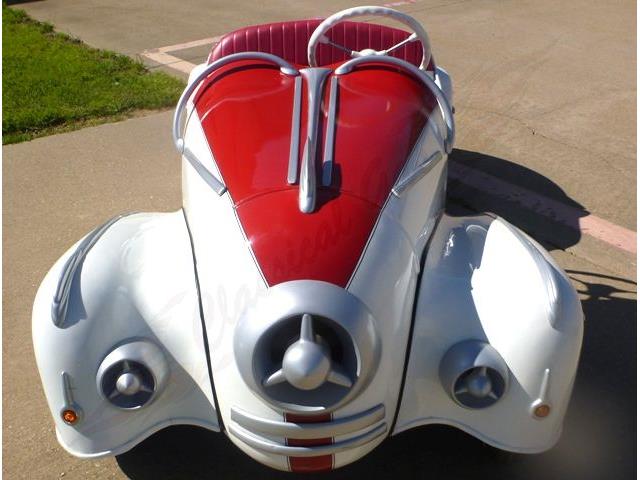 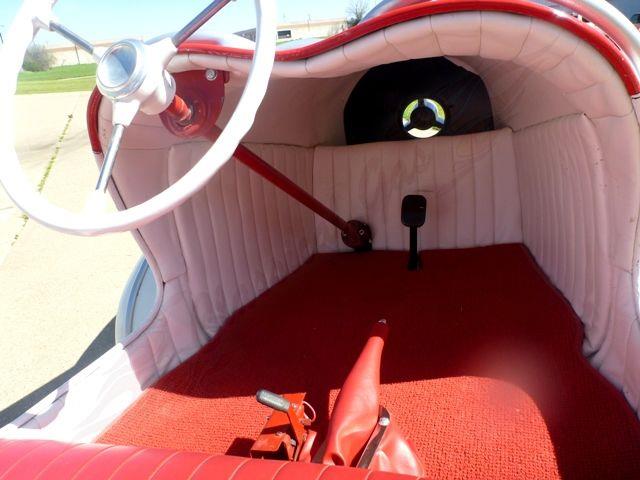 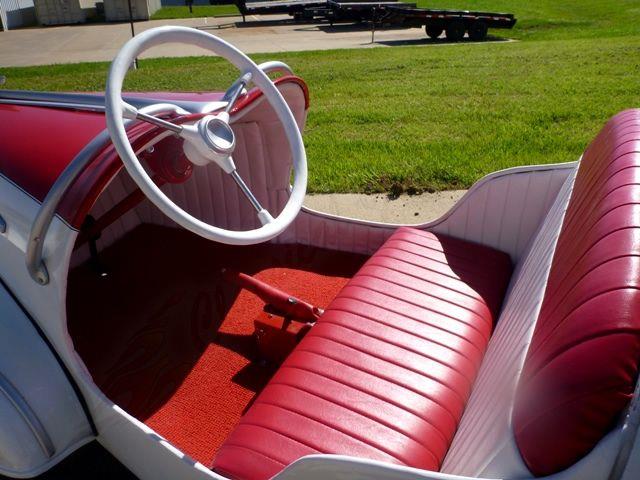 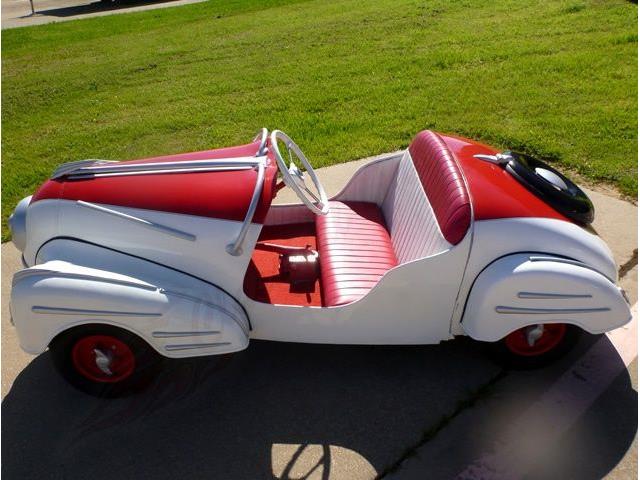 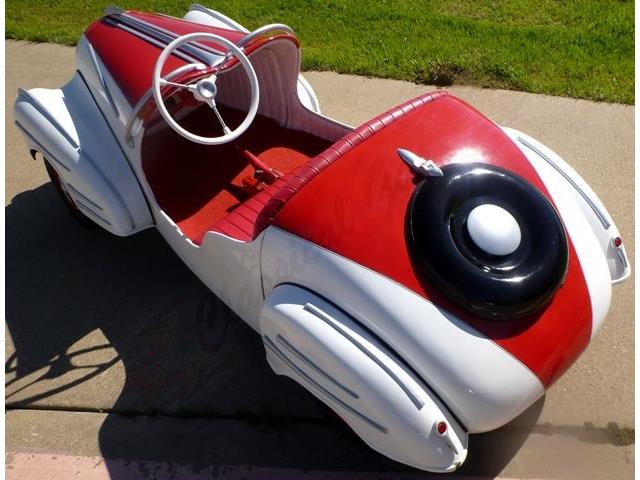 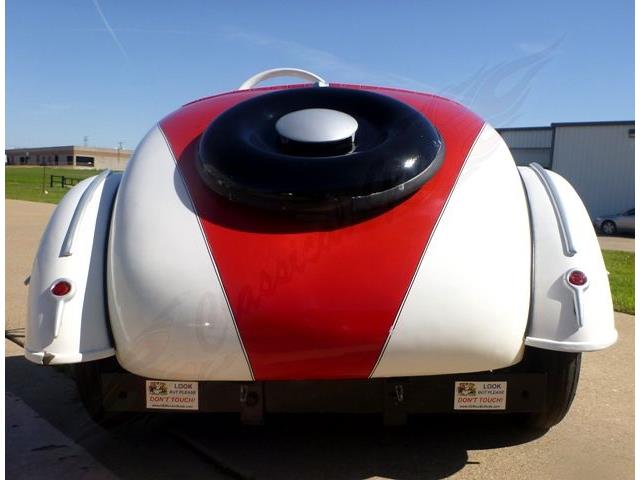 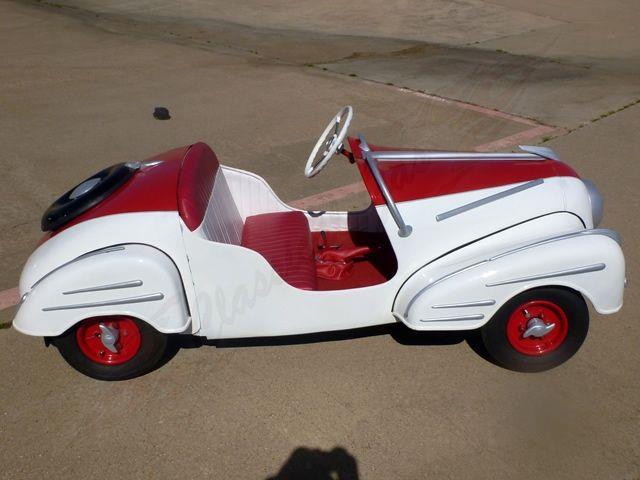 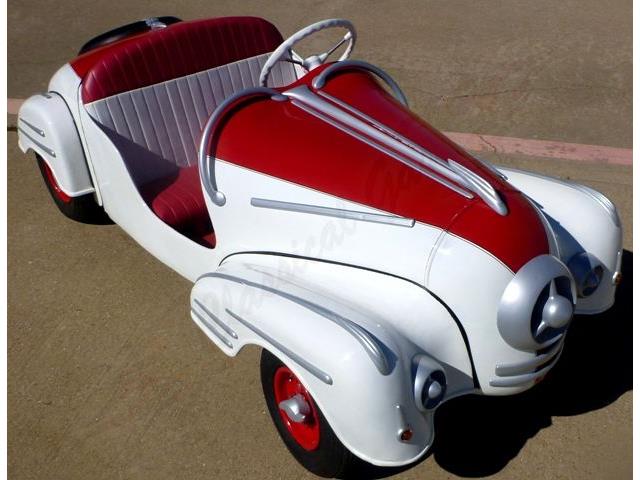 If you have never heard of the IHLE line of Microcars, no worries. These rare little Microcars were created for use in amusement parks and according to the original owner this one was actually used at Six Flags Over Texas. These cars are rarely ever seen and even less are being offered up for sale. In fact, this is the first that we and most of our friends in the hobby have ever checked out in person. A few have been sold through auction in the past and one just like this was once featured in The Bruce Weiner Microcar Museum. Those cars sold for $36,000 and $42,000. This car recently underwent a restoration with a repaint of the body in Red and White. All of the accent trim pieces including the front handle bars were painted in Silver. A new Briggs and Stratton motor was installed in the rear and starts up well via the pull cord. Some of these were originally push start cars where the ride attendant would be required to get you going so the lawn mower motor is actually much more convenient. The rear spare cover gives some access to the motor but to really check it out you open the entire tail piece which tilts backwards. The interior is kept simple with a recovered Bench seat, emergency brake, brake pedal, steering wheel, and an accelerator lever. This is certainly not just a conversation piece to display in your shop because the car runs and drives well. It is surprising how fast it zips around the parking lot. It would be an extremely fun way to navigate that next car show or swap meet!

It has been pretty fun researching this car so below us one of the articles we have found, it was not written by us.

"Gebr Ihle" translates from German as "brothers Ihle." Siblings Thomas and Frank Ihle, of Bruchsal in the district of Karlsruhe, near the French border, manufactured racing cars, including a competition version of the BMW Dixi, which was a license-built version of the British Austin Seven. They are said to have created the signature "double kidney" design for the BMW grille. After World War II, they commenced to build small cars for amusement park rides, of which your Schottenring is an example. Located near the town of Schottenring in central Germany, the Schottenring is one of the oldest motorsport tracks in that country, established in 1925. Racing was discontinued after 1956, but it still serves as a facility for rallies and classic motorcycle events.

Schottenring cars were available with two different types of front-end sheet metal, in order to give the impression of greater variety in their amusement park setting. Several different engines were used, typically a 125-cc single-cylinder, two-stoke Hirth unit of 7 hp. There was neither transmission nor suspension axles were hard-mounted to the vehicle frame. Steering was by rack and pinion, and cable-operated brakes were furnished for the rear wheels only. The tires were 4.008 pneumatics of the type commonly found on wheelbarrows.

Although as sturdily built as many of the roadgoing microcars, Ihle Schottenring cars were not equipped for legal highway use, to the point of lacking an electric starter. Apparently, park attendants push-started them for their customers. As for rarity and value, I haven't been able to find out how many were built, nor am I sure what yours would be worth. A fully restored example sold for $41,400 at the auction of the Bruce Weiner Microcar Museum in Georgia in February 2013.

This is a really fun special interest classic that puts a smile on the face of anyone that has seen it. Some call it a Microcar, some bumper car, and others a clown car. No matter what you call it, the car always gets attention and is a hit wherever it goes. Many of these cars were lost so the number that still exist is really unknown. Preserve a piece of history and add this classic to your collection!