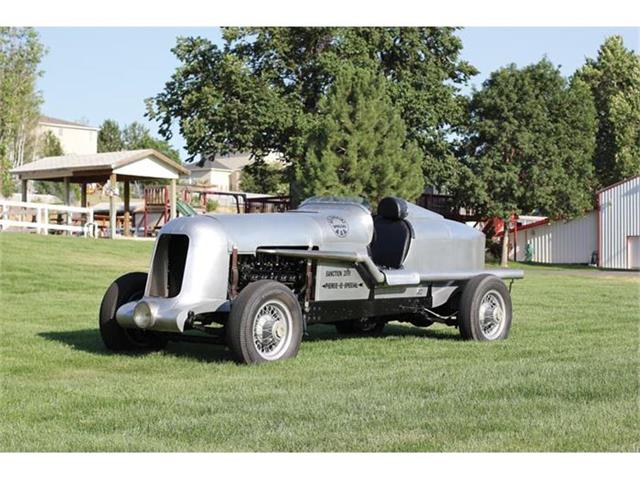 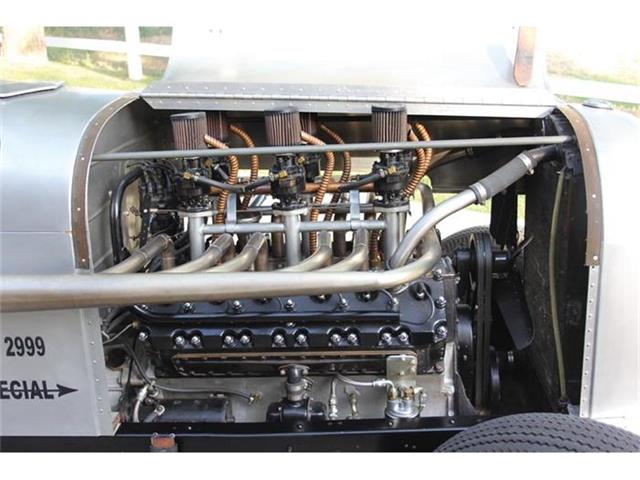 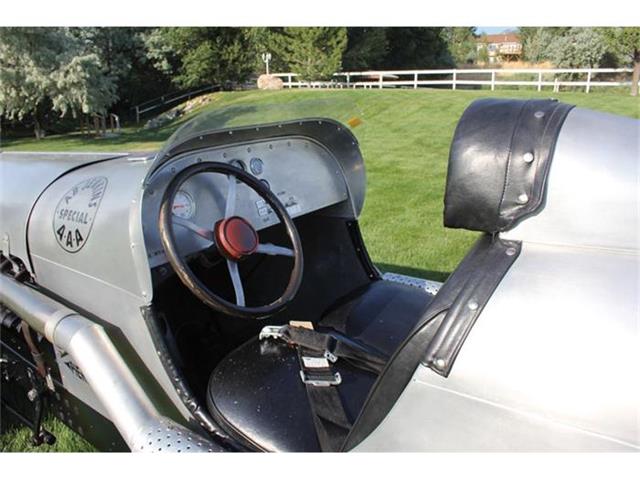 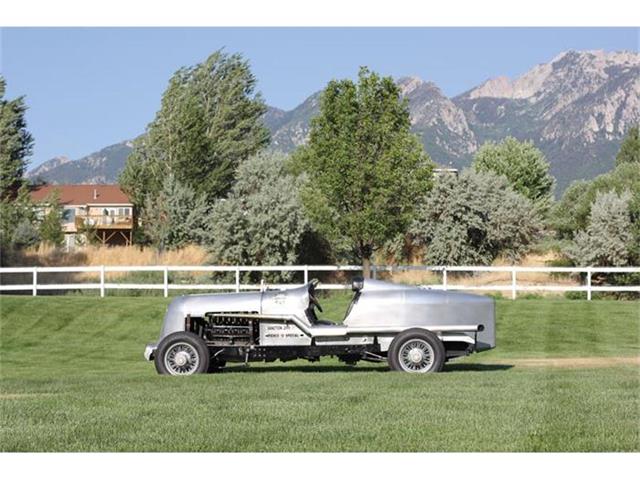 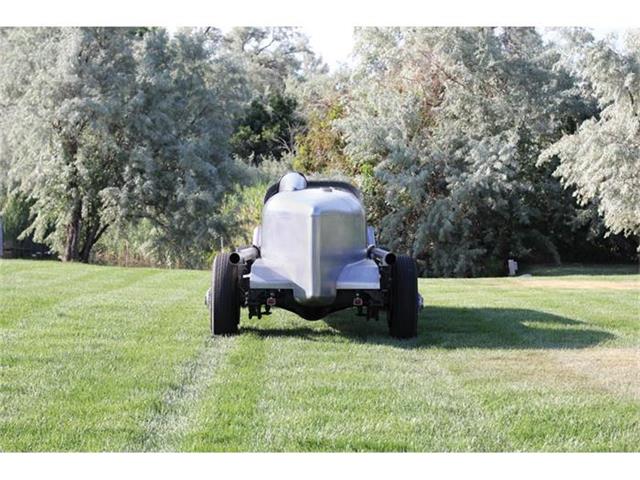 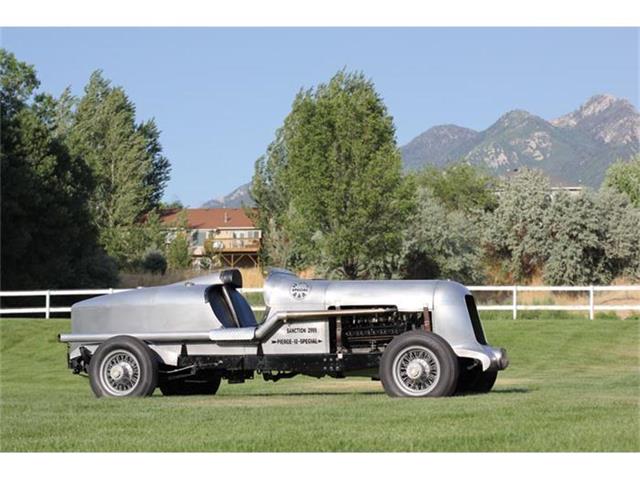 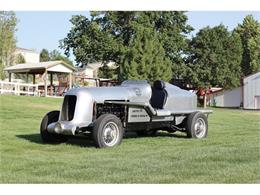 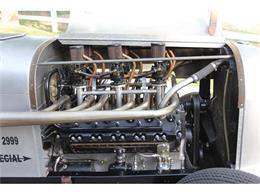 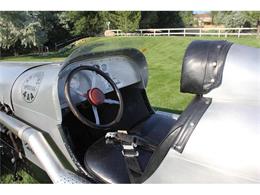 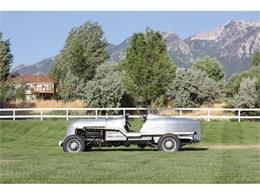 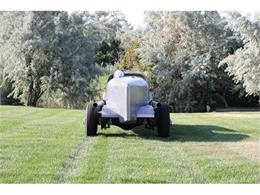 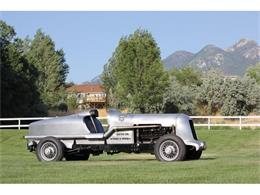 Raced on the Bonneville Salt Flats, Built Under the Supervision of Marvin Jenkins, Chief Mechanic of the Original "Ab Jenkins Special"

Utah's 100 square-mile Bonneville Salt Flats are an expansive wasteland that claimed the sanity and lives of many settlers during the 1800s. Creeping across the sparse, blinding whiteness of the flats at three miles per hour was a brutal, three-day ordeal for these early settlers, but the territory that was the bane of early settlers was a boon for speedsters of the early 20th century.

Because it was a hotbed of bicycle and motorcycle racing, Salt Lake City was known as "The Birthplace of Speed" at the turn of the century. It was here that a young Mormon carpenter named David Abbot Jenkins was introduced to motorcycle racing. Known as "Ab," he competed in 1/2-mile races on dirt tracks, as well as in cross-country motorcycle races.

A highway was constructed through the Salt Flats in 1925. A friend who had worked on designing the road asked Jenkins if he would be willing to race an automobile down the new highway against the train as a part of the highway's inaugural celebration. Jenkins accepted the challenge, and beat the train by five minutes. Jenkins was convinced that the area had enormous potential for racing. He set about championing Bonneville as the next great land speed track.

Jenkins was far from the stereotype of a reckless, speed-crazed thrill-seeker. A devout Mormon, he never considered himself to be a rough and tumble daredevil. In fact, he was very much a mannerly gentleman-sportsman who never touched caffeine or alcohol and consciously avoided all things crude and vulgar. Jenkins saw his races mainly as a test of his strength and fortitude, which he attributed to his dedication to restrained, modest Mormon living. "I owe the maintenance of my endurance ability to the observance of the Word of Wisdom of the Mormon Church," said Jenkins, "which my good mother taught me as a boy.”

His racing got the attention of the Pierce-Arrow automobile company, who invited him to come to their factory in Buffalo. Pierce-Arrow had developed a 12-cylinder engine, but couldn't get it to out-perform their eight-cylinder. Jenkins was asked to see what he could do to improve its performance. After a few weeks of tinkering, he raised the output of the engine significantly, and got the idea that running the powerful new 12-cylinder on the Salt Flats for a 24-hour endurance run would be a perfect opportunity to show what both Bonneville and the engine were capable of. He told Pierce-Arrow officials that he would run the car 2,400 miles in the 24 hours. They laughed at him. Undaunted, he set off to test the 12-cylinder Pierce-Arrow in Utah with the car and six new tires as his only equipment. Pulling the fenders and windshield off the Pierce-Arrow, Jenkins simply smeared his face with grease to protect his skin from the sun, put on a pair of goggles, hopped into the car and raced onto the 10-mile oval track. As he raced, the timers signaled his speed to him with large signs. For amusement, Jenkins wrote notes back to his crew on a notepad anchored in the middle of his steering wheel and then threw the missives to them as he thundered by at over 100 mph. He stopped to refuel every two hours, but he never left the driver's seat of the car for 24 hours straight. When he finally got out of the car at the end of the run, he was stone deaf from the roar of the engine. Rather than running the 2,400 miles he had promised the Pierce-Arrow people, Jenkins had run 2,710! His average speed for the 24-hour period was 112.916 mph, which was close to a new world record.

In 1934, Jenkins arranged for his second endurance run on the Salt, the first one that would officially go for the record. With a somewhat expanded base camp, Jenkins set out on another endurance race with the same Pierce-Arrow, although this time, equipped with a streamlined boat-tail body and the moniker “The Ab Jenkins Special.” Shortly after the race started, a violent storm erupted with winds gusting up to 60 mph, but the torrents of wind and rain did little to slow his speed. After the last gas stop of the run, Jenkins took out a safety razor and shaved while circling the track at over 125 mph with no windshield. When the race ended, he hopped out of the original “Ab Jenkins Special,” clean-shaven and presentable, and the owner of a new World Land Speed Record of 127.229 mph. Ab and his son, Marvin Jenkins, would go on to earn hundreds of Land Speed Records, including those with the Duesenberg Mormon Meteor (which sold in Monterey for $4.45 million and won Best of Show at Pebble Beach in 2007) and eventually, the Curtiss aircraft engine-powered Mormon Meteor III, which held its records for decades.

The beautiful 1932 Pierce-Arrow presented is a faithful recreation of the vehicle raced by Ab Jenkins in 1934, constructed in conjunction with Ab’s son, Marvin, who was the chief mechanic on all his father’s record setting drives. He actually helped Ab build the original car in the Pierce-Arrow factory in Cleveland. A 1932 Pierce-Arrow chassis was located in California, a Pierce 12-cylinder engine was sourced from Tucson, Arizona, and was painstakingly rebuilt with six carburetors, special manifolds, and high compression heads – all of the same modifications done by Marvin in 1934, utilizing the actual notes penned by Ab Jenkins. This raised the horsepower from the factory 175 to 235, and is the same powerplant that powered Ab Jenkins to the World Record in 1934.

A wooden buck was built to replicate the method used to build the original streamlined body, and Jamie Hart, an instructor at McPherson College in McPherson, Kansas, created the hand-formed body utilizing traditional English wheel techniques. Period wheels were sourced from an old race car in Lincoln, Nebraska, and in 2004, this car ran on the Salt, with Marvin Jenkins present, achieving over 117 mph, as certified by the Utah Timing Association. The Worldwide representative who drove the car in 2004 reports the car starts easily, has incredible torque, and was remarkably smooth at speed. It has resided ever since in a large and notable Salt Lake City area collection, where it has been expertly maintained and used sparingly.

Here you have a remarkable opportunity to own an accurately built version of Ab Jenkin’s first record setting car with construction supervised by Marvin Jenkins himself. The Ab Jenkins Special is often credited with legitimizing Land Speed Racing in 1934 at Bonneville, and this remarkable vehicle represents an incredible, functional link to the glory days of the American dominance of the sport.

Sold on a Bill of Sale Only.