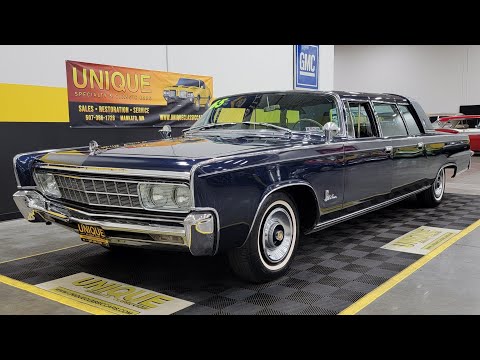 1965 Imperial LeBaron Barreiros Limousine finished in Blue paint with blue quarter vinyl top. Vinyl top is in nice shape. This car is not an Italian Ghia, it is actually the more rare manufacturer Barreiros out of Spain. In 1965 all the tooling was sold to a Spanish company, Barreiros who took the tooling and built 10 limousines in 1966; we believe this to be one of those 10! 1965 cars were column shift, where 1964 and earlier models were push button. So when Ghia was building their "1965" models, they were actually 1964 model year Imperials with 1965 grilles. This has a 1966 grille, while being a 1965 model year.

Another thing that sets them apart is the wheelbase. In the Ghia cars, they rode on a 149" wheelbase; whereas the Barreiros cars were 154" wheel base. Rear facing jump seats are equipped on this as well, a Barreiros design compared to Ghia having forward facing rear jump seats. Chrysler themselves (or Imperial rather) had these cars start as sedan bodies on convertible frames.

We believe the front driver upholstery appears original, black vinyl bench seat with automatic on the column. Power antenna and radio are working. The dash does have some cracking. Front and rear air conditioning fan is also equipped. Blue cloth bench seat interior in the rear passenger area with power glass divider still working correctly also. Rear radio that is mounted in the trunk has controls in the rear armrest, with the rear a/c and heater controls under the left armrest! Powered by the 413 V8 that is paired with an automatic transmission. Stock sounding Imperial!

Please see video for full breakdown of this vehicle

Give us a call at 507-386-1726 or email "[email protected]" to inquire about this vehicle.
TRADES WILL BE CONSIDERED AND FINANCING IS AVAILABLE

This particular vehicle IS ELIGIBLE for an extended warranty! Ask us for more details!

•••MN residents are responsible for tax, license and title procurement fees. Out of state buyers will only have a $125 Title Procurement fee, no tax or other fees charged.•••