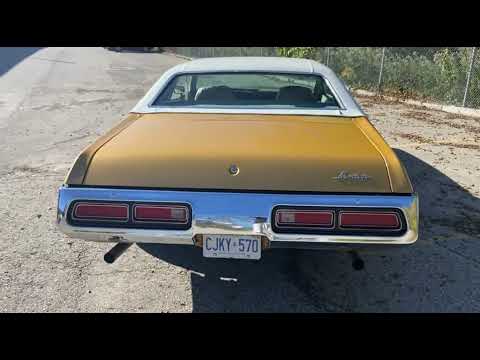 Here is a true survivor with low original kilometers. A little tlc is needed on the body to bring this beauty to perfection. 1973 Mercury Montego Mx. This is the last year for the Cobra Jet Cars. 351 Cleveland Cobra Jet, Montego MX “Q” code car. 90,000 original miles, 2 door coupe, the car has had some updated accessories added. This includes hooker headers with dual stainless exhaust, holley 750 The factory items included are original exhaust manifolds and carburetor. Factory rim blow steering wheel, bucket seats and console. Brakes have been done all around. Two sets of newer tires and the factory set of 14” with caps. Presently running a set of 15” center lines on bfg tires. factory am/fm 8 Track with Cassette adapter for 8 Track. 3.25 9” Rear End, factory instrumentation and tach, needs some body but a very solid car. It has the factory air conditioning the belt is not hooked up .Available to a serious buyer the Marti Report as shown one of very few cars ever built in Cobra Jet model. Very quick car and a pleasure to drive. The car has been well maintained over the years and it shows. These cars are only going up value especially a well optioned car as this one.

The vehicle is listed on consignment from a client in Plattsville ,Ontario.To make an appointment for viewing please contact us at [email protected] We can also arrange a zoom meeting or other online communication. The vehicle is available for international shipping. Please check us out fulltiltclassics.com

Here is some interesting history on the Mercury Montego.

Second generation (1972–1976) 1972–1976 1974 Mercury Montego MX Brougham Overview Production 1972–1976 Body and chassis Class Intermediate Body style 4-door sedan 4-door station wagon 2-door hardtop coupe 2-door fastback coupe Layout FR layout Related Ford Torino Ford Elite Mercury Cougar Powertrain Engine 250 cu in (4.1 L) I6 302 cu in (4.9 L) V8 351 cu in (5.8 L) V8 390 cu in (6.4 L) V8 400 cu in (6.6 L) V8 460 cu in (7.5 L) V8[1][2] Transmission 3-speed automatic 3-speed manual Dimensions Wheelbase 118.0 in (2,997 mm) (sedan, wagon) 114.0 in (2,896 mm) (coupe, convert.)[2] Length 223.1 in (5,667 mm) (sedan, wagon) 215.5 in (5,474 mm) (coupe, convert.) Chronology Predecessor Mercury Comet Mercury Cyclone Successor Mercury Cougar For 1972, the second-generation Montego was introduced alongside the redesigned Ford Torino.[3] In a major design shift, the intermediate Ford/Mercury model lines shifted from unibody to body-on-frame construction; similarly to the General Motors A-platform, the Montego adopted a split-wheelbase chassis (114-inch for two-doors, 118-inch for four-doors and station wagons). True four-door hardtops were replaced by "pillared hardtops" (frameless door glass remained, supported by a thin B-pillar), while two-door Montego’s retained hardtop roofs, though with much wider C-pillars. The Cyclone had reverted from a stand-alone model line to an option package for 1972 for the Montego; only 30 1972 Cyclones would be produced, making it among the rarest Mercury vehicles. As a replacement for the Cyclone, Mercury introduced the Montego GT, a counterpart of the Ford Gran Torino Sports Roof for the first time; the Montego GT was offered from 1972 to 1973. As a standard engine, the Montego was equipped with a 250 cubic-inch inline-six, with five different V8 engines available as options. Starting in 1974, the Mercury Montego was available with a 460 V8, shared with the Mercury Marquis/Colony Park. The redesign was initially met with success, as 1972 Montego sales increased 136% over 1971;[4] the MX Brougham saw the largest increases in sales, as the two-door increased its sales by 897% while the four-door increased by 1,021%.[4] Following the 1973 gas crisis, sales were depressed by industry-wide fuel economy concerns. The redesigned 1974 Mercury Cougar shifted from the Ford Mustang chassis and upsized to Montego two door bodies which were also shared with the mid-year addition of the Ford Elite. The new Cougar which was more competitive in the growing intermediate personal luxury car segment produced model overlap causing slower sales of the Montego along with the success of the Mercury Monarch, as buyers shifted from intermediates and full-size cars towards fuel-efficient compact sedans. For 1975, the six-cylinder and 302 V8 engines were dropped from the lineup, leaving the 351 V8 as the standard engine. For 1977, in a mid-cycle redesign of the Ford intermediate lines, several nameplates were shifted. Mercury rebranded the Montego as the Cougar, in favor of offering a full range of body styles for the Cougar line alongside the flagship XR7 personal luxury coupe; Ford rebranded the Torino/Gran Torino as a facelifted LTD II, with the Elite rebranded as a downsized 1977 Thunderbird. 1972-73 Mercury Montego GT 1974 Montego MX Villager station wagon 1974 Montego MX Brougham interior 1975 Mercury Montego 2-Door Hardtop