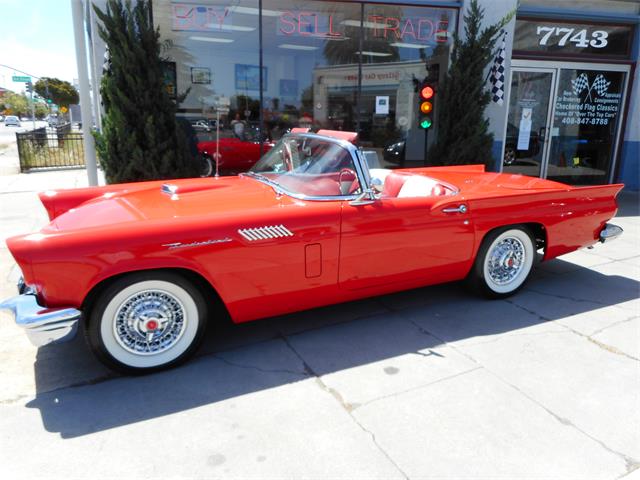 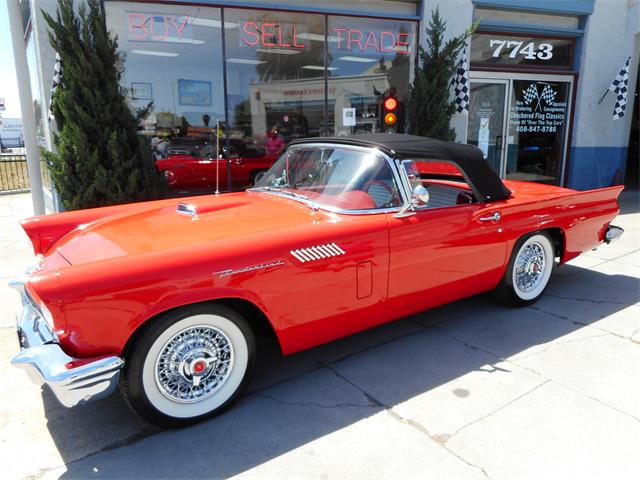 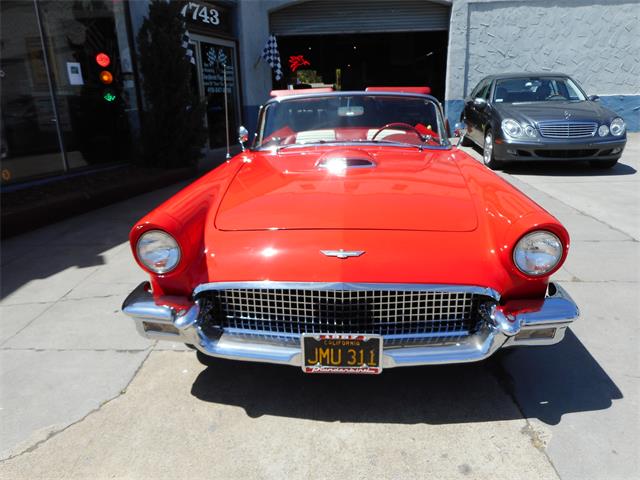 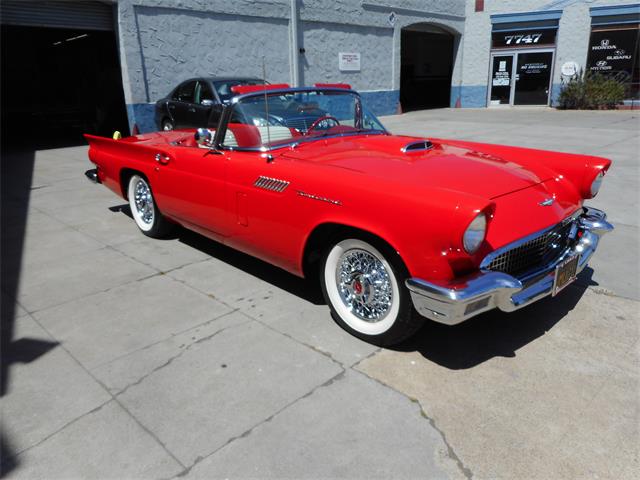 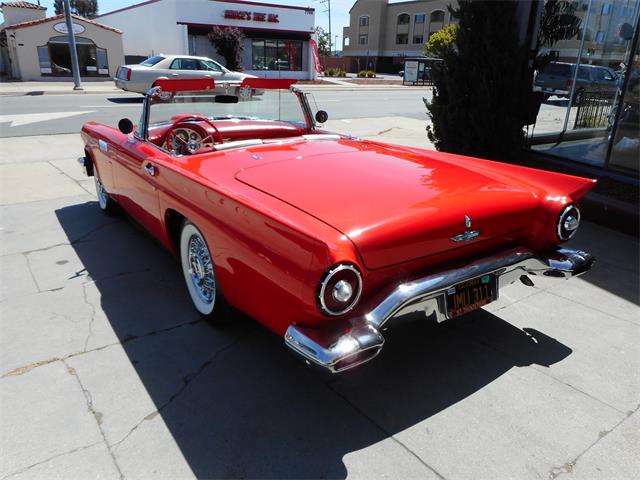 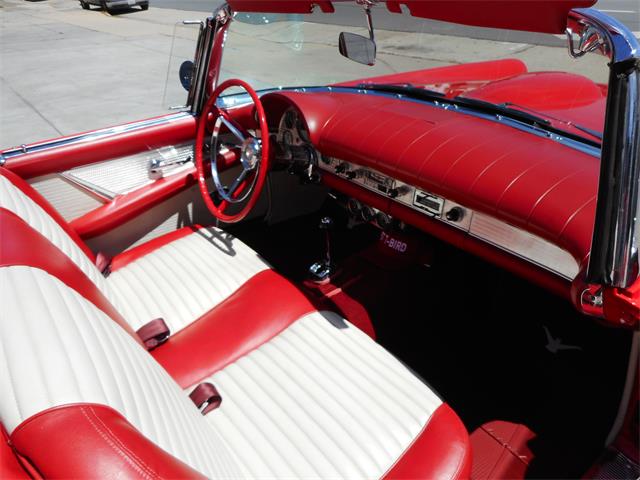 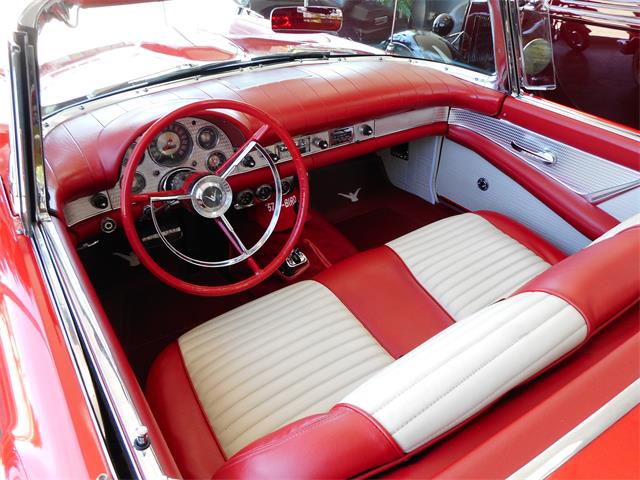 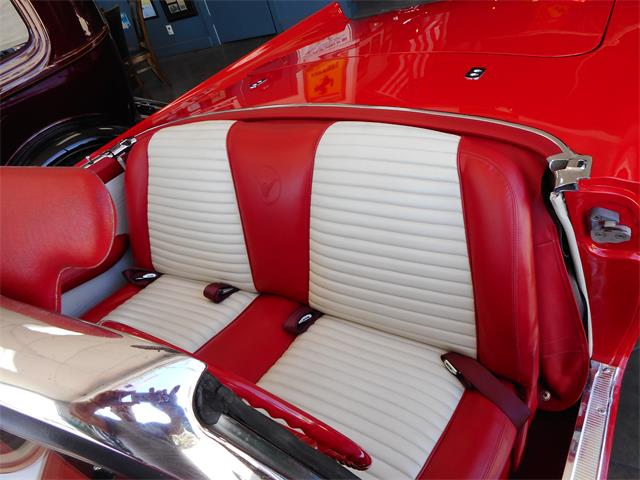 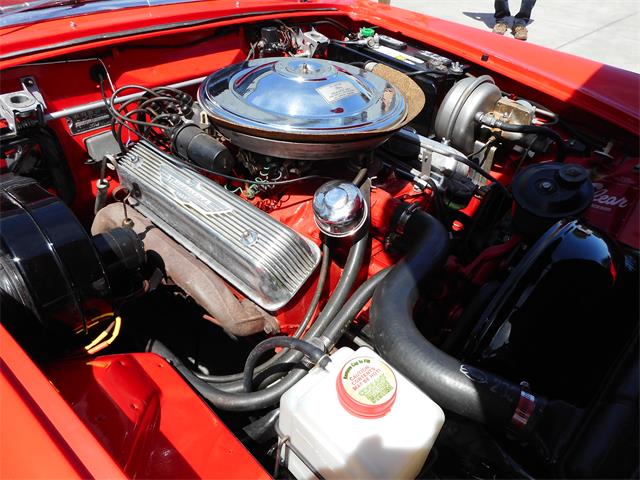 This is a stunning example of a fully restored 1957 Thunderbird collector owned for a number of years and equipped with both tops, new soft top, power steering, power brakes, power windows, power seats, Kesley real wire wheels, new interior, original rebuilt motor and transmission and much more.  This little American Icon comes with a binder full of restoration receipts, NO RUST.   It is the BEST running T-Bird we have had in 16 years, drives super GREAT, powerful, easy to drive, dependable and a true investment.  #32106    Now on display at the home of “over the top cars” CHECKERED FLAG CLASSICS 7743 MONTEREY ST GILROY, 408-847-8788 or 888-625-2774, sold as-is, California buyers are responsible for sales tax and license fees.  On the web: checkeredflagclassics.com   Buy with confidence I am a licensed bonded California dealer for over 16 years.

The Ford Thunderbird was introduced in February 1953 as a response to Chevrolet’s new sports car, the Corvette, which was publicly unveiled in prototype form just a month before.  Under rapid development, the Thunderbird went from idea to prototype in about a year, being unveiled to the public at the Detroit Auto Show on February 20, 1954. It was a two-seat design available with a detachable glass-fiber hardtop and a folding fabric top.  Production of the Thunderbird began on September 9 of that year, with the car beginning sales as a 1955 model on October 22, 1954. Though sharing some design characteristics with other Fords of the time, such as single, circular headlamps and tail lamps and modest tailfins.  Though inspired by, and positioned directly against, the Corvette, Ford billed the Thunderbird as a personal car putting a greater emphasis on the car's comfort and convenience features rather than its inherent sportiness.  The Thunderbird was revised for 1957 with a reshaped front bumper, a larger grille and tailfins, and larger tail lamps.  The instrument panel was heavily re-styled with round gauges in a single pod, and the rear of the car was lengthened, allowing the spare tire to be positioned back in the trunk.  The 312 cu in (5.1 L) V8 became the Thunderbird's standard engine, and was now rated at 245 hp. Ford was pleased to see sales of the Thunderbird rise to a record-breaking 21,380 units for 1957