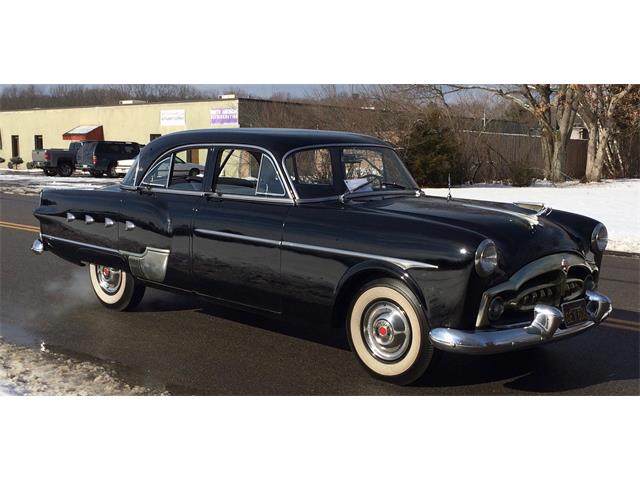 On a presumably sunny Sunday morning in Yorba Linda, California, Meyer E. Ponteprino left church and walked towards his 1952 Packard Patrician ‘400.’ He had bought the top-of-the-line car brand-new in December 1951, not long before, from Les Thompson’s Packard dealership in Fullerton. The gleaming black sedan with its distinctive ‘400’ rear fender trim was one of the perks of hand-won family success. The Ponteprinos had over several generations built enormous avocado groves that had gradually given way, profitably, to suburban sprawl, including the 91 freeway. Mr. Ponteprino appreciated fine automobiles, having earlier bought a 1942 Packard convertible that the ’52 joined in the family garage.

That Sunday, however, Mr. Ponteprino was horrified to find his otherwise pristine Patrician missing its antenna; a ne’er-do-well had snapped it off during the church service. As his sister recounted later in life, he was horrified that someone would do such a thing to a man attending church – and so he drove the Packard home, to the farmhouse amongst the avocado trees. There it went into the garage, up on blocks, and there it remained. Not forgotten, it did receive a new antenna and was reportedly started and cleaned regularly, and was registered at least through 1963. However, as the world changed around it, the Packard never left the safety of the garage again. Every after its original owner passed away in 1997, the Ponteprino family continued to keep the car.

In 2016, enthusiast Randy Carlson discovered the Packard and finally retrieved it, finding a car that required a good dusting and a thorough service but was, otherwise, a remarkably pristine top-of-the-line 1952 Packard. Sold a year later to the current collection, it remains today an unrepeatable artifact, with only 1,317 actual miles!

The paint is still intact and holds a deep shine, with only the most minor of storage wear, and the chrome has polished up well, showing only minor pitting that can be instantly forgiven – it is original factory chrome, after all. Similarly, the engine compartment shows the expected surface patina not unwelcome in a Preservation Class car. The interior is, simply, remarkable and virtually new in all respects, down to the steering wheel.

Amazingly, the Packard is even still on its original set of General Whiteway tires, with their distinctive ribbed stripped whitewall pattern. Having been up on blocks, the Packard never

stressed the tires, and they remain in excellent condition and hold air; the spare in the trunk is nearly pristine, as is, for that matter, the lining of the trunk itself. The jack is still present, and is, in fact, still in its original packaging. The other contents of Mr. Ponteprino’s trunk are also included – including a Keane’s Fancy Whisk Broom, Teco Travelite map light, and Git Um Dust Cloth, themselves mementos of a bygone motoring age. Naturally, the car’s California black plates, issued in 1963, are still installed.

Indeed, with this Packard comes all the accoutrements of ownership – a fabulous collection of documentation, including three original brochures, “Your Guide for Operating and Caring for Your Packard,” a brochure seeking “To Acquaint You with Your Packard,” and an Earle C. Anthony letter and ownership survey sent to Mr. Ponteprino upon his acquisition, still in their envelopes. The Pre-Paid Lubrication Service booklet, made out to Mr. Ponteprino, is missing only its first ticket – presumably the only service the car required before that fateful day in the church parking lot. Even the Packard Custom Radio instructions remain with the car, as does an advertisement for the General tires. Copies of photos of the original owner and his home are tucked into the file, along with a photocopy of the original 1951 California registration and an original 1962 registration slip.

Further, videos are included, depicting the untouched Packard’s retrieval from the Ponteprino garage, as well as the first-person account of its story by Mr. Ponteprino’s sister. In the care of the current collection manager, the car has received basic proper maintenance, including routine starting and driving exercises, to continue to preserve its condition.

In presentation and in provenance, there is no better 1952 Packard Patrician ‘400’ extant. It is every bit the automobile that Meyer Ponteprino drove with pride, a pride soon to be felt by the next person to carry on his tradition.

Please note this Packard is titled by its engine number.