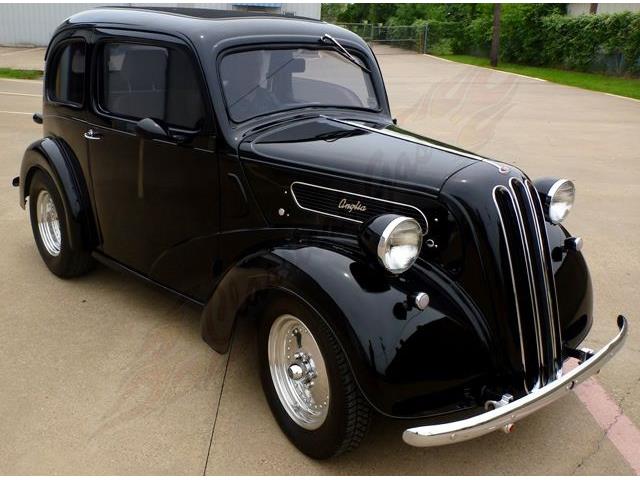 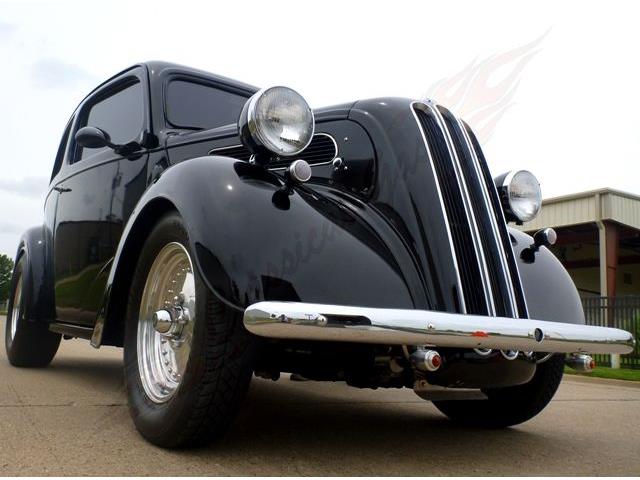 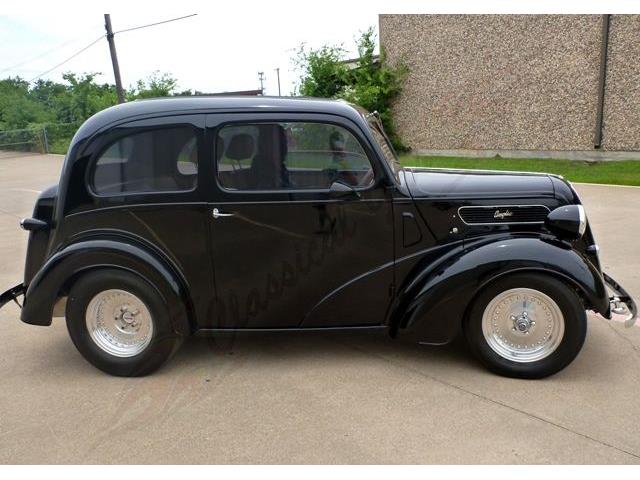 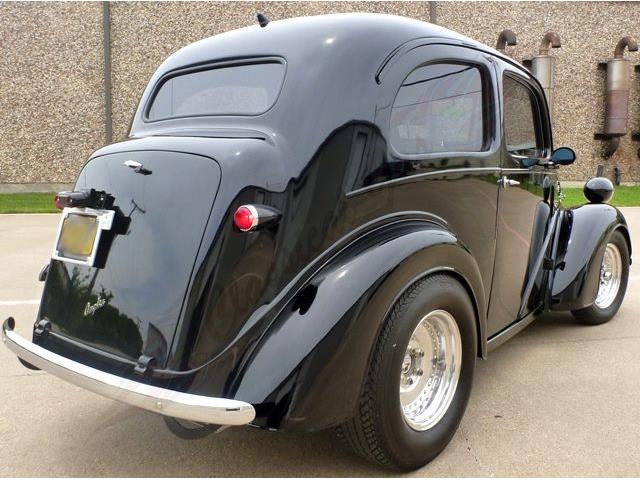 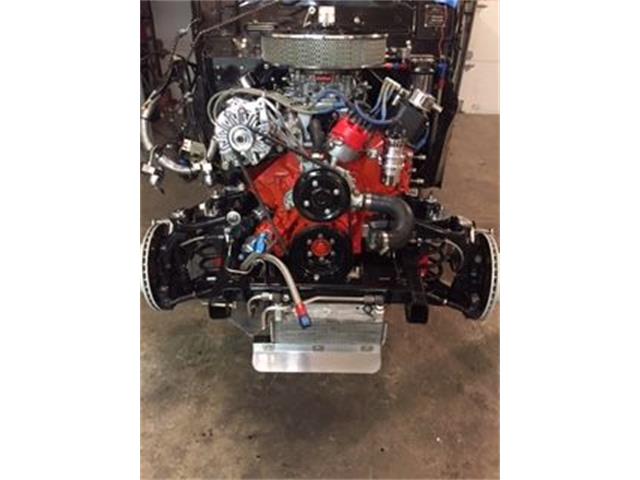 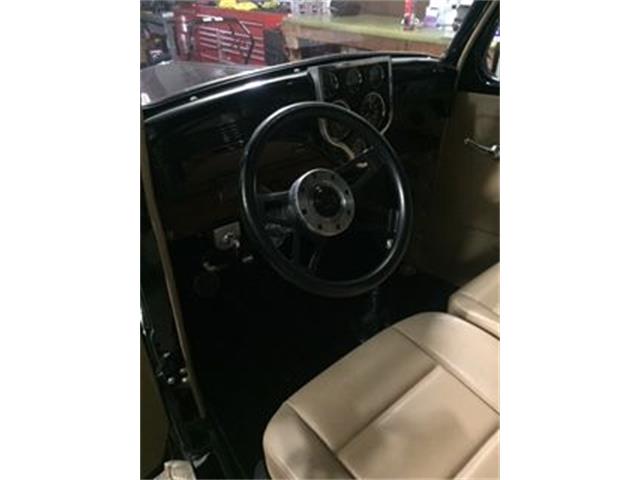 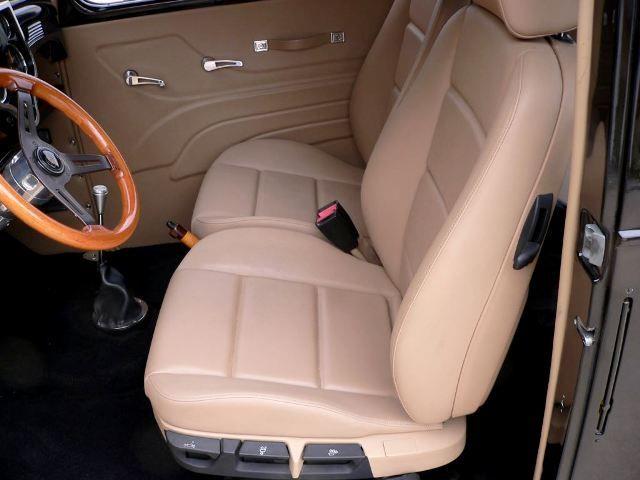 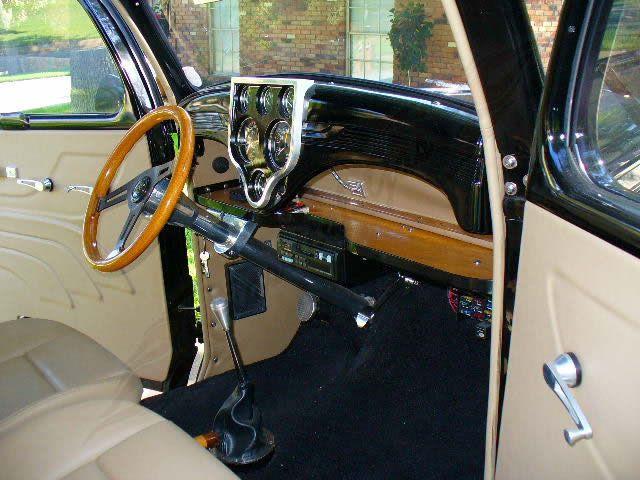 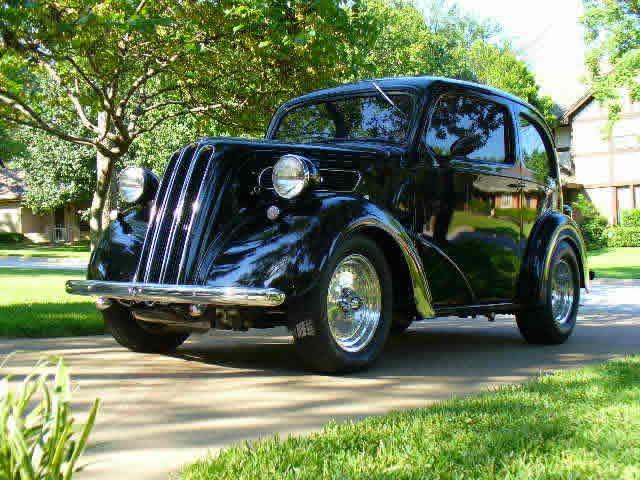 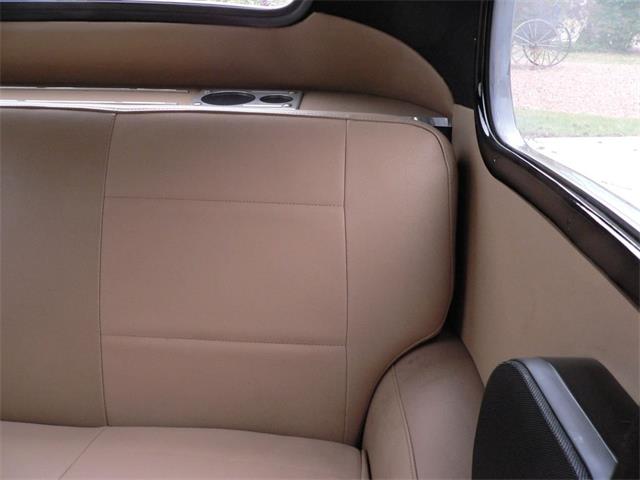 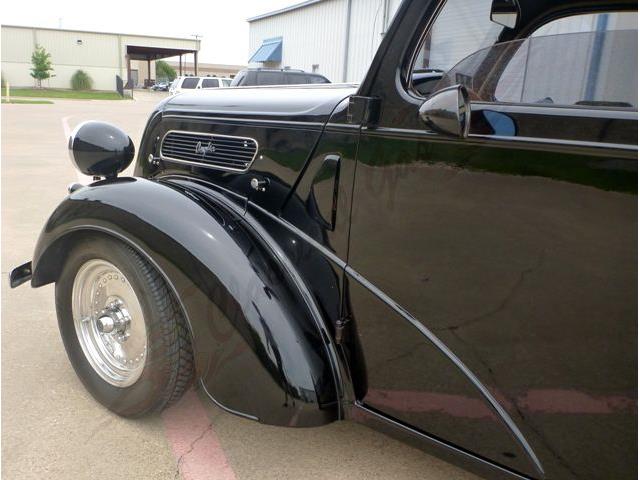 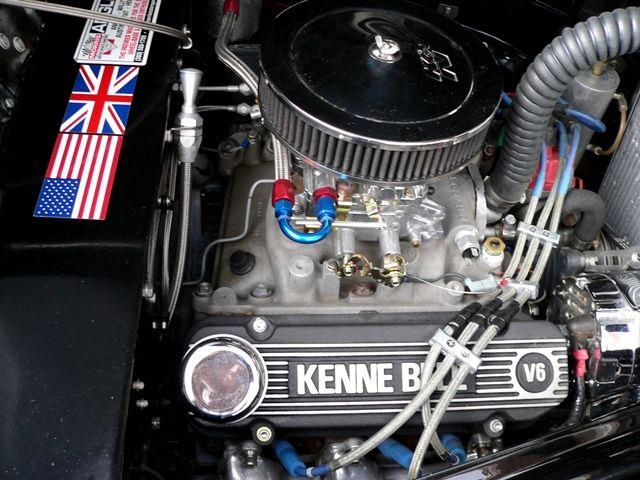 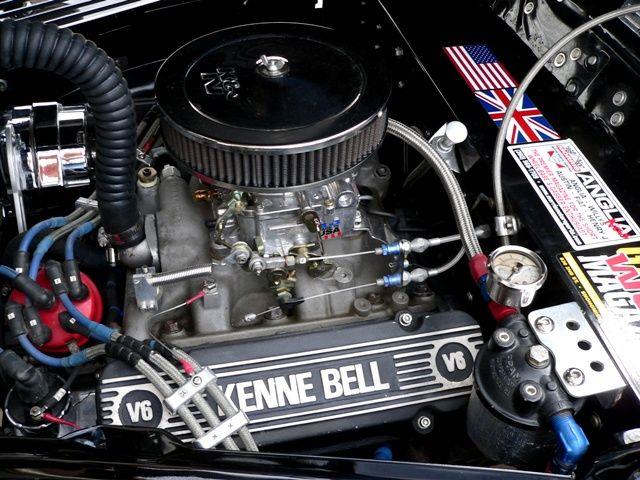 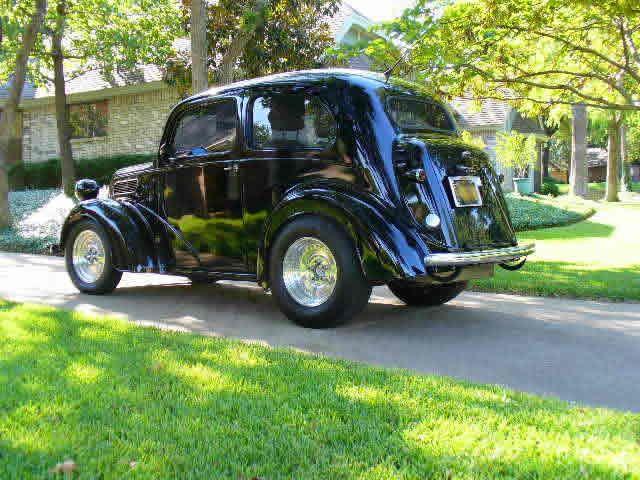 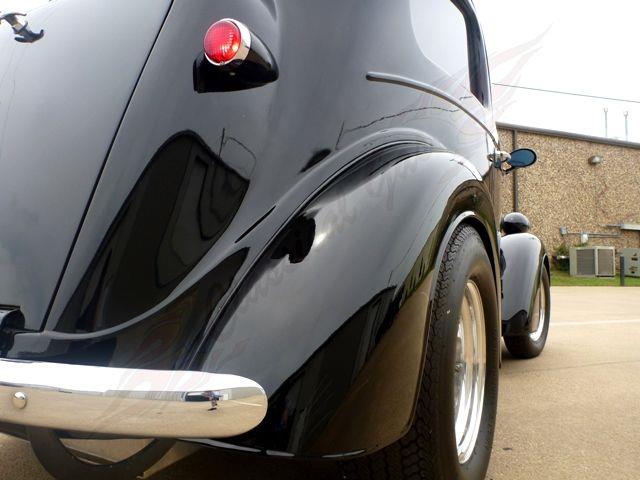 You may be surprised initially to see that this UK built classic is a Ford but that is indeed the case. The Ford Anglia's were produced out of the UK and primarily sold outside of the US. However, a few models designated as NASS cars (North America Sales and Service) were built to be sold in North America. These cars came with a 3 hole grill and are very uncommon. You rarely see Anglia's and when you do they have often been imported from the UK and turned into dragsters. That is not the case here. This 1948 Anglia has never been cut on or raced. It is quite possibly one of the rarest in the country and many top level judges for NSRA and Goodguys have remarked that it is one of the most detailed builds they have ever seen. For 50 years the car belonged to a school teacher in Joshua, TX. It was then purchased in 1997 after which it underwent an extensive restoration that wasn't finalized until 2008. There were only 17,000 miles on the original chassis which is known to be a fact. The school teacher originally purchased the car new from a dealership in Fort Worth, TX and strictly used it as a fun driver to the local store and back home. In fact, the original owner cared for the car so much that she never drove it on busy streets and strictly cruised down the road in the right lane. She would straddle the shoulder throughout the drive insuring that no one else drove too close. This story was confirmed during the restoration when it was noted that only the left side of the car had tar residue under the fenders from the road. The right side was completely clean.

The car is 100% all original steel and completely uncut except for the glass rear fenders. These fenders were added so a slightly wider tire could be put in the back without having to modify the steel. This is quite rare for an Anglia as most were chopped up to make room for big motors and slicks on the back. It is rust and bondo free throughout. At the start of the build the car was entirely deconstructed and dipped to remove all of the original paint. The frame was then boxed for extra rididity. It is coated in slick 2 stage PPG Black paint which works well with the body lines and has a great shine. All of the exterior chrome and trim is in place and has a clean finish as well. Since the restoration on the car it has continued to be improved upon further and just received full professional polish/detail. 1.17 emblems are in place on the front grill and are something you rarely see in place. Many features like the rear trunk straps are all original and in beautiful condition. It is hard to believe that all of this is from 1948. All of the rubber and glass on the car is fresh and the builder was so meticulous that all of the weather strip seams are in their exact factory location. A really unique feature on the car are the dual turn signal semaphore flags which pop out on each side of the car to indicate what direction you are going. You never see those type of options and things like that are always a great conversation piece at car shows. Polished Centerline wheels sit under all 4 corners and give the car a little tougher look. The wheels and tires were replaced within the past year.

Powering the car is a Kenny Bell 3.8 liter V6 that has just been completely gone through and rebuilt. Why not a 350 V8? Well there are multiple reasons for that, 1)it would be a shame to put such a common motor in such a unique car 2)it is one of the only engines that would realistically fit without cutting on the firewall. The rebuild was completed by Don Burlington in Kansas City who is a very highly regarded builder. During the process the motor was completely pulled from the car and received a .060 overbore, new GM crank assembly, new flat top pistons, new piston pins/keepers/rings, a new crank, new rod bearings, new Cam-II camshaft, new camshaft bearings, a new timing chain, new seals/gaskets, new oil pump with external filtration system and new water pump. The heads were also rebuilt to include porting, new larger stainless steel valves, new valve guides, new valve springs/retainers and keepers. They were carefully shaved to achieve a true flat surface which increased compression a half a point. Backing the motor is a B&M BOP375B automatic transmission which is basically a 350 housing with 400 components. While the motor was out a new torque converter with 2300 stall was installed. This sends power back to the Currie custom Ford 9 inch rear end with new 3.25 gears which makes it very highway friendly. Wilwood racing disc brakes are in place under all four corners and up front is the custom Fatman Mustang II front end. Other drivetrain components include the T&D needle bearing rocker arm shafts, new 4 barrel carb, Weiand intake, Mallory ignition, tilton starter, new stainless exhaust, stainless gas tank, aluminum drive shaft (balanced) with new heavy duty U joints, brass radiator and Mark Williams 28 spline axles with 5/8 inch studs and special locking axle nuts. As if the car isn't unique enough already it was also constructed using either stainless or titanium bolts. These titanium fasteners are aircraft high sheer/high lock nuts and bolts from the B1/B2 program. The exhaust is also polished mill specification stainless tubing from the B2 program. This full rebuild was done in the last 240 miles resulting in a drivetrain that has many many miles and years ahead of it. We are sure we missed some of the details but it was fully deconstructed and reconstruction with all top of the line components and done by a very knowledgeable professional with many years in the business.

Not unique enough for you yet? Well how about the interior switches in the interior panels which came from the Space Shuttle program? Or all the one of a kind billet mounts created by the builder? If you haven't realized it yet, you just aren't going to find another car like this. All of the interior upholstery was done by Shawn Cook who is known across the US for his beautiful interiors. The seats are extremely comfortable and came from a BMW. They utilize Saab shoulder harness to keep you safe and are covered in high quality Beige leather. The rear seat bottom was just redone with high density foam which makes it much more functional than it was previously. A cloth roof insert is in place and was fabricated from Mercedes convertible roof material. An alpine stereo is in place on the dash as well as VDO gauges which are mounted in custom bezels. The car was originally built with a woodgrain steering wheel which was changed out for a Black Grant steering wheel for comfort reason. Both come with the car so if you decide the woodgrain is more your style it will be with it to reinstall.

This vehicle is being represented for a collector in Kansas City, Missouri.