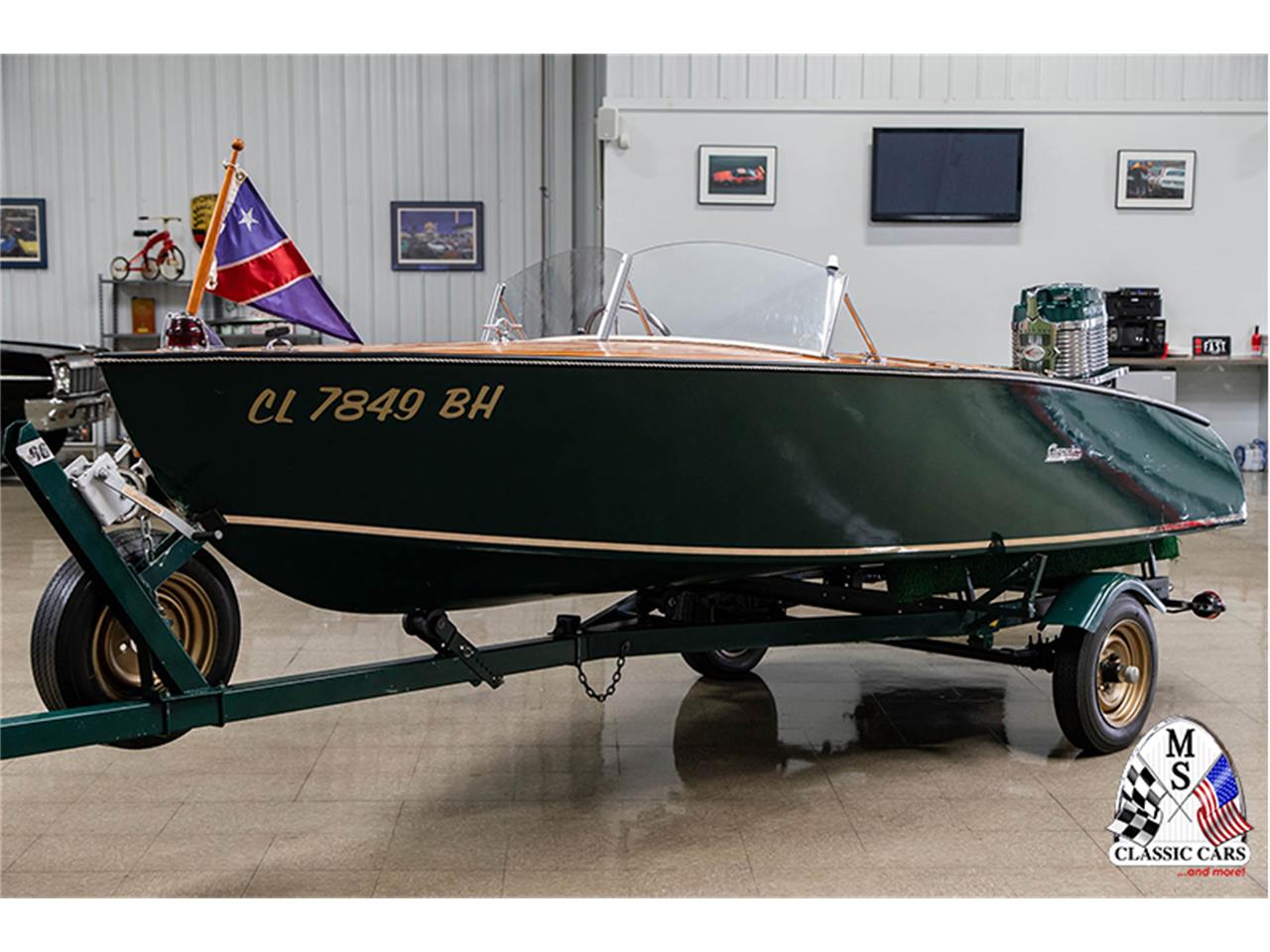 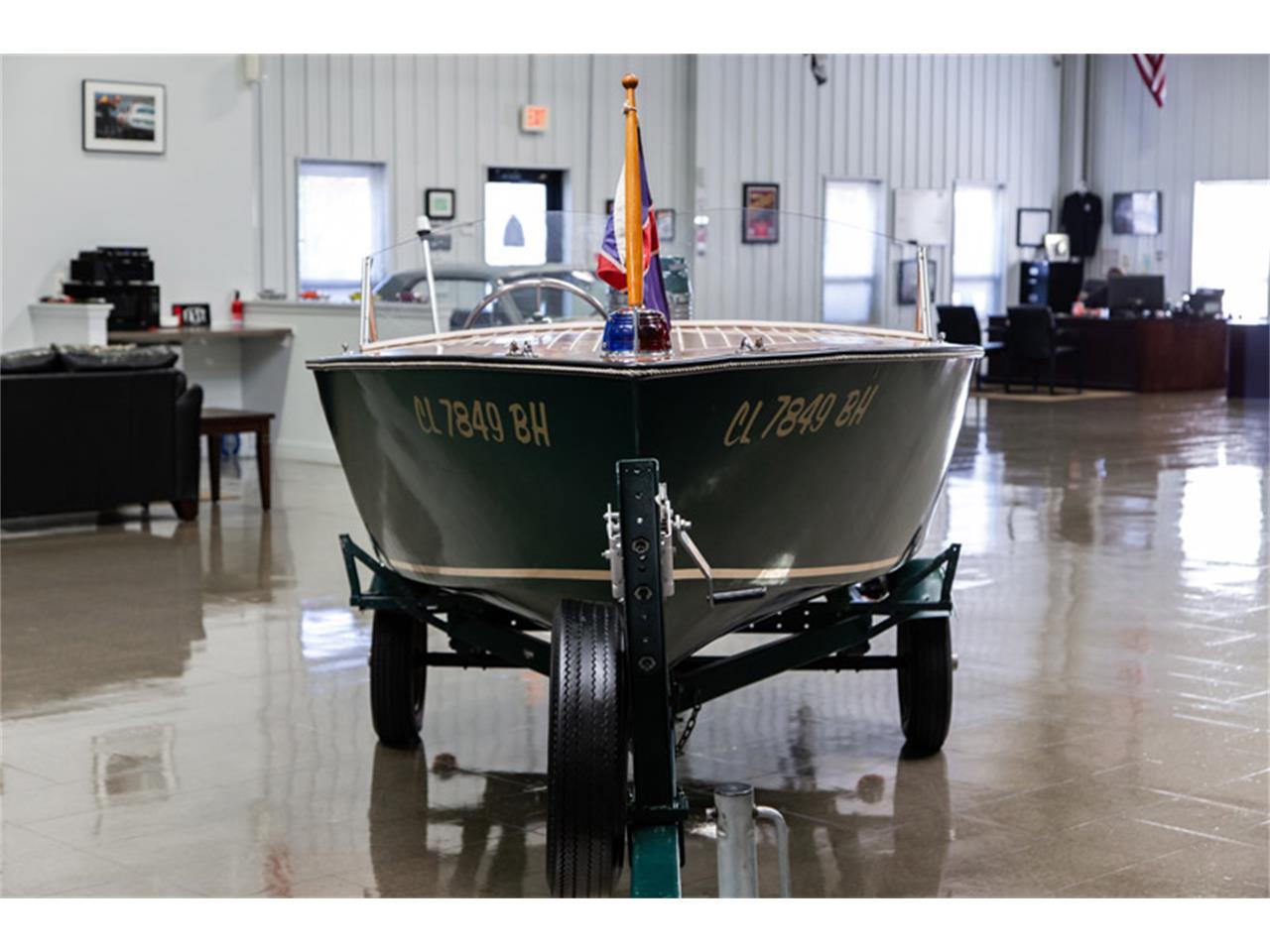 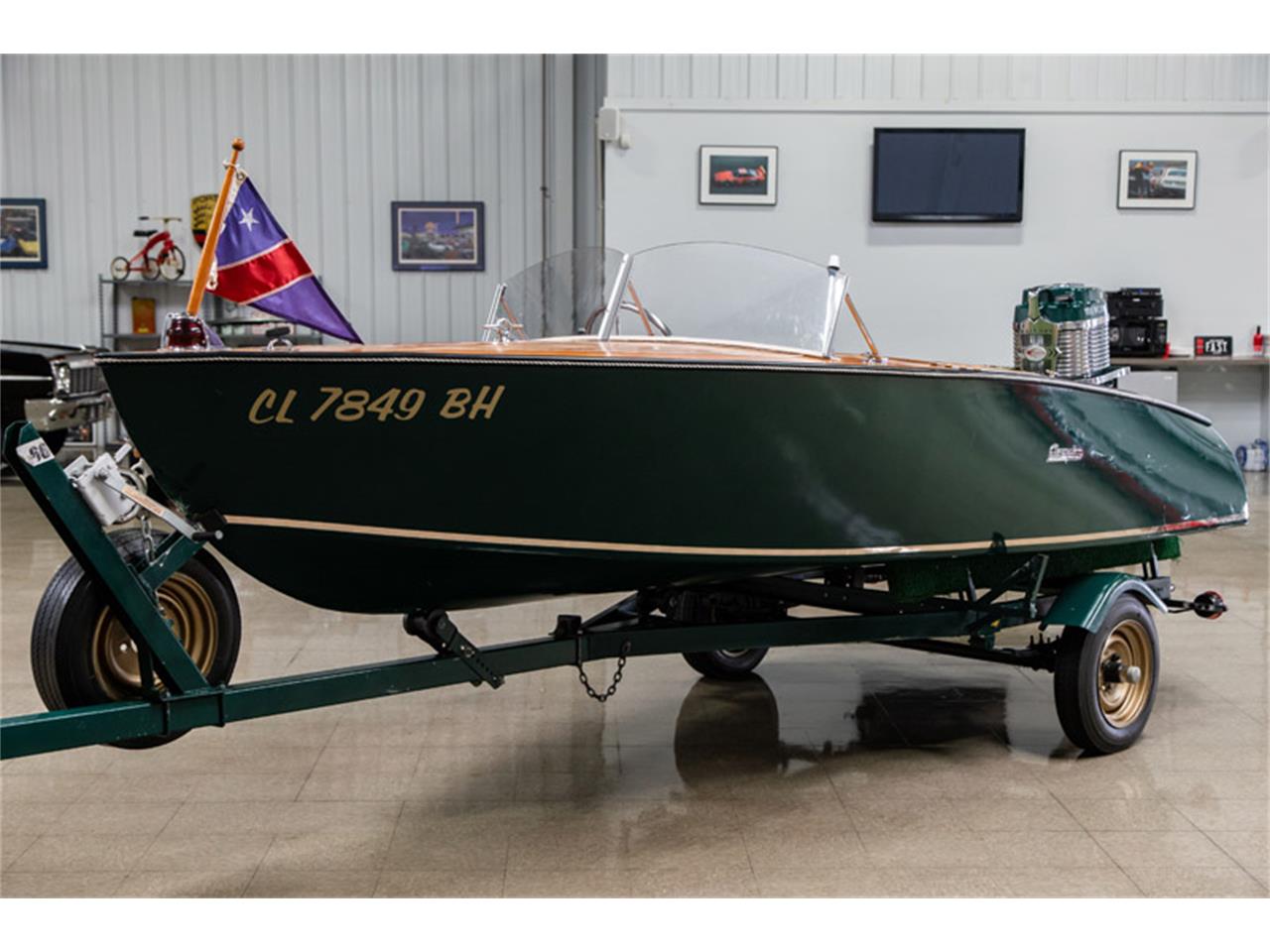 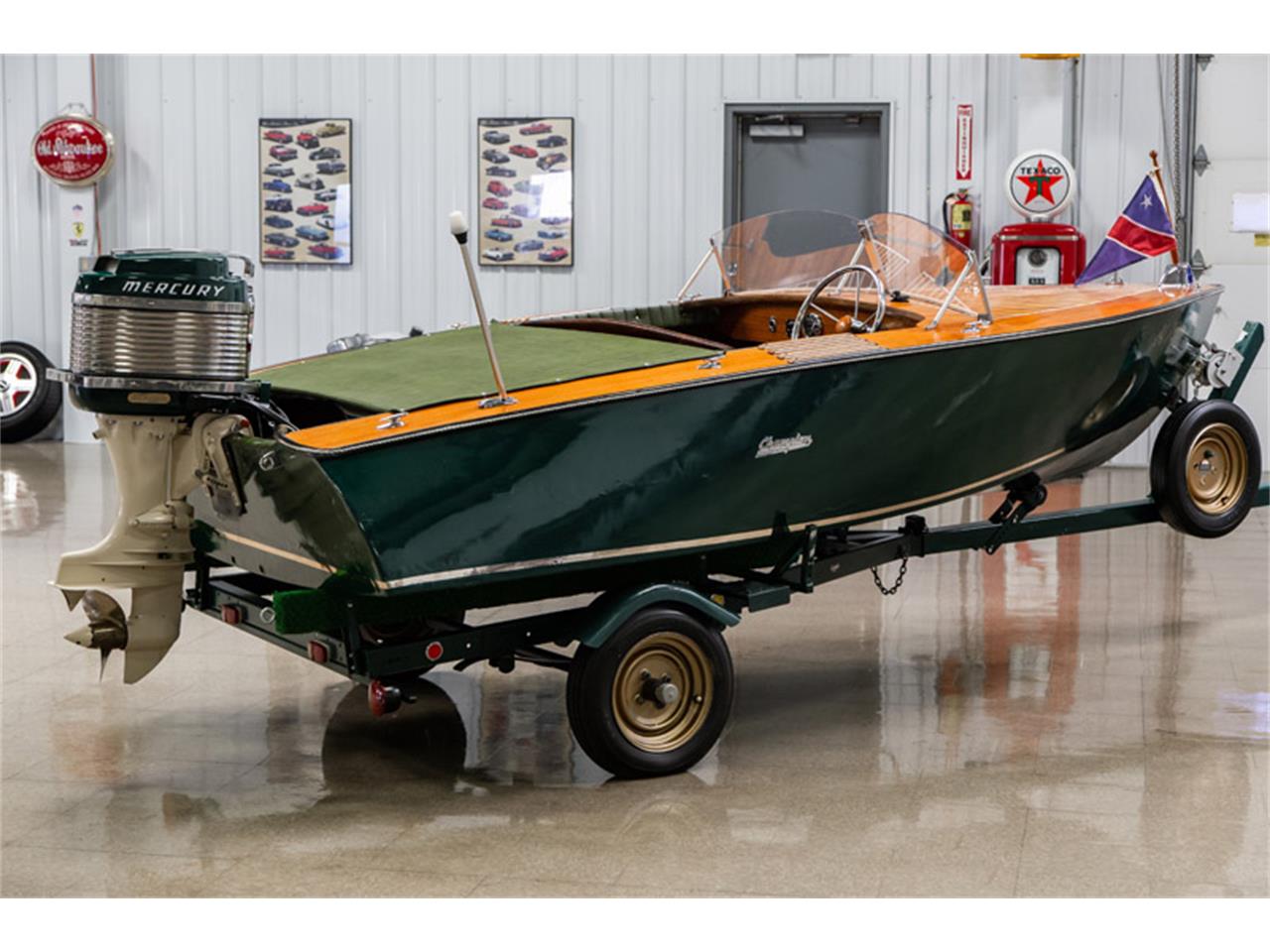 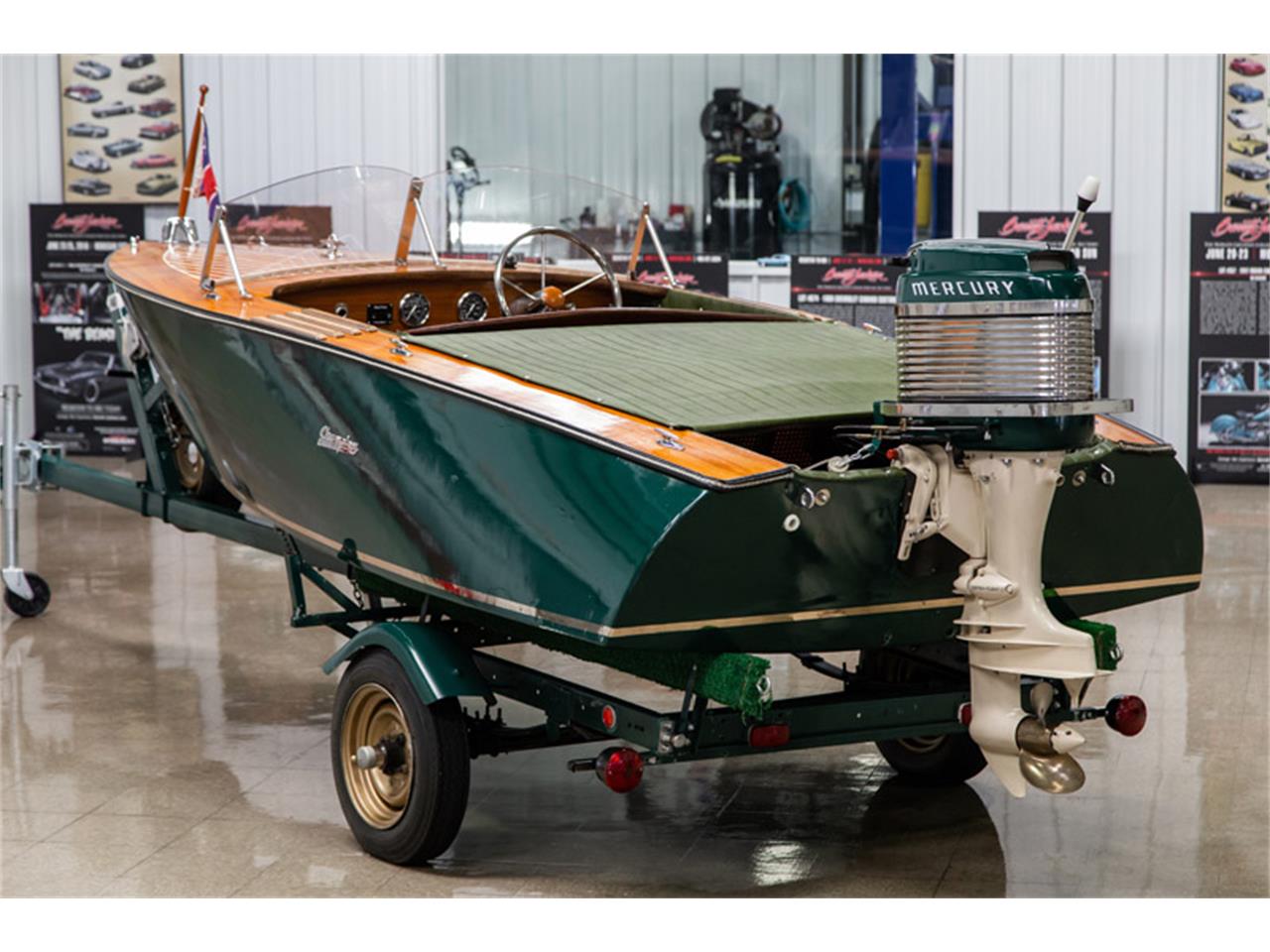 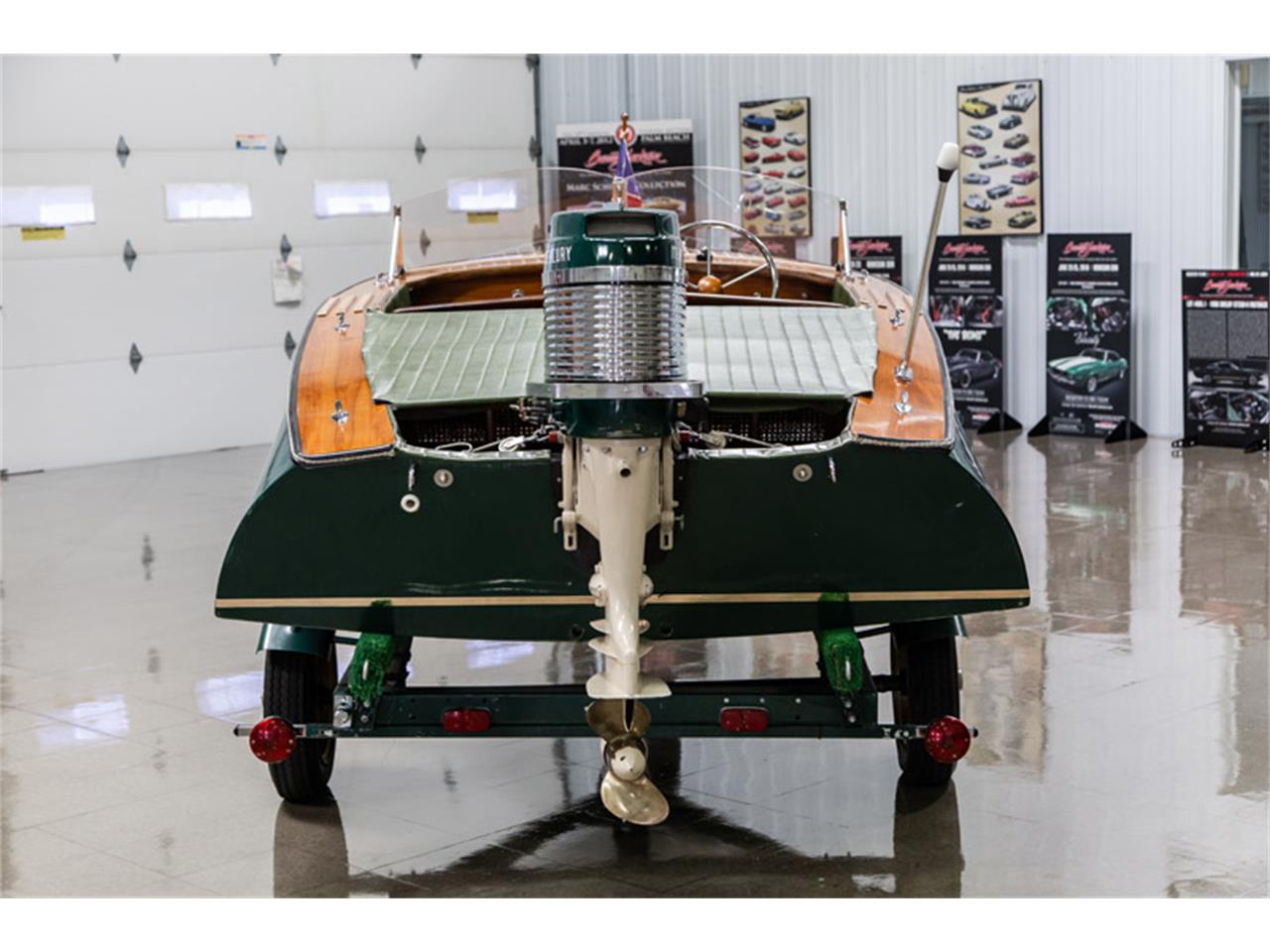 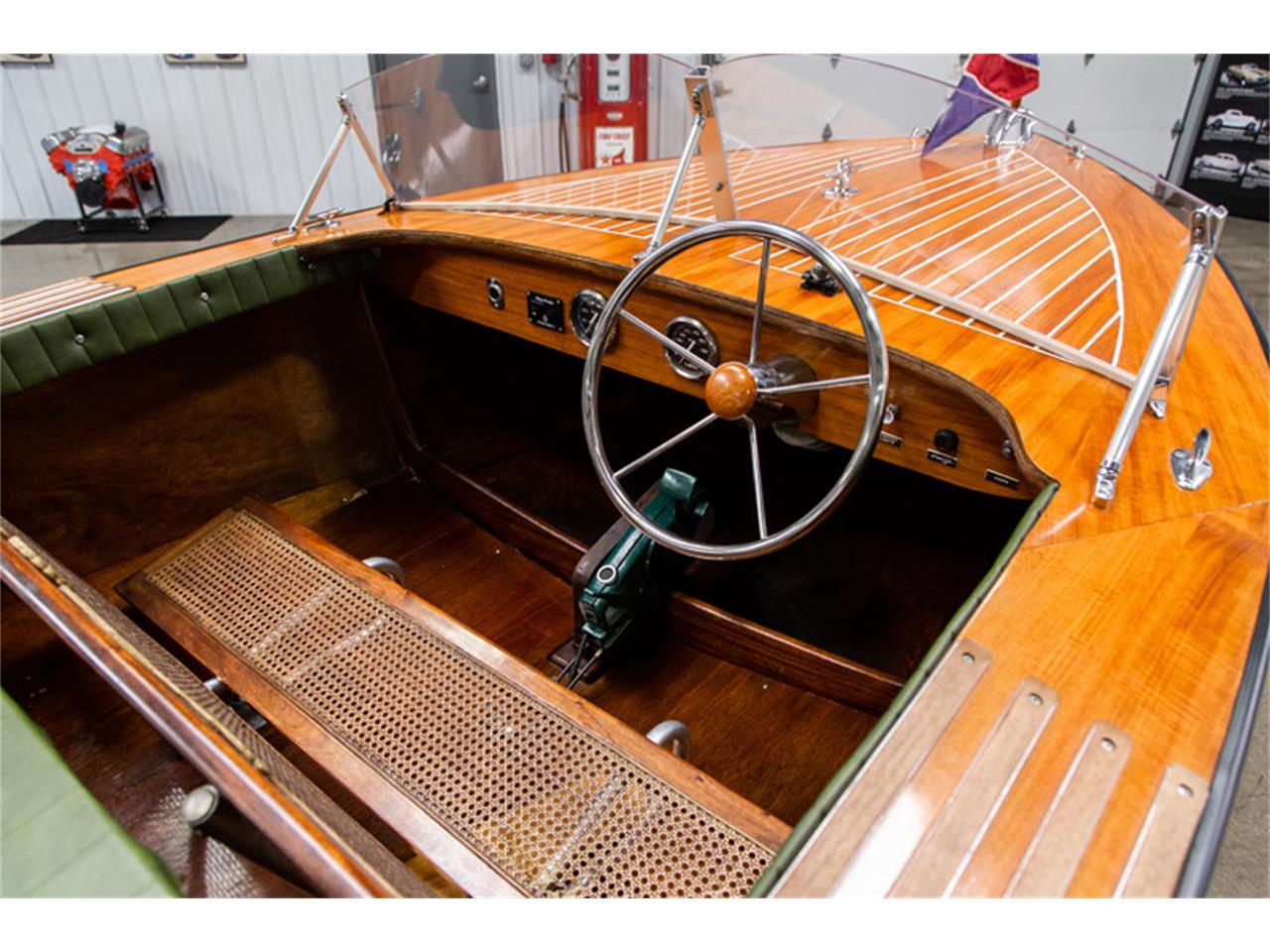 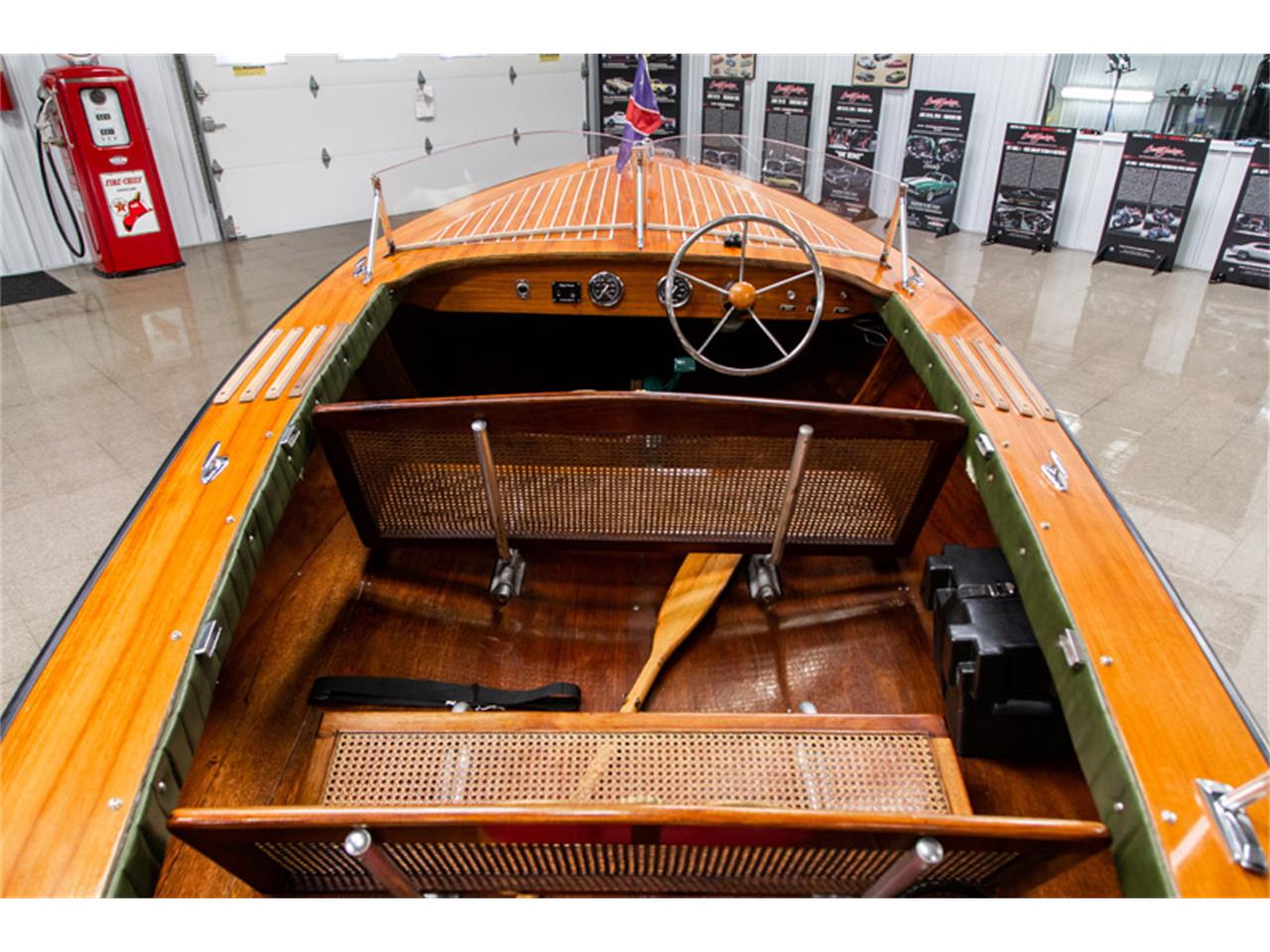 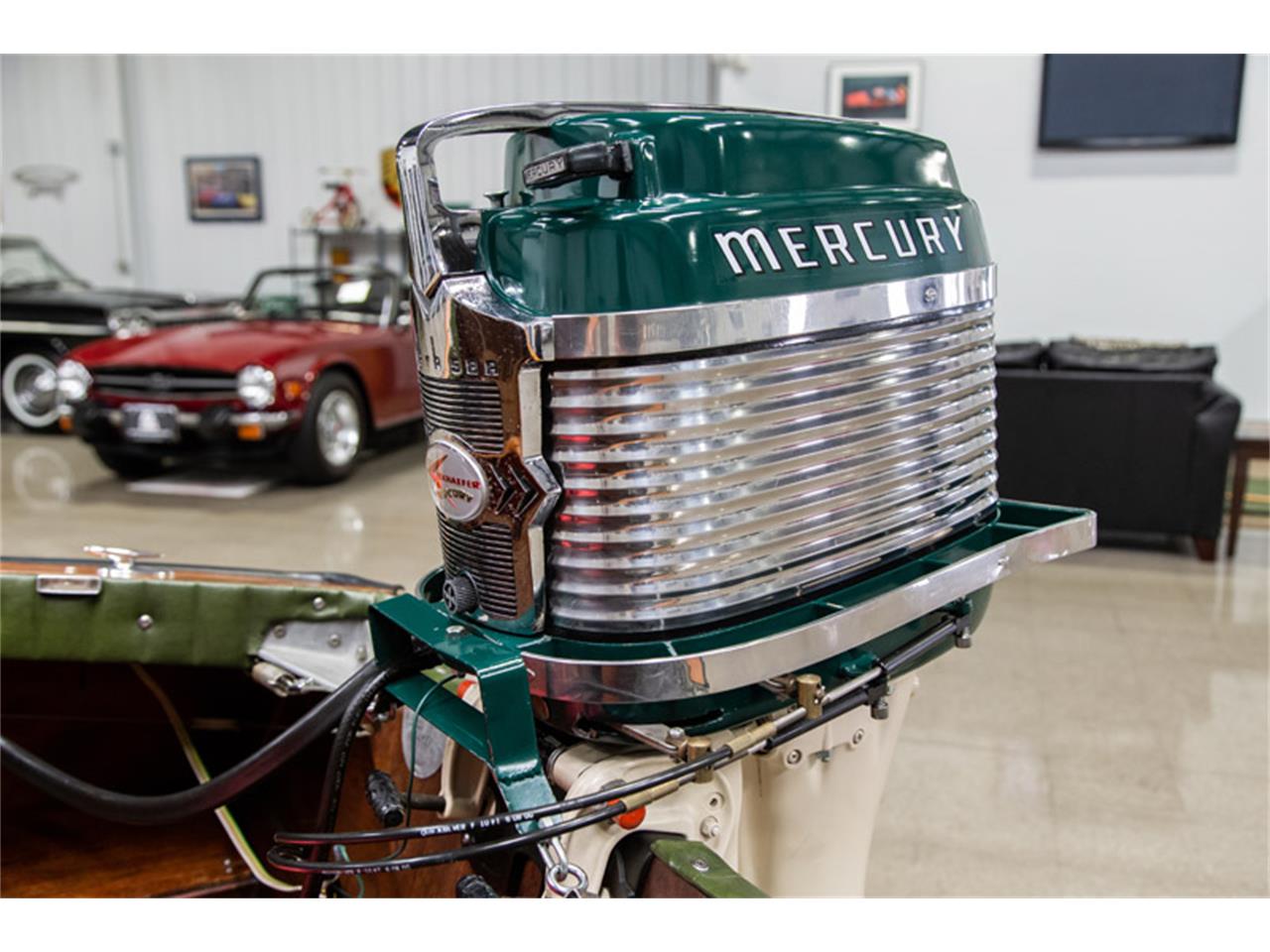 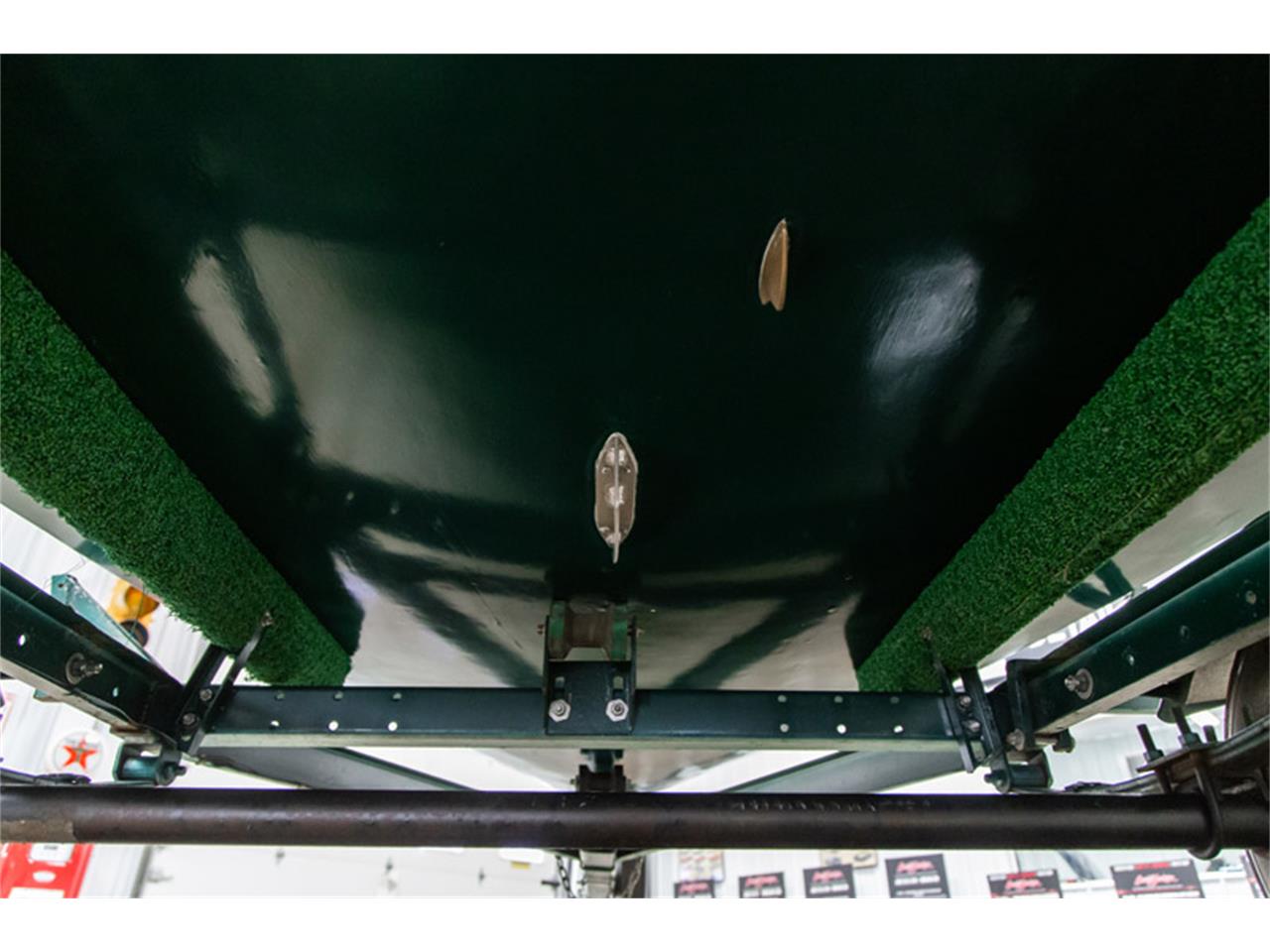 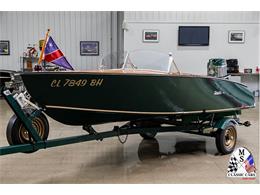 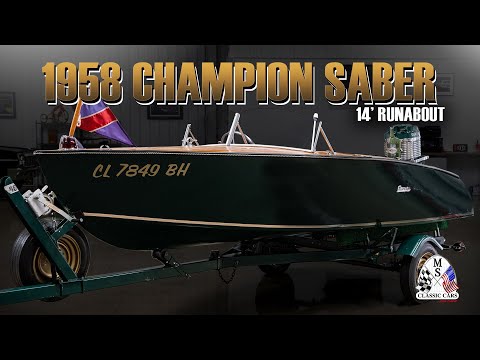 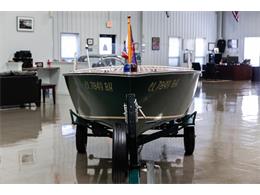 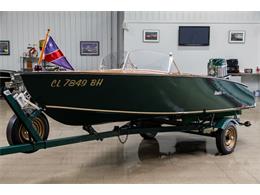 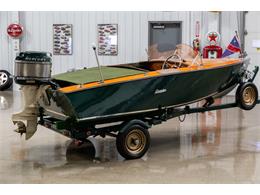 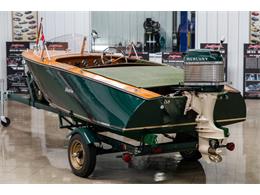 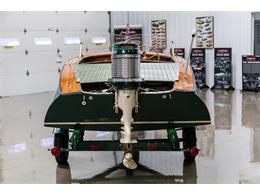 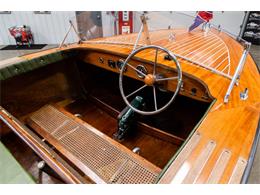 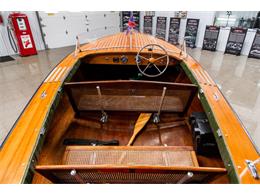 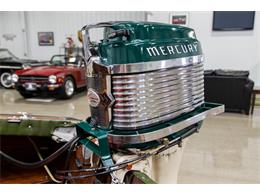 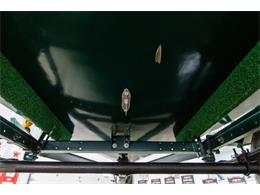 **THIS BOAT IS CURRENTLY SELLING LIVE ON A HEMMINGS ONLINE AUCTION. THE AUCTION END DATE IS MONDAY NOVEMBER 23RD @ 5:00PM EST. IF YOU'RE INTERESTED IN PURCHASING THIS BOAT PLEASE REGISTER DIRECTLY WITH HEMMINGS. IT'S A QUICK AND SIMPLE PROCESS. THANK YOU AND GOOD LUCK!**

It has been clocked at 32 MPH on the Chatfield Reservoir in Denver, CO with two people on board which is documented by the state of Colorado

It was surveyed by Azimuth Marine on October 1st, 2020

This classic 1958 Champion Saber 14’ Runabout Hull Serial #1862 has been named “The Elk River Queen”. This seldom seen make and model draws attention wherever it may be. It was fully restored by Bob Gilliam which is documented with receipts and photos that are included. The combination of the Mahogany wood and Kelly Green is beautiful. It has an open cockpit with two wicker seats, Faria gauges and a covered foredeck. It is powered by a rare custom 1959 Mercury Mark engine with Super Thunderbolt power head. This engine produces over 50HP. It has been clocked at 32 MPH on the Chatfield Reservoir in Denver, CO with two people on board which is documented by the state of Colorado and included. It was surveyed by Azimuth Marine on October 1st, 2020 which is included. This is a great runabout that will bring smiles whether it’s a display piece or enjoyed in the water. Trailer included.

This 1958 Champion Saber 14’ Runabout Hull Serial #1862 was built by The Champion Boat Company in Long Beach, CA. The original builder’s serial plate is still intact and legible. This boat was found at Lake Dillon in Dillon, CO in 1995. The boat was complete with trailer but both needed a restoration. Prior to the restoration it had a 97 sticker with the Official #CL 7849 BH which can be seen in the photos that are included. It was also equipped with a Johnson 40 outboard engine which can also be seen in the photos that are included. Bob Gilliam started the restoration in 1996 and completed it in 2001. An itemized categories report and some photos of the restoration are included. This was a comprehensive restoration. Everything was restored or replaced during the restoration including the engine. In 2001, it was clocked at 32 MPH on the Chatfield Reservoir in Denver, CO at 5000 ft. elevation with two people on board which is documented by the state of Colorado which is included.

MS CLASSIC CARS invested a total of $650.00 having this runabout professionally surveyed by Azimuth Marine on October 1st, 2020. The entire report is pictured within the photo gallery and included. The report provides very detailed information with all the vessel particulars. As the report states, “restoration does not appear to be up to the standards of museum quality restorations as generally understood. Nonetheless it is an unusual vessel with a solid restoration effort that presents very well overall.”

The Mahogany plywood exterior is in very nice condition overall with only minor imperfections. It has synthetic cloth and polyurethane adhesive over the outside from rail to rail. It was finished in Kelly Green which dresses it well. The paint and varnish are in good condition. The chrome deck fittings are in excellent condition. It’s equipped with a front and rear light which are both in working order.

The interior is also in very nice condition overall. The inside green padding has a few small tears. The chrome steering wheel and the Faria black face gauges look great. The wicker front and rear bench seats were handmade and decorated tastefully. There is a section on the wicker seat where the driver sits that has come unglued. The gauges, lights, horn and ignition is in working order. A green rear cover is included.

The runabout is powered by a rare custom 1959 Mercury Mark engine with Super Thunderbolt power head. The engine model number is 55E. Most people would think it’s a 58A. Only a purest would recognize this engine as a sleeper. This modification was standard for the “E” class racing motors. The gain is 25% more power with no increase in weight. While it is possible to put the large KA carburetors on the smaller powerhead, enlarge the openings into the block and change the reed blocks, it is much easier to install a Mercury 500 powerhead. It also has 10% more displacement. Now from a practical and maintenance standpoint, this engine is a 44cu/in non-power dome block, complete with the Tillotson KA carburetors, Kiekhaufer magneto and electric choke that the 1959 Mark 58A’s had. The Mark 55 did not have any of these components. The cowl is a 1959 square top model. This power head came from a 1961 Mercury 500 serial #1509524. The lower unit is a Type II gear housing assembly common to all of the Mark 55 and Mark 58 models. It has the same 14:23 gear ratio. This engine was completely rebuilt during the restoration. It was recently serviced by MS CLASSIC CARS and runs excellent. A start up and running video is available.

**Please note, as indicated on a February 18th, 2015 service invoice the motor does not have a reverse gear. If the new buyer wanted reverse gear it would have to be rebuilt which would be challenging due to parts availability.**