For Sale at Auction: 1990 Ferrari F40 in London, United Kingdom

Classic and collector car insurance for as low as $273.00*/year
* Payment estimates are for informational purposes only.
Need help with finance, insurance or shipping?
Let our Resource Guide help you find those important things you need to buy the car of your dreams. 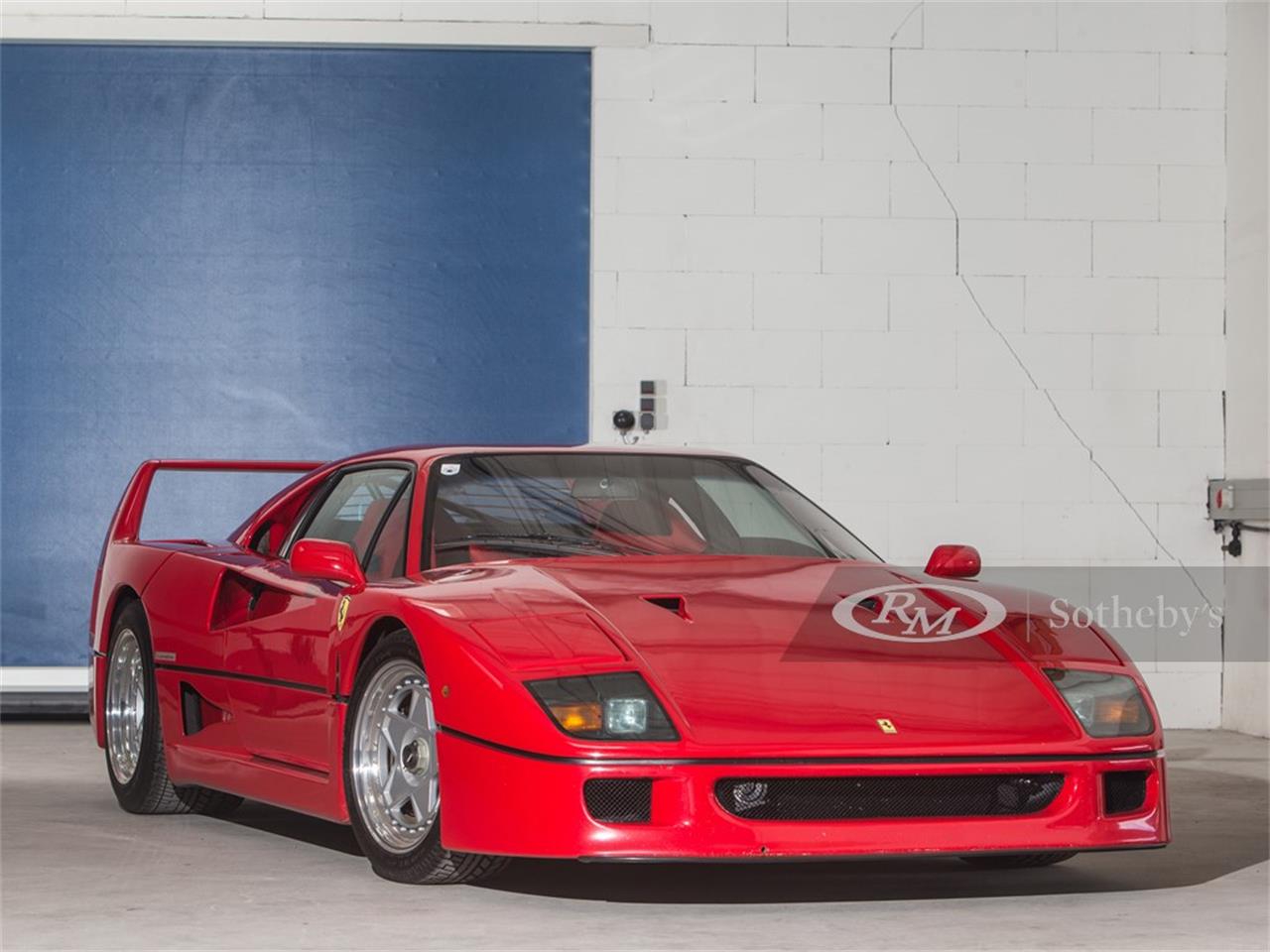 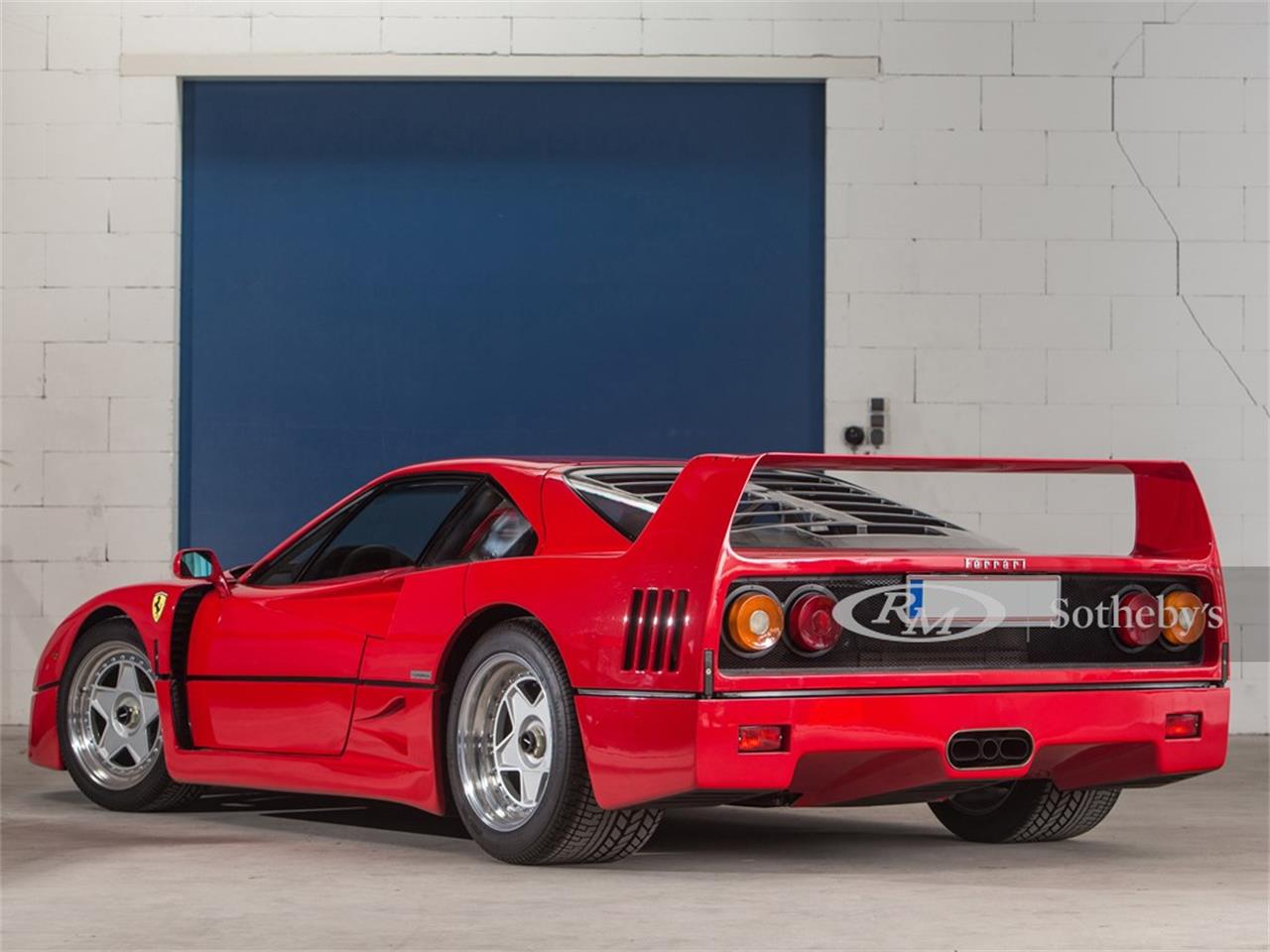 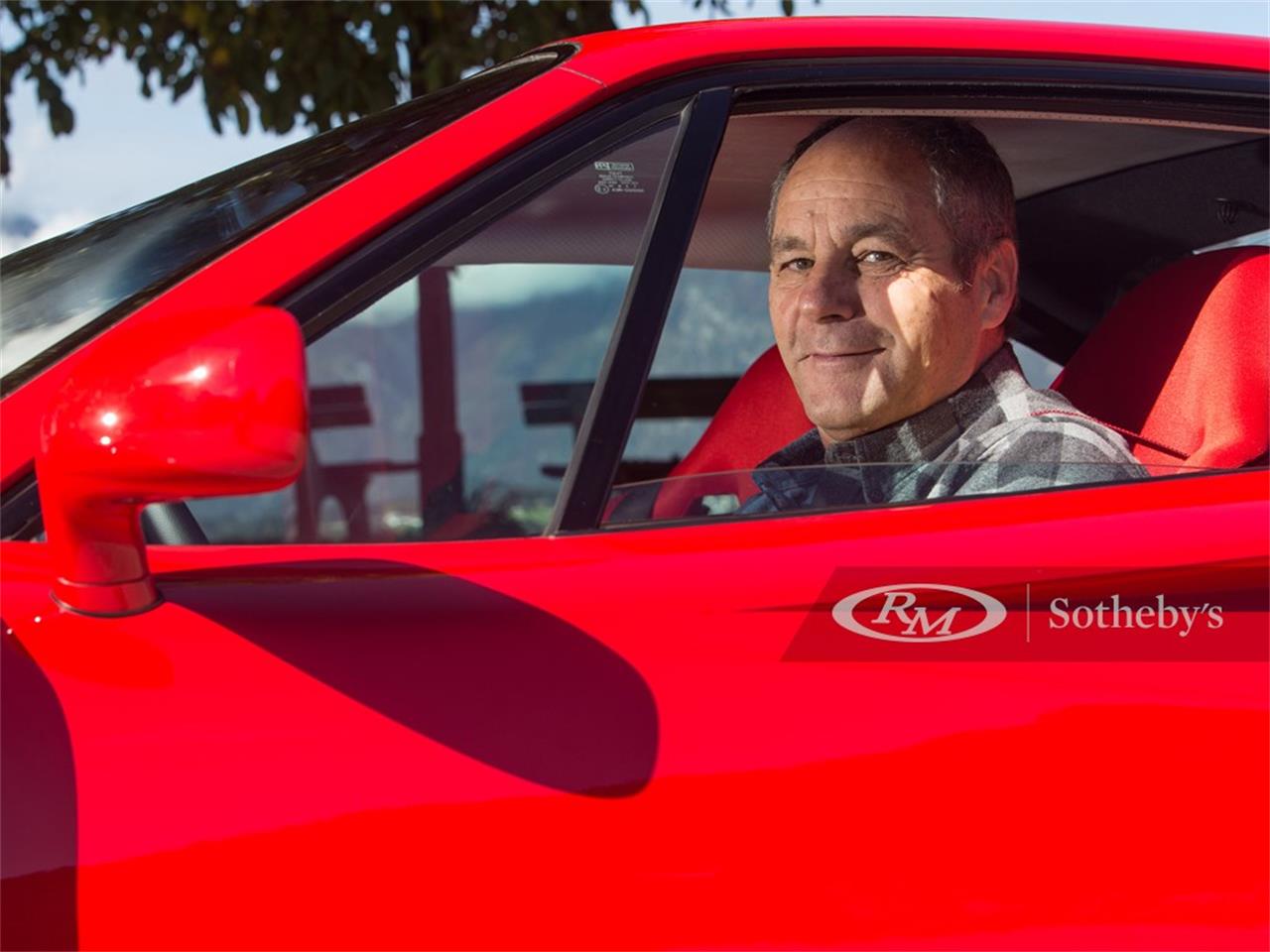 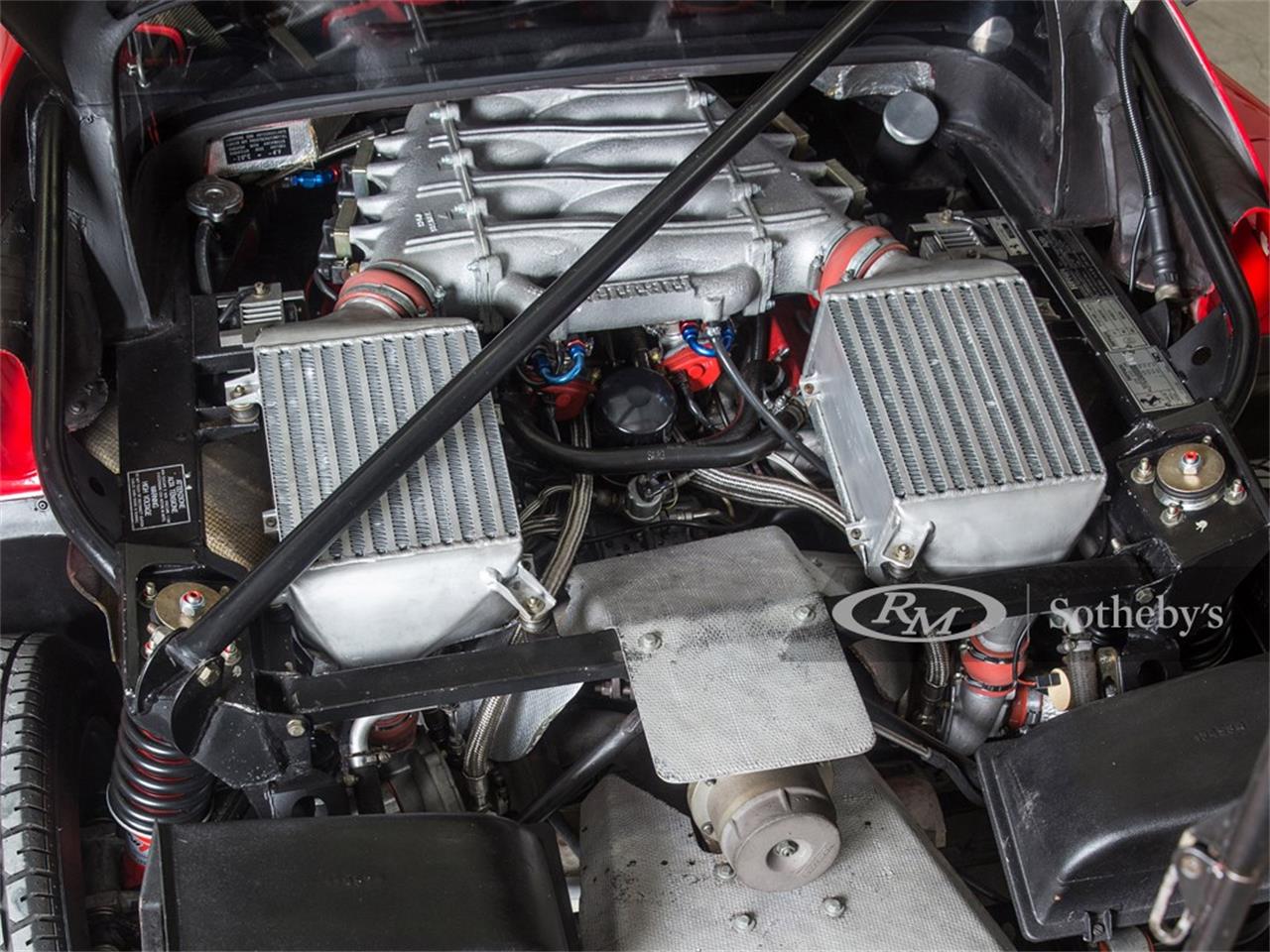 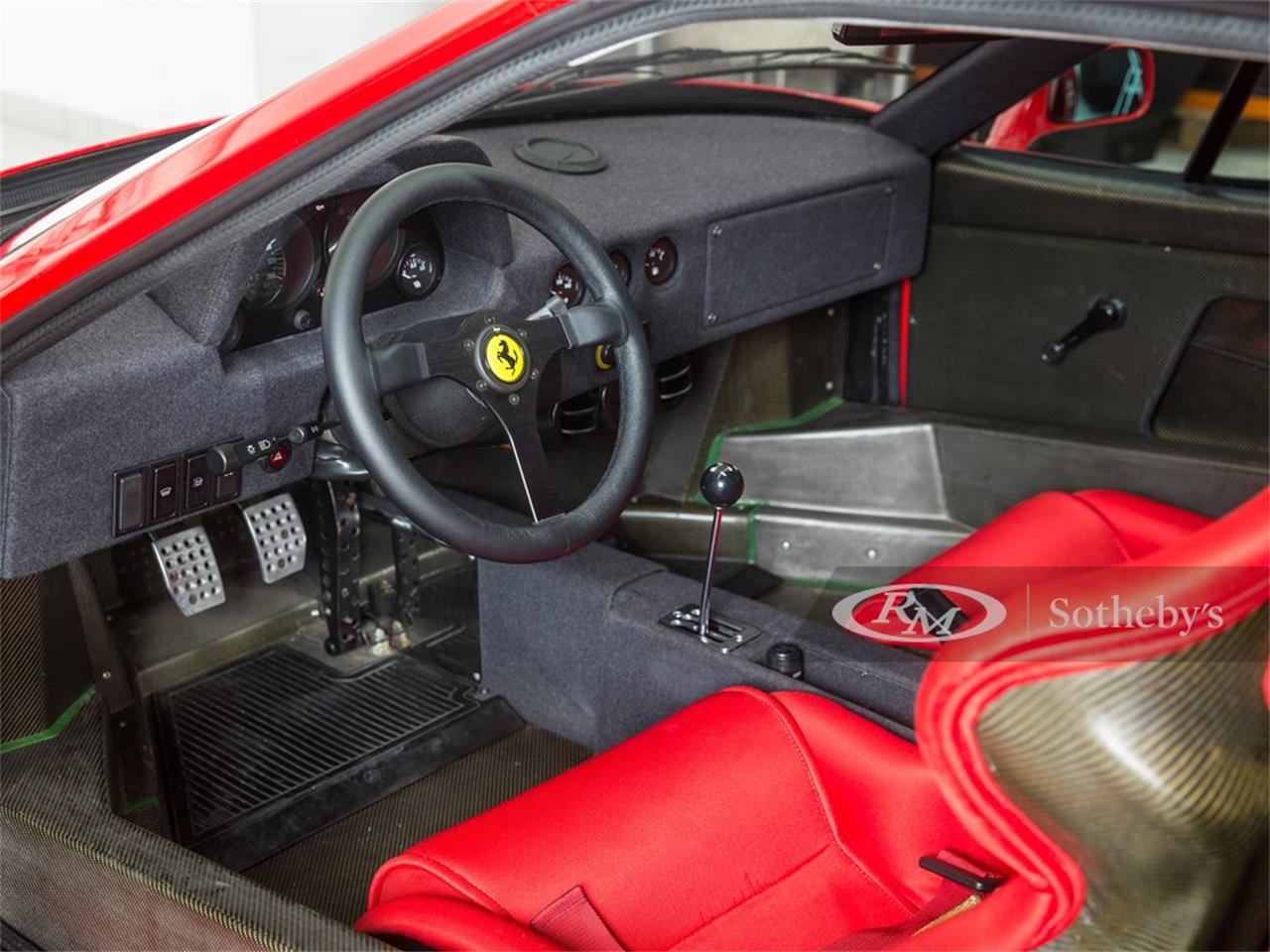 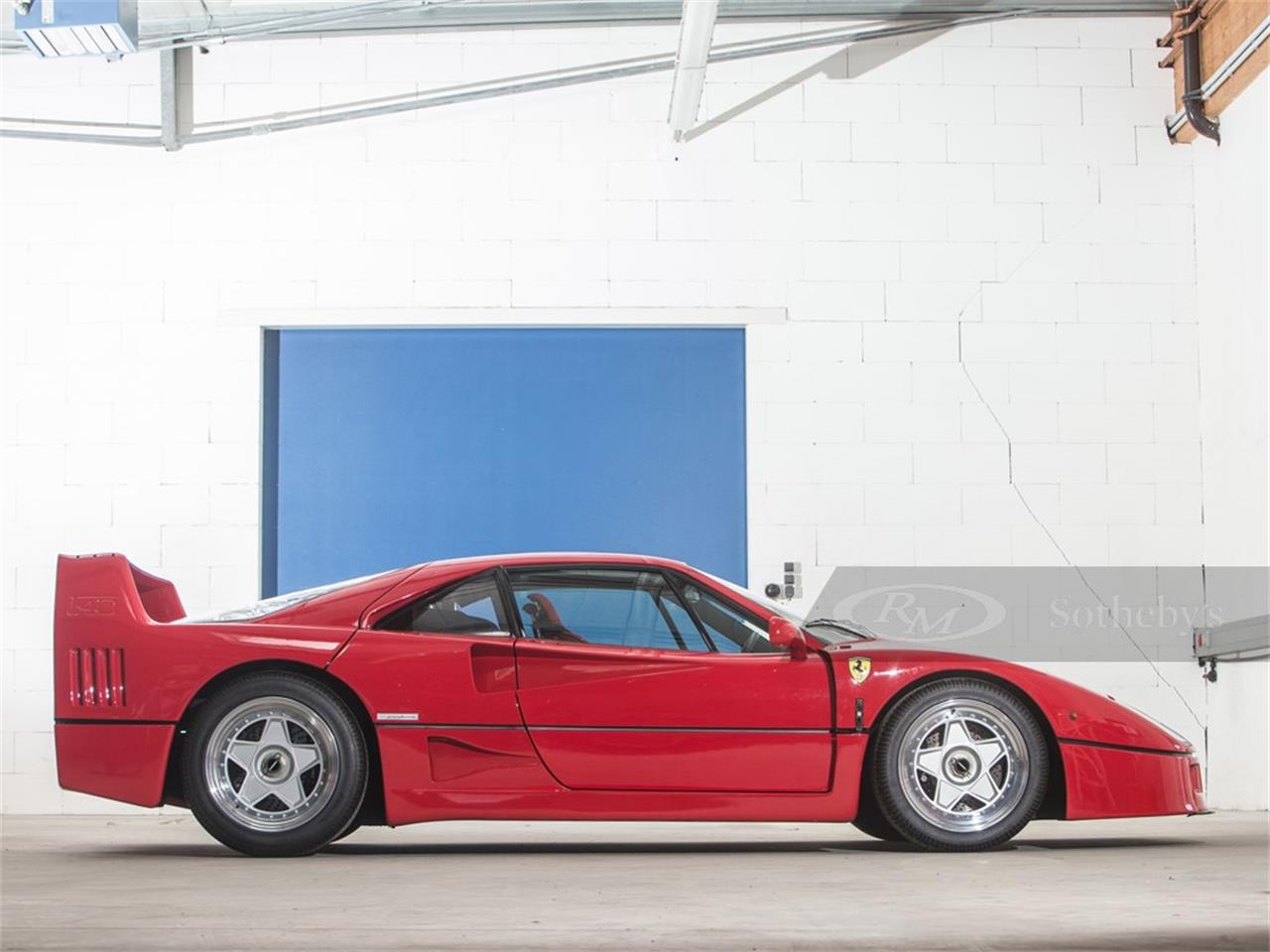 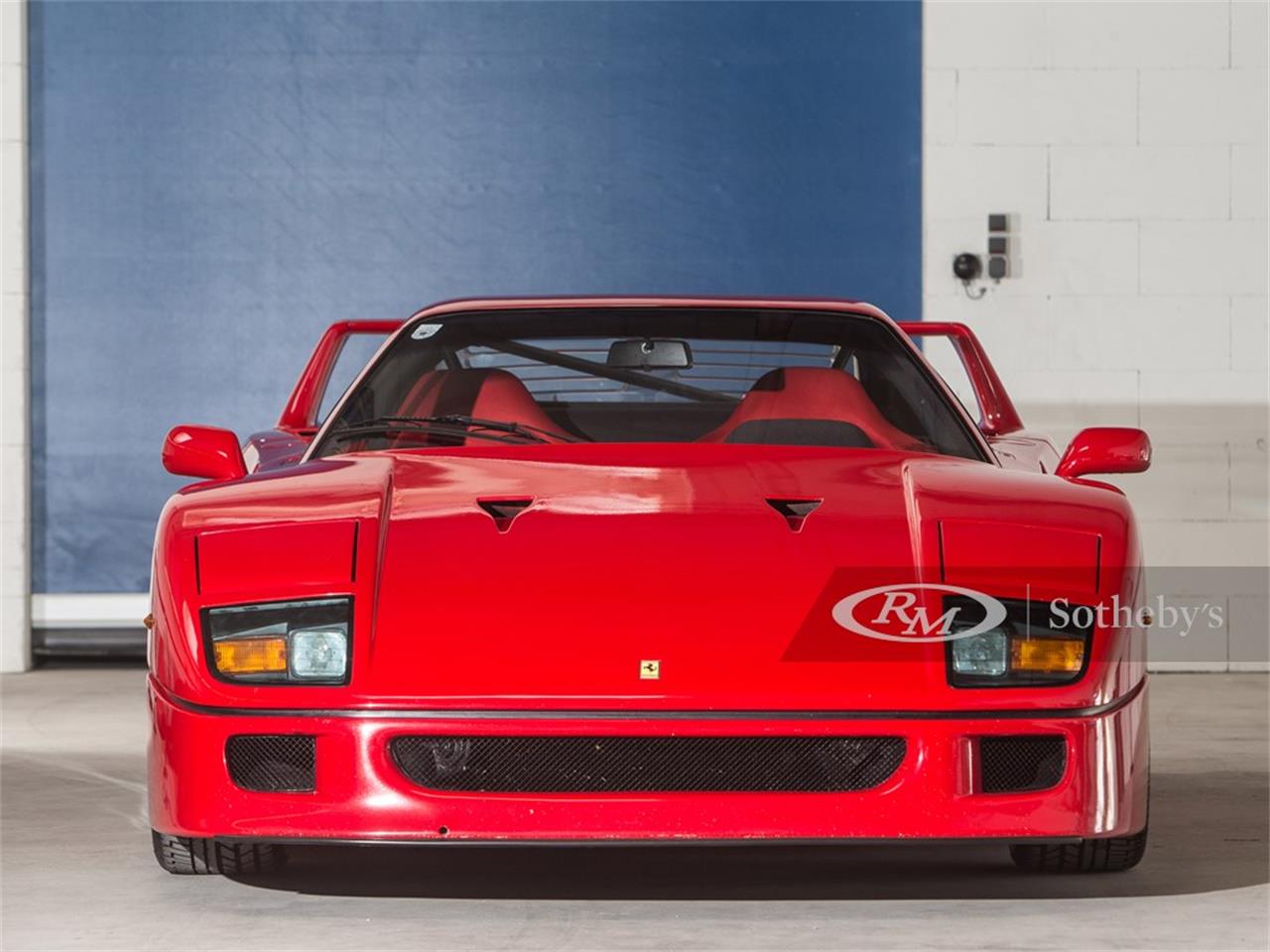 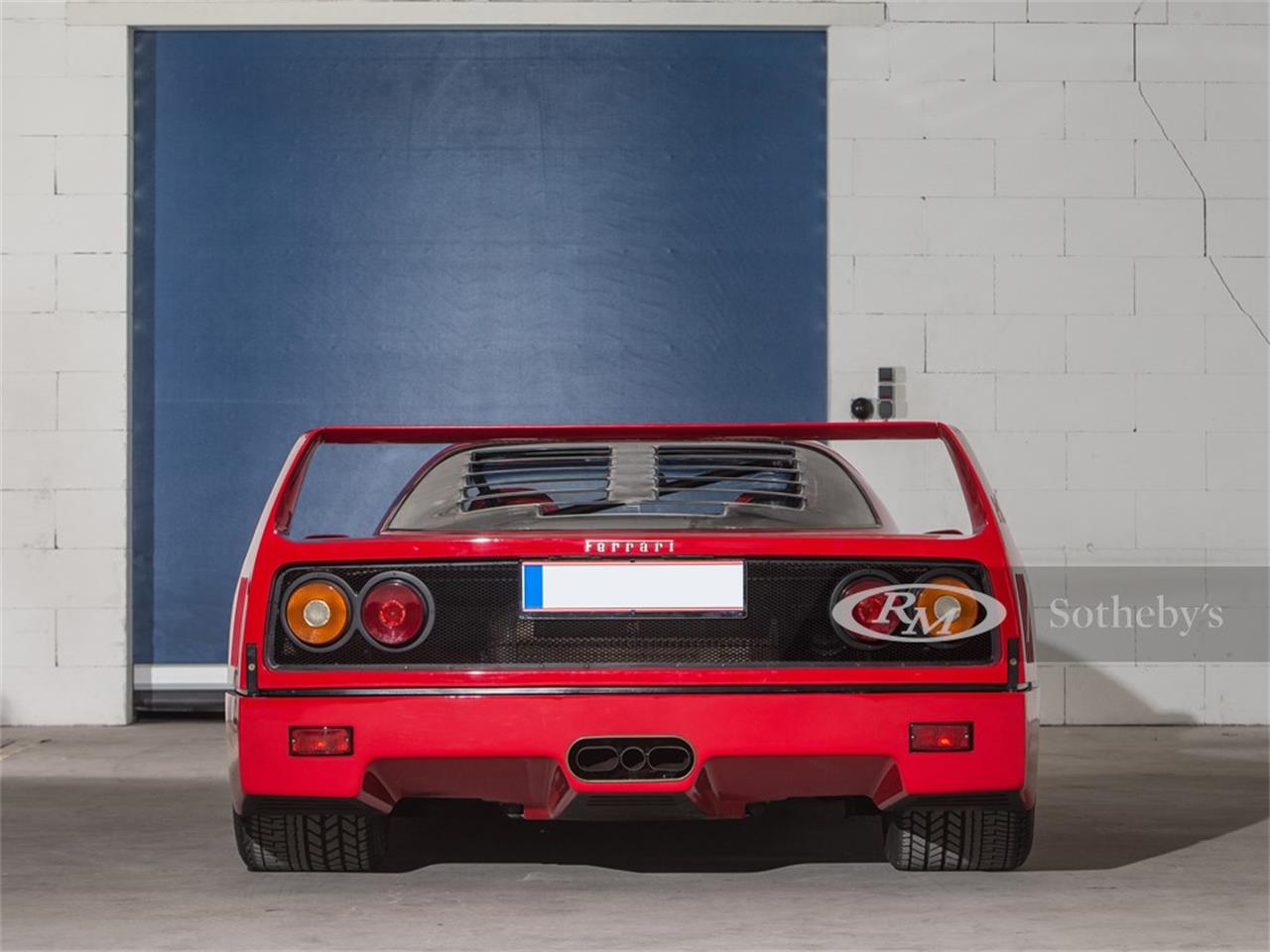 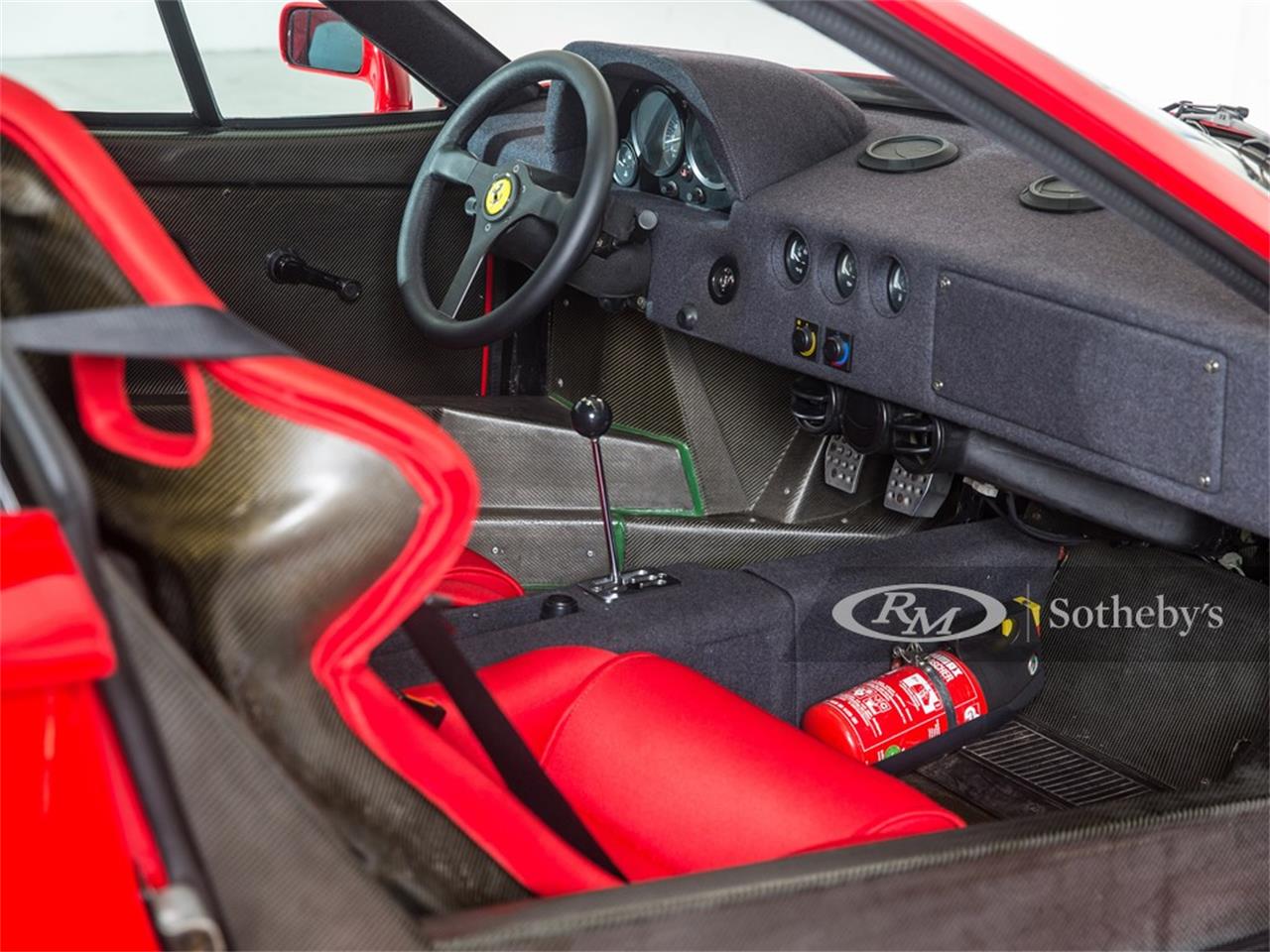 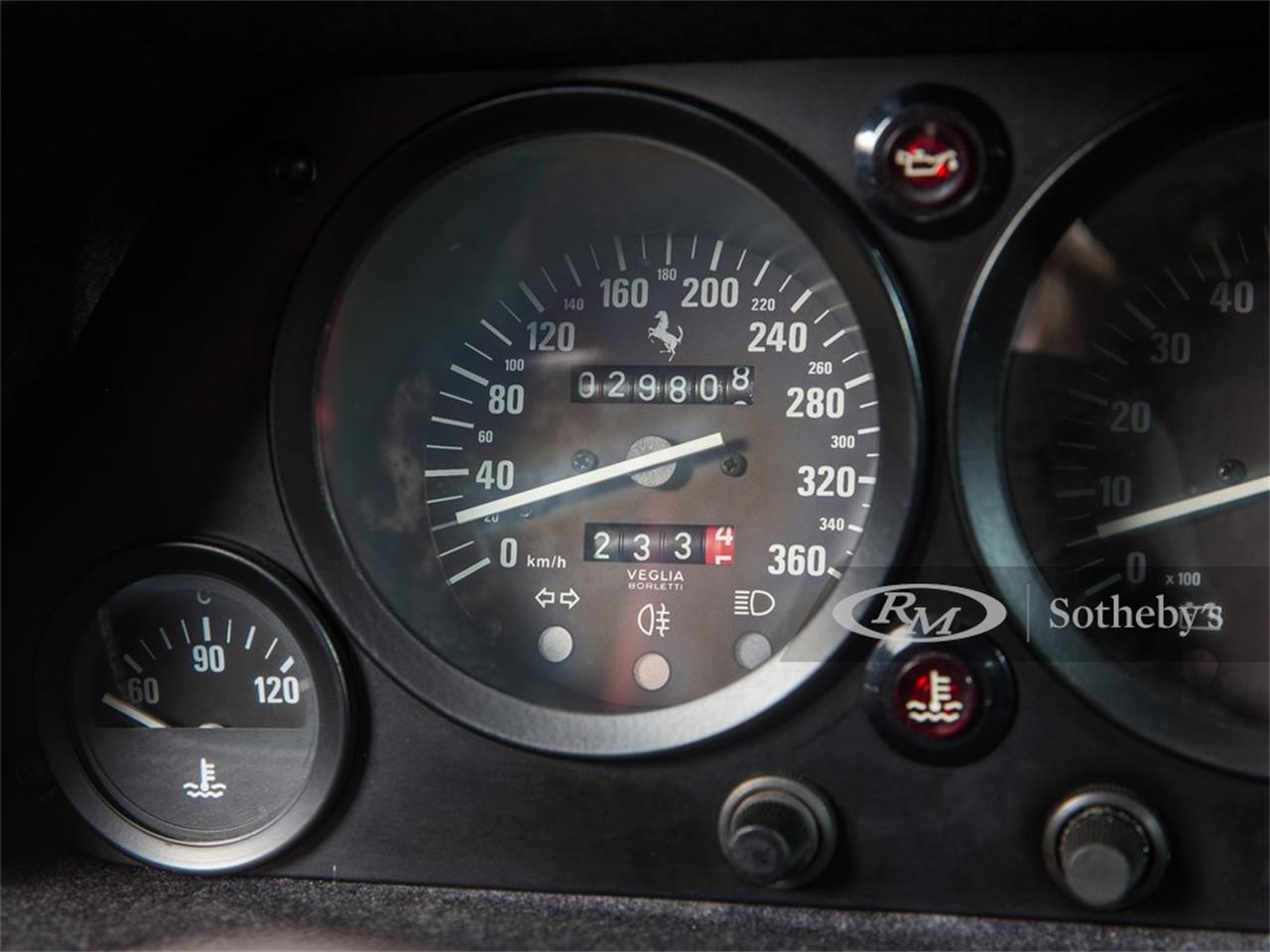 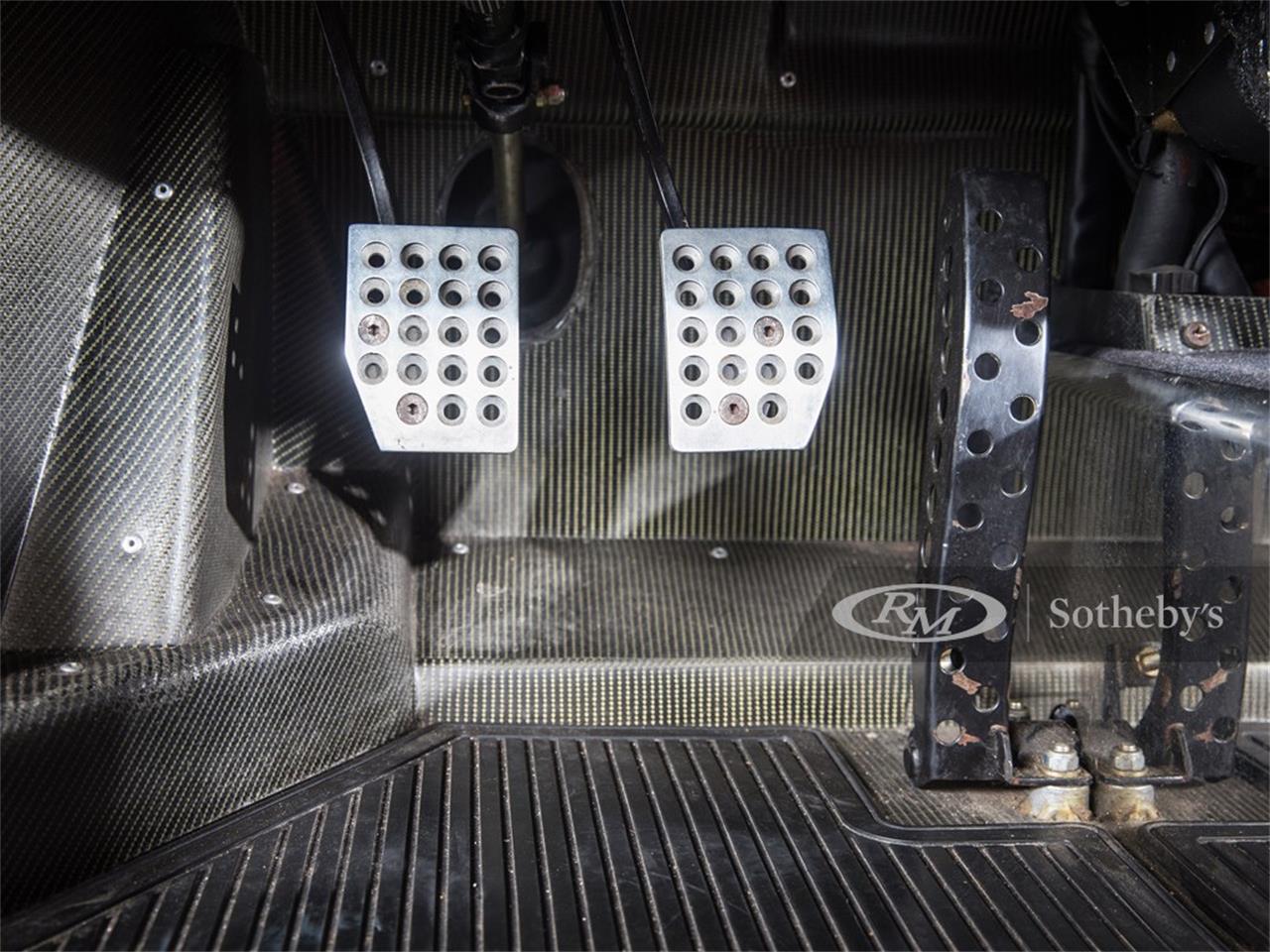 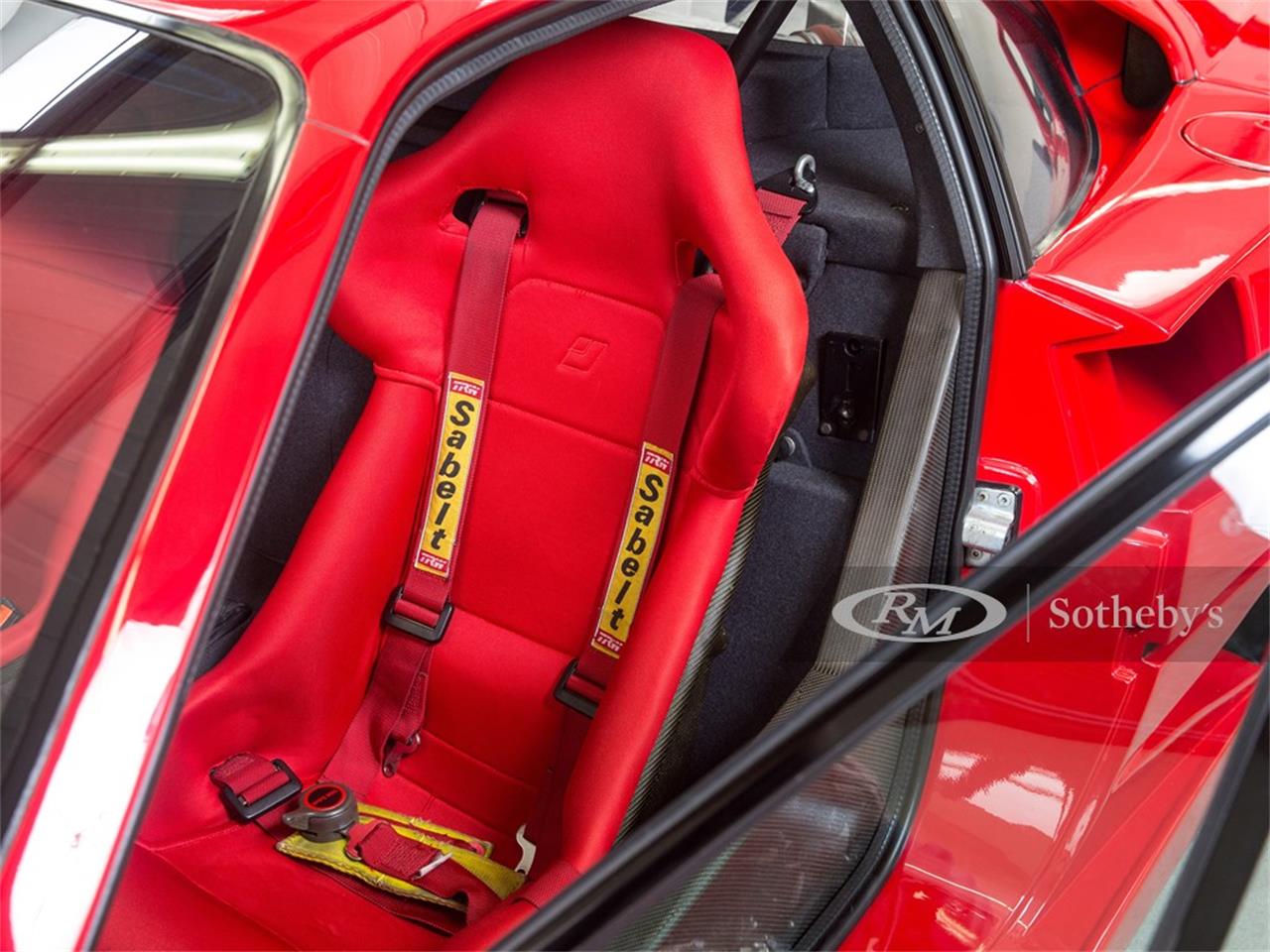 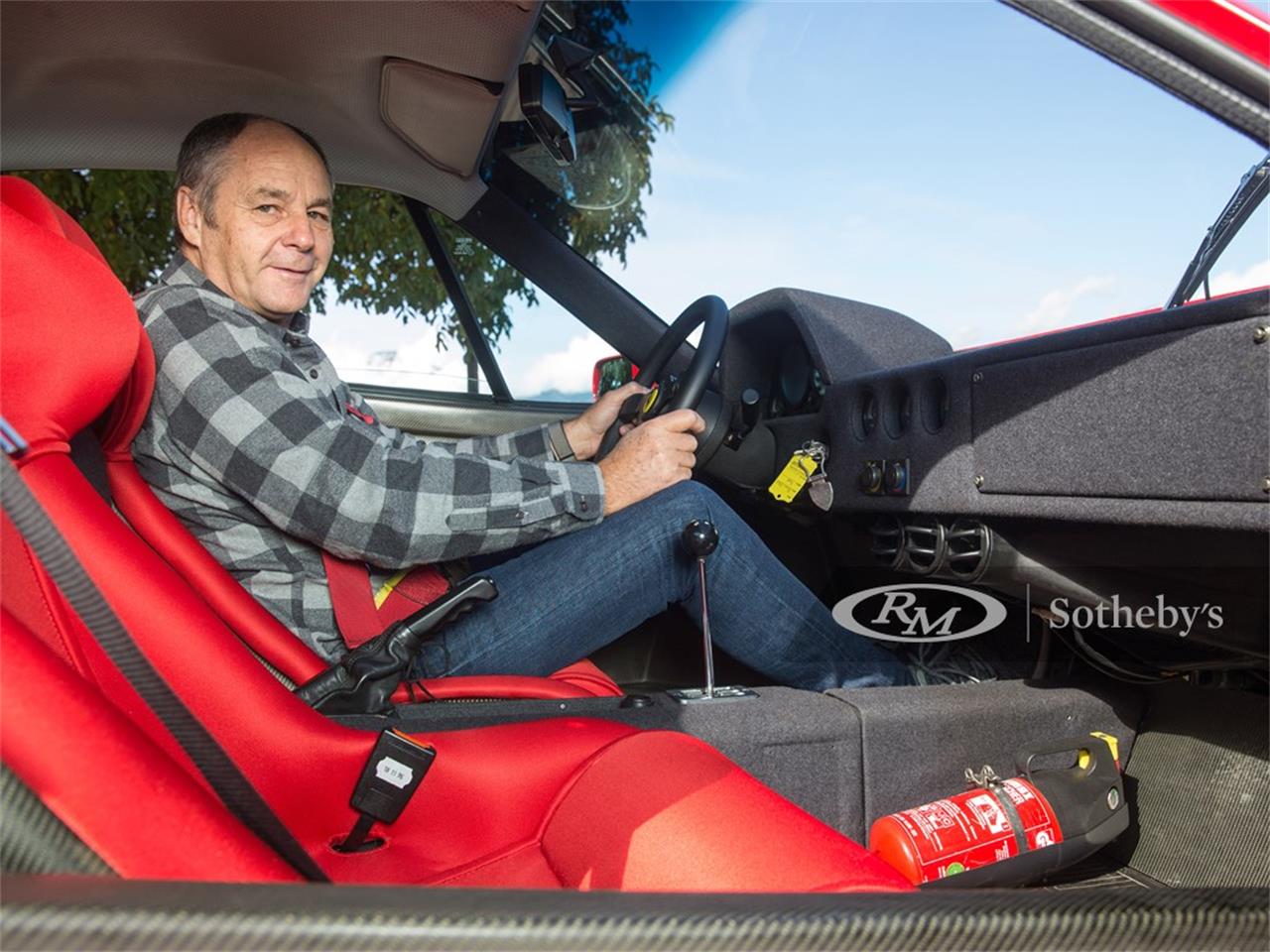 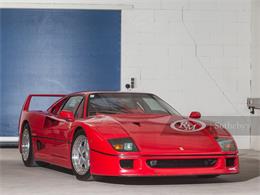 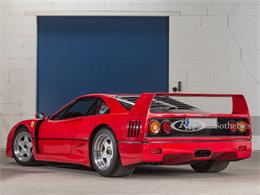 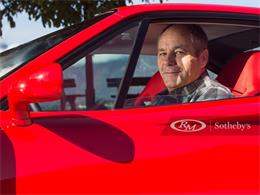 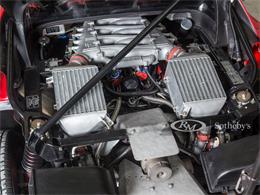 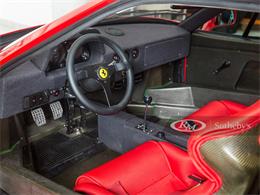 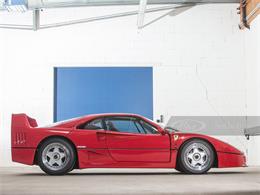 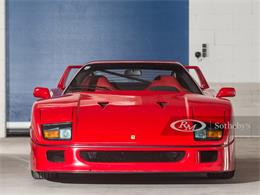 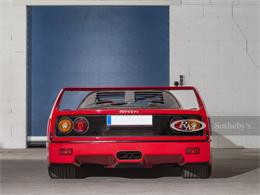 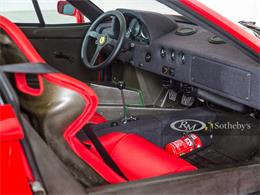 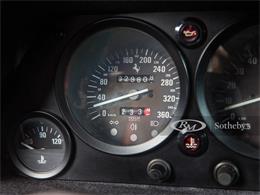 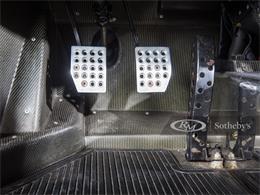 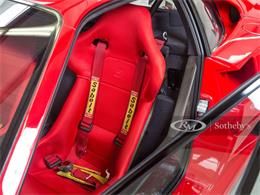 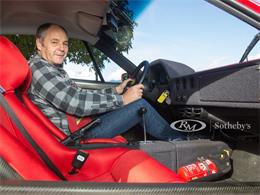 In any discussion of automotive icons, the Ferrari F40 is surely amongst the first cars to be mentioned. Celebrating the company's 40th birthday, the F40 was the pinnacle of what Ferrari could create as a company. At the cutting edge of performance, it handily put Lamborghini's Countach and Porsche's 959 in its rearview mirror, claiming title to the fastest production car in the supercar-crazed world of the 1980s. Unfortunately, with Enzo's passing, the F40 was also the last car to receive the blessing of il Commendatore, bringing about the end of an era for one of the most storied marques in automotive history.

While the 959 achieved its top speed through pioneering several innovative technologies, the F40's relentless pursuit of performance was achieved through the tried-and-true method of less weight and more power. Ferrari made prolific use of fiberglass and carbon Kevlar for both its chassis and bodywork, with the F40 tipping the scales at a svelte 2,400 pounds. Its imposing shape was designed with aerodynamics in mind, providing for excellent high-speed stability and plenty of airflow to the engine to prevent overheating. The interior made no compromises in the pursuit of performance, as well. Fitted with lightweight bucket seats and devoid of creature comforts, the F40 was equipped with either roll-up or fixed windows, no carpeting, and featured simple door pulls instead of traditional handles.

Equally as impressive as its approach to weight savings was the F40s powerplant. The twin-turbocharged 2.9-litre V-8 was based on that found in the 288 GTO, but featured bigger bores and a shorter stroke. Producing 478 bhp, the F40 could rocket to 60 mph in just 3.8 seconds, leading to a quarter mile of 11.8 seconds. Should the driver have the courage to keep accelerating, the F40 would easily pass the 959 at 197 mph, ultimately reaching 201.4 mph. This was a monumental milestone as it was the first production car to break the 200-mph barrier. Ferrari had originally planned to build just 400 F40s, but demand far outweighed the intended production run, pushing the total number built to 1,311.

This example was completed in Maranello on March 27, 1990 and delivered new to Ferrari agent Lightspeed S.r.l of La Spezia, Italy. Shortly thereafter it was sold to a Mr. Lebee, and exported to his native Singapore via Ferrari's sole authorized dealer on the island, Hong Seh Motors Pte. This chassis would remain in Singapore, sparingly driven, until February of 1993 when it was acquired by a second owner and moved to Japan.

Accompanying testimony from marque expert Marcel Massini cites this chassis on-display at the much acclaimed Retromobile event in Paris, France in 2015 and 2017. During the interceding year, this chassis was sold to its third owner and imported to Germany from its long time residence in Japan.

Through 2017, the previous owner commissioned Official Ferrari Dealer Penske Sportwagen of Hamburg, Germany to comprehensively service this F40 - insisting that anything requiring attention should be attended to. After dropping out the engine, Penske's expert staff quick set to work upon this chassis, resetting it to the highest mechanical standards. Accompanying invoices show that a major belt service and replacement or refurbishment of various powertrain accessories was followed by the fitting of new Brembo rotors and calipers. Originally specified as an adjustable-suspension model, Penske converted this chassis to run the earlier-style non-adjustable suspension setup using all-new and correct components. The presently mounted set of 17-inch, lightweight alloy 'Ferrari by Speedline' wheels and Pirelli P Zero tires were acquired and fitted at this time. In all, the previous owner incurred nearly €80,000 with this dealer to refresh the chassis and bring it up to a mechanical state befitting its presentable and superb cosmetic condition.

This F40 was acquired by the former Ferrari Formula 1 driver Gerhard Berger in May of 2019. Berger, who competed in 210 Formula 1 races and won 10 GP's between 1984 and 1997, remains one of the longest tenured drivers in the history of the series. Since its inaugural season of 1950, just 13 individuals have taken part in more Formula 1 races. Along with Clay Regazzoni, he is also notably the only other pilot to have driven for Scuderia Ferrari twice; Berger started for the "Italian National Racing Team" in 1987-89 and then returned to their roster for 1993 - 95, achieving a pair of World Championship podiums for Ferrari in 1988 (3rd) and 1994 (3rd), respectively. He famously joined the McLaren Formula 1 Team for the 1990 through 1992 seasons as the teammate of Ayrton Senna-forming a potent and threatening combination which secured a pair of coveted constructor's titles in 1991 and 1992. Though he retired from Formula 1 after the 1997 season, Berger has always remained very active in the motorsports community-he currently serves as President of the ITR (Internationale Tourenwagen Rennen e.V.), the organization which runs the German touring car championship. Simply put-there are few people in the world who understand what it means to enjoy a Ferrari, at-the-limit, better than the esteemed owner of this well presented chassis.

Berger registered this F40 in his native Austria shortly thereafter, and this highly original car was successfully submitted for Classiche Certification under his ownership in December of 2019. The accompanying 'red book' attests to the continued presence of all pertinent original equipment and factory finishes. As with all examples preserved to the highest degree, this chassis' original Rosso Corsa paintwork displays a clearly evident 'weave'-a phenomenon attributed to the texture of model's carbon fiber bodywork and very thin layer of factory-provided paint. The sole modification noted (sans the suspension conversion), is limited to the fitment of an uncatalyzed and unsilenced 'Le Mans Quicksilver' titanium sports exhaust system.

This is a unique chance to acquire a fully serviced, Ferrari Classiche certified F40 directly from the provenience of one of Ferrari's Formula 1 icons - Gerhard Berger.
To view this car and others currently consigned to this auction, please visit the RM website at rmsothebys.com/en/auctions/lf20.