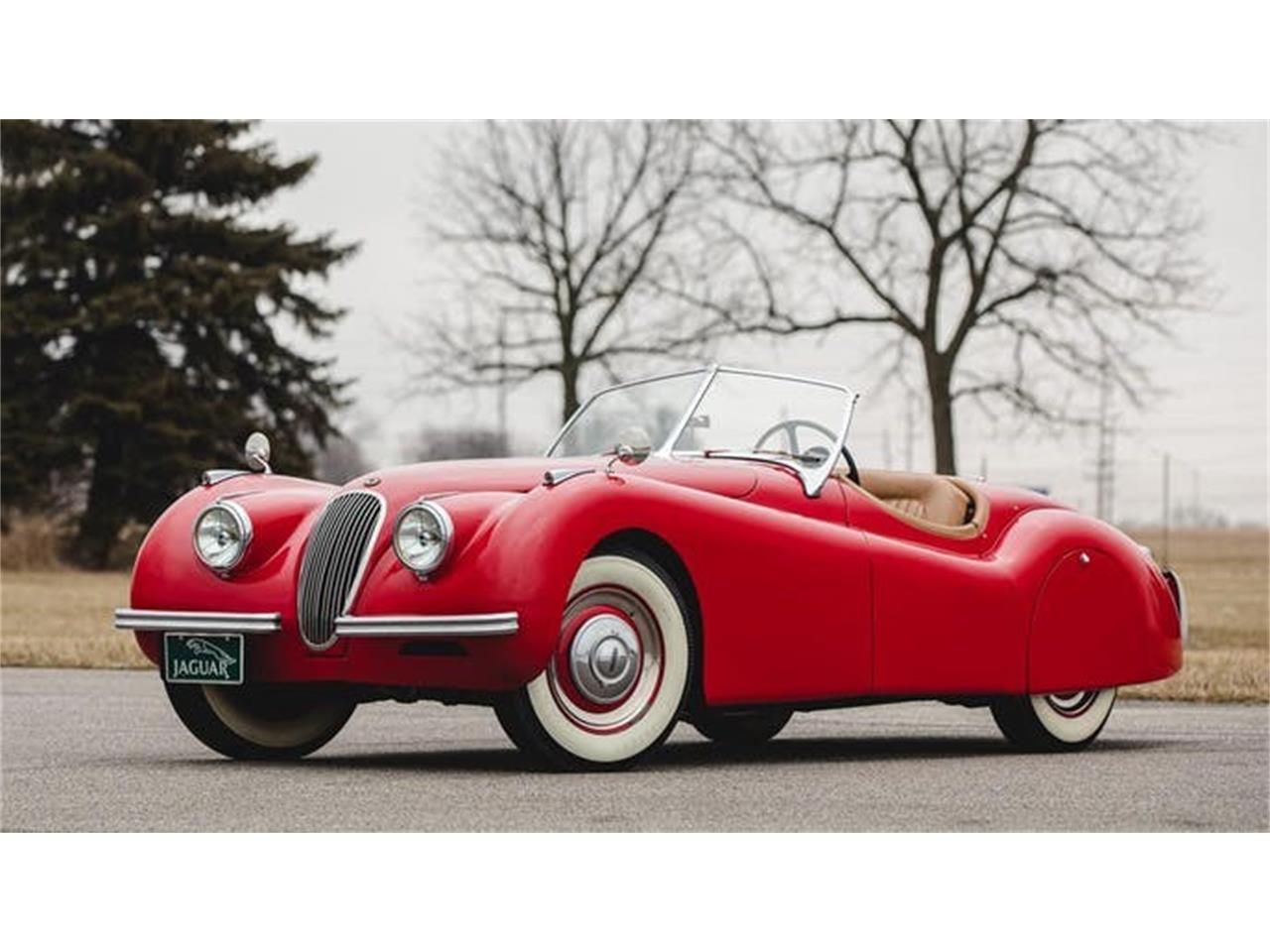 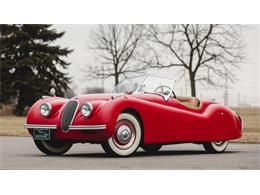 The XK120 was launched in open two-seater or (US) roadster form at the 1948 London Motor Show as a testbed and show car for the new Jaguar XK engine designed by Jaguar Chief Engineer William Heynes .

The XK120 was ultimately available in three versions or body styles, first as an open 2-seater described in the US market as a roadster (OTS) then as a fixed head coupé (FHC) from 1951 and finally as a drophead coupé (DHC) from 1953, all two-seaters and available with Left (LHD) or Right Hand Drive (RHD). However, certain Special Equipment roadster and fixed head coupe cars were produced between 1948 and 1949 denoted by an 'S' preceding the chassis number. These Special Equipment cars were sold as an early production build for enthusiasts.[citation needed]

On 30 May 1949, on the empty Ostend-Jabbeke motorway in Belgium, a prototype XK120 timed by the officials of the Royal Automobile Club of Belgium achieved an average of runs in opposing directions of 132.6 mph with the windscreen replaced by just one small aero screen and a catalogued alternative top gear ratio,[note 1] and 135 mph with a passenger-side tonneau cover in place.[7] In 1950 and 1951, at Autodrome de Linas-Montlhéry, a banked oval track in France, open XK120s averaged over 100 mph for 24 hours and over 130 mph for an hour.

The first 242 production XK120s, hand-built with aluminium bodies on ash framing mounted on a steel chassis mostly copied from the Jaguar Mark V chassis using many of the same parts, were constructed between late 1948 and early 1950. To meet demand, and beginning with the 1950 model year, all subsequent XK120s were mass-produced with pressed-steel bodies. Aluminium doors, bonnet, and boot lid were retained. The DHC and FHC versions, more luxuriously appointed than the constantly exposed open cars, had wind-up windows and wood veneers on the dashboard and interior door caps.

The open two-seater's lightweight canvas top and detachable sidescreens stowed out of sight behind the seats. Its doors had no external handles. There was an interior pull-cord accessed through a flap in the sidescreens when the weather equipment was in place. The windscreen could be removed for aeroscreens to be fitted.

The subject vehicle is a restored 1950 Jaguar XK120. This example is a steel bodied version. Engine is a 3.4l I-6 2x SU; 160hp with a 4 speed Moss transmission. Miles show 845 miles since restoration. Overall condition is rated at # 2+. Professional appraisal available upon request. Vehicle presents as an older restoration, completed to very high standards. The age of the restoration work is not known, but was completed before 2007.

Engine is a 3.4l Jaguar inline six with dual and correct SU H6 “tall neck” carburetors. The engine number stamped at the front of the engine (W18608) matches the engine number identified on the vehicle data plate affixed to the bulkhead. Data plate should be affixed with rivets, but this example uses screws. Engine area appears clean, detailed, and lightly used, approaching a concours level presentation.

The polished aluminum rocker covers show nicely, with no notable cosmetic defects observed. The black finish on the exhaust manifold shows in excellent condition with no cracking, flaking or other damage to the paint observed. An electronic thermostatically controlled cooling fan has been added to the front of the radiator for additional cooling. Radiator is a correct Marston Excelsior unit with metal tag. All the wiring in the engine area is a period correct cloth lined material, with the exception of the wiring for the added electronic cooling fan, which is in modern vinyl wires. Correct nickel plated Lucas generator. Correct Lucas 40449 distributor.

Correct unpainted fasteners on the underside of the hood and in the engine area. Transmission is a correct Moss four-speed gearbox. Gearbox number was found stamped at the back corner of the transmission on the driver side. The numbers stamped on the gearbox match the gearbox number indicated on the data plate.

The interior has been completely restored. Inner door panels, chrome hardware, seats, carpeting, and cockpit trim have all been replaced. Convertible top shows in excellent condition with no notable wear or stains observed. The convertible top frame also shows in very good condition. Correct gauges throughout. The instrument panel in the car is an early version, (thru chassis 672949), correct for the car.

A correct Jaguar “Record Breaking Replica Plate” was found affixed in his proper location on the passenger side of the dashboard. Chrome switchgear and hardware in the interior shows in excellent condition with no notable tarnishing or patina observed. Aftermarket seat belts have been added for both seats. There are no side curtains observed near the vehicle, unaware if the side cu Exterior finish shows in excellent overall condition with no notable oxidation, sun fade, or other issues observed. The finish has been polished to a high gloss with excellent overall reflective quality. Upon close examination, a few subtle imperfections in the finish are able to be observed. Vehicle was obviously completely stripped of all exterior trim and seals, as no inappropriate masking lines or overspray were observed on any exterior trim pieces. Glass windshields show in excellent condition with no chips, cracks or damage observed. No manufacturer markings on either pieces of glass. Exterior chrome all shows in very good overall condition with no dents or notable tarnishing or patina observed. Panel gaps and alignment show very nicely, with no notable irregularities observed. Shut action of both doors is smooth, with minimal effort required.

Chassis is clean and restored to a high standard when the restoration was completed. Tires are Firestone bias-ply 6.00-16 mounted on steel wheels with covers and trim rings, all of which show in excellent condition.

Stainless steel exhaust system. Chassis shows minimal signs of use, and is generally clean and presentable.

Owner of the dealership passed away and we are selling his collection. call 1-800-762-8824 and ask for Dirk, Mansfield Motor Group, Mansfield Ohio  MMGauto.com Additional pictures to be posted as soon as able. 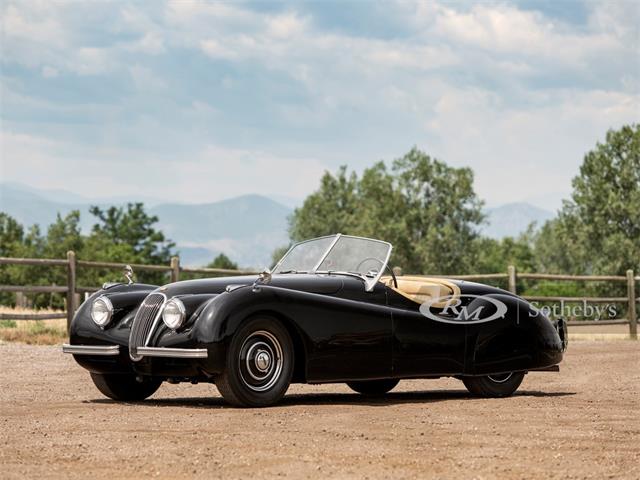