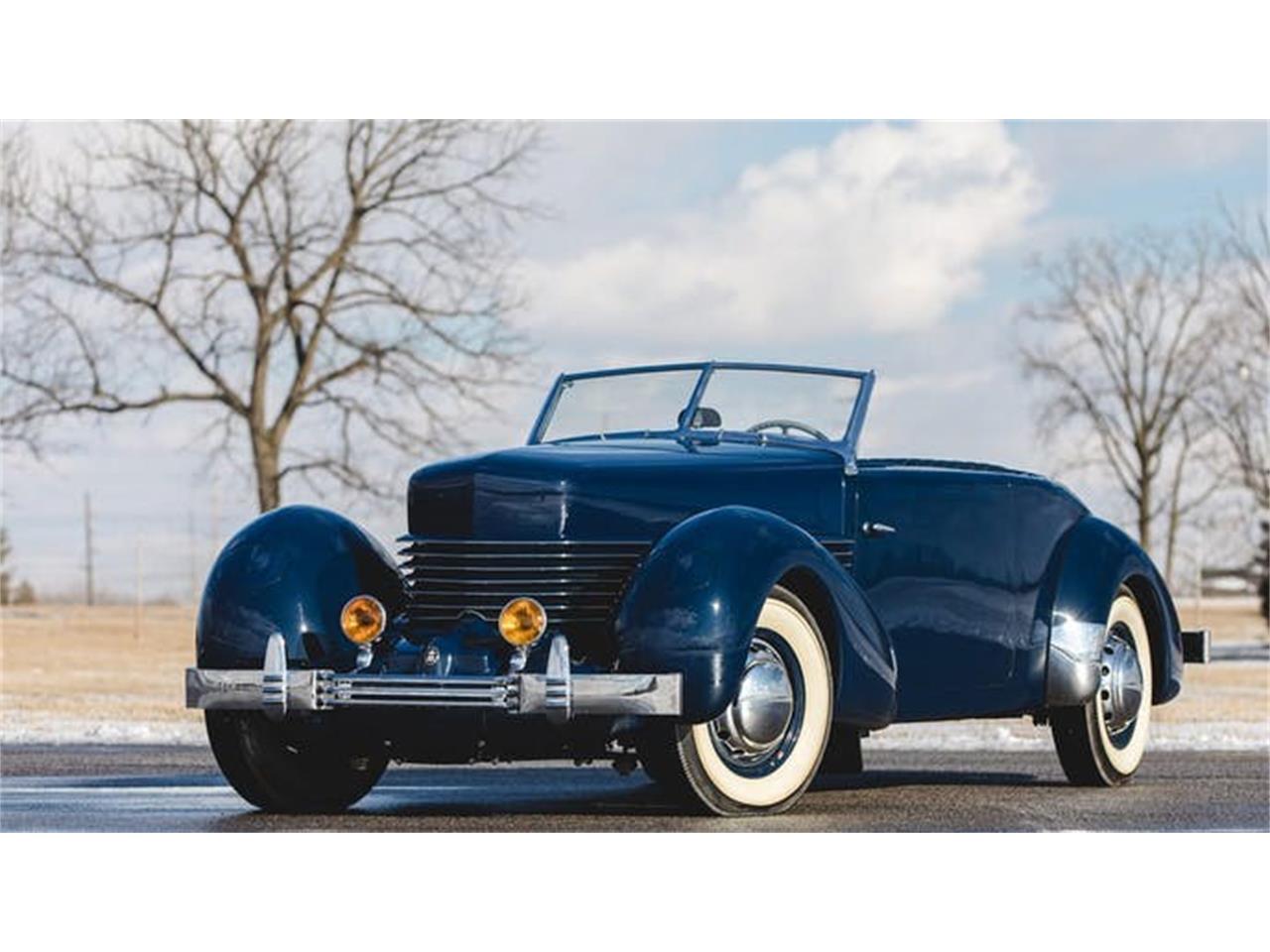 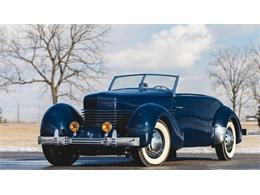 Cord was the brand name of an American luxury automobile company from Connersville, Indiana, manufactured by the Auburn Automobile Company from 1929 to 1932 and again in 1936 and 1937.

The Cord Corporation was founded and run by E. L. Cord as a holding company for his many transportation interests, including Auburn. Cord was noted for its innovative technology and streamlined designs.

Cord innovations include front-wheel drive on the L-29 and hidden headlamps on the 810 and 812.

Though DeSoto used them in 1942, hidden headlamps did not reappear as a luxury feature until the 1960s,

This was the first American front-wheel drive car to be offered to the public,[1] beating the Ruxton automobile by several months, in 1929.[2] The brainchild of former Miller engineer Cornelius Van Ranst, its drive system borrowed from the Indianapolis 500-dominating racers, using the same de Dion layout and inboard brakes.[2] Built in Auburn, Indiana, the Cord was the first front-wheel-drive car to use constant-velocity joints.[3] While commonly used today in all front-wheel-drive vehicles, their first use was on the 1929 Cord. The lack of rear drivetrain components and straight frame (without rear kick-up to clear up the rear axle) allowed it to be much lower in height than competing cars whose average height was about six feet or almost two meters. Both stock cars and special bodies built on the Cord chassis by American and European coachbuilders won prizes in contests worldwide. The L-29 came with full instrumentation, including a temperature gauge, oil pressure gauge, and speedometer on the left with a gas gauge, oil level gauge, and Ammeter on the right of the steering wheel.[1]

It was powered by Auburn's 4,934 cc (301 cu in) 125 hp (93 kW) L-head 120, with the crankshaft pushed out through the front of the block and the flywheel mounted there, driving a three-speed transmission. Gearing in both transmission and front axle was inadequate, and the 4,700 lb (2,100 kg) car was underpowered, limited to a trifle over 80 mph (130 km/h), inadequate even at the time, and readily exceeded by the less expensive Auburn.[2] Still, the styling was lovely, and despite the 137.5 in (3,490 mm) wheelbase and steering demanding fully four turns lock-to-lock, handling was reportedly superb.[2] Priced around US$3,000, it was competitive with Cadillac, Marmon, Lincoln, Packard, Franklin, and Stutz; the 1930 Chrysler copied several styling elements.[2] It could not outrun the Great Depression, and by 1932, it was discontinued, with just 4,400 sold.[2] Wheelbase was 137.5" and the height of the sedan was 61".[4][1]

The Model 810/812 are probably the best-known of the company's products. Styled by Gordon M. Buehrig, they featured front-wheel drive and independent front suspension; the front drive enabled the 810 to be so low, running boards were unnecessary.[2] Powered by a 4,739 cc (289 cu in) Lycoming V8 of the same 125 horsepower (93 kilowatts) as the L-29, the 810 had a four-speed electrically-selected semi-automatic transmission, among other innovative features.[2]

The car caused a sensation at the New York Auto Show in November 1935. Orders were taken at the show with Cord promising Christmas delivery, expecting production of 1,000 per month. Production delays pushed the expected delivery date to February 1936. This proved optimistic; the first production vehicles were not delivered until April.[5] In all, Cord managed to sell only 1,174 of the new 810 in its first model year.[2] The car is well known for its flat front nose with a louvered grille design that resembled a coffin, earning the nickname of "Coffin Nose".

The subject vehicle is a 1937 Cord 812 Phaeton. One of 410 non-supercharged Phaetons produced for 1937. 289ci flat-head V8 125hp. Semi-automatic Transmission Serial # 8121155H. Shows 105 miles since restoration. Overall condition rated 1- / 2+. Professional appraisal available upon request. The vehicle has been comprehensively restored, although the age of the restoration is not known. The vehicle was most recently acquired advertised as retaining its original engine. Indeed, the engine number stamping does match the engine number identified on the tag, however it should be noted that the body tag is a newer reproduction piece. The engine area has been comprehensively restored and shows in clean and very presentable condition. Carburetor is a correct and specific Cord EE15. Air filter chamber was not observed with the vehicle during appraisal. All wiring in the engine area is period correct cloth lined, and shows in excellent condition with no damaged or disconnected wiring. An engine number stamping observed in the correct location matches the number identified on the body tag. A few areas of touch up paint was observed on the passenger side cylinder head. Correct reproduction Autolite voltage regulator. Period clamps. Hoses show in good condition. Period AutoLite generator. Transmission stamped R4320, with unit number T2248. Bulkhead paint shows in excellent condition. Finish on the exhaust manifolds shows in excellent condition with no chips or corrosion observed. Seats show in good overall condition with no tears or damage. Carpeting shows very nicely, Both cranks for the retractable headlights operate smoothly and easily. Both front windows roll up and down smoothly. Dashboard fascia shows very nicely. Steering wheel shows in excellent condition with no cracks or damage observed. Trim in the interior shows very nicely, with no notable damage observed. Both lower sill plates show mild tarnishing. A hidden battery disconnect switch has been mounted under the front seat. The exterior finish shows in excellent overall condition, with paint that is generally very smooth and

Glossy with excellent overall reflective quality. Panel gaps and alignment all show very nicely, with no notable irregularities in fitment observed. Both doors open and close very smoothly, with minimal effort required. Glass shows in excellent condition, with no damage observed. All exterior chrome present, with no major damage observed.

The chassis appears to have been completely restored when the vehicle was restored. The chassis shows very nicely, with minimal sign of age and use observed. Bolts and fasteners generally show in nearly new condition, with no notable surface corrosion observed. Tires are BF Goodrich Silvertown bias-ply, size 6.50-16. Matching full size spare tire properly mounted in the trunk with all changing tools. Carpet kit in the trunk area shows in excellent condition with no damage. All wiring in the trunk area shows in good condition. Additional pictures will be posted as available. 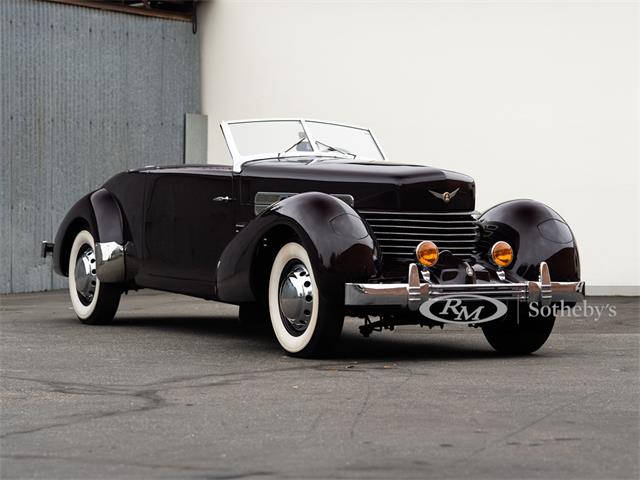 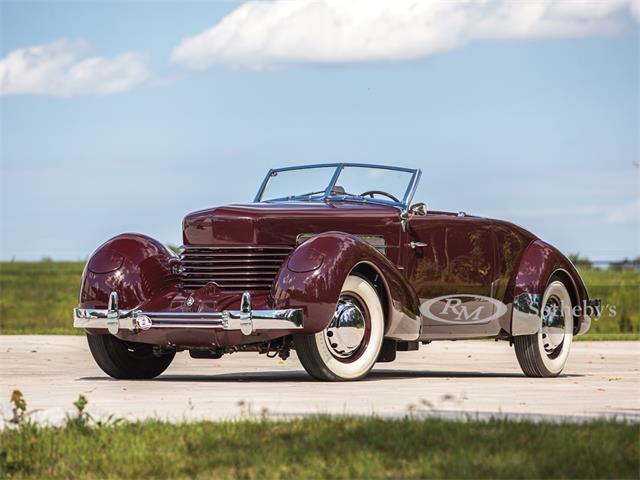