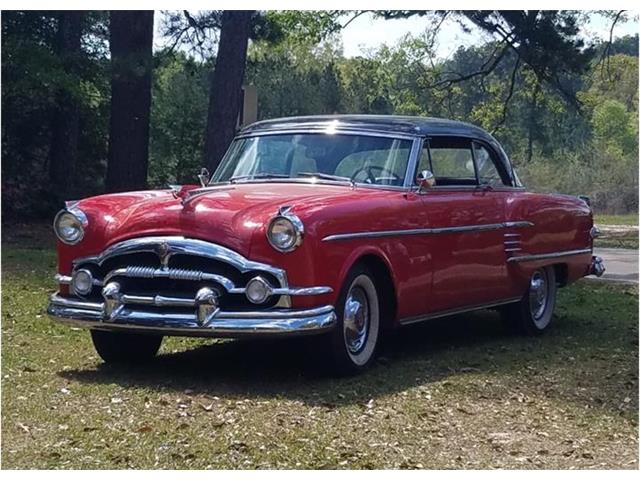 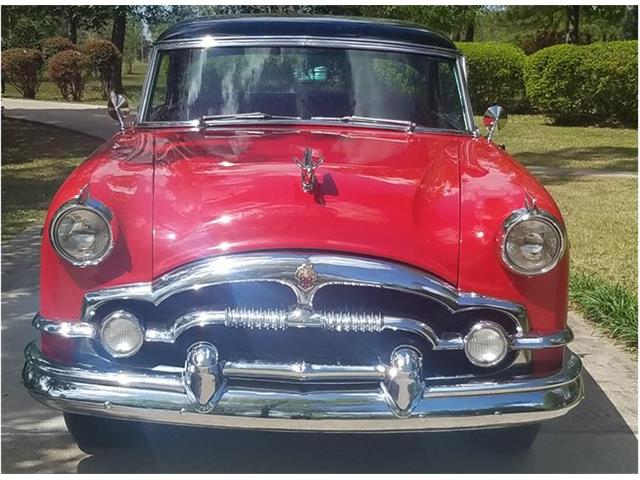 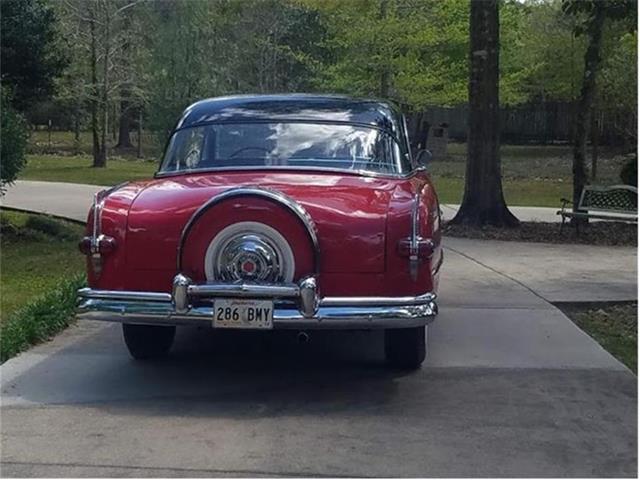 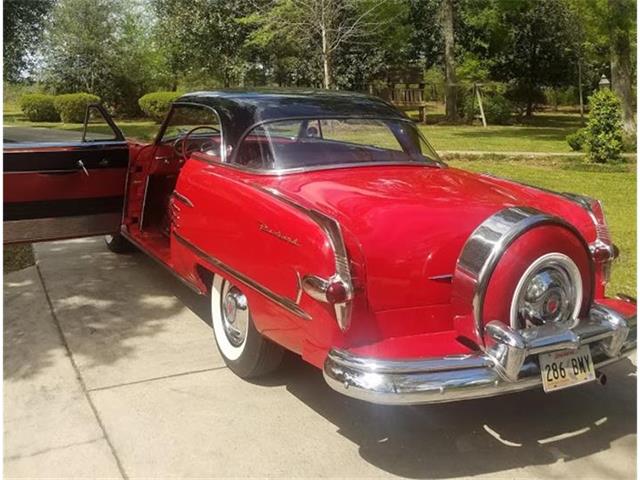 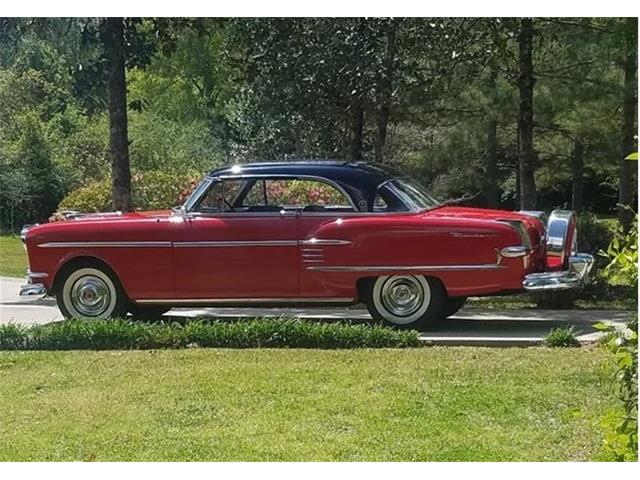 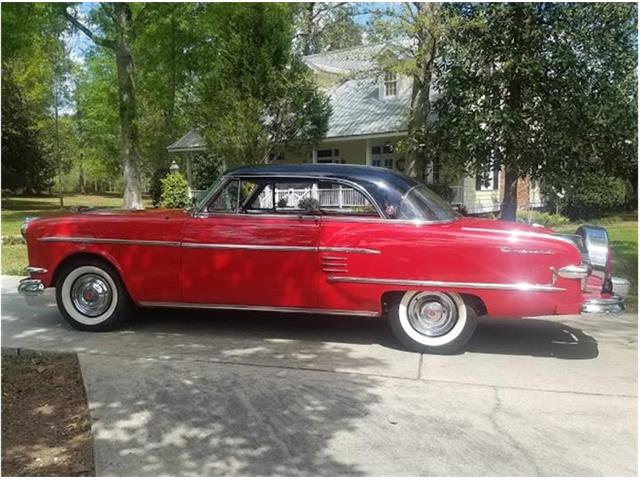 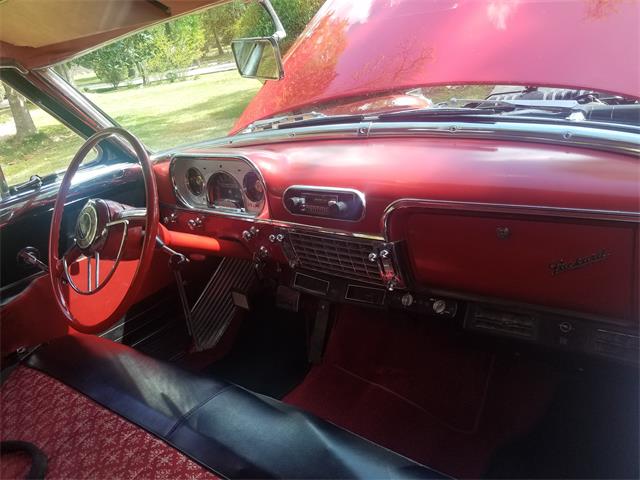 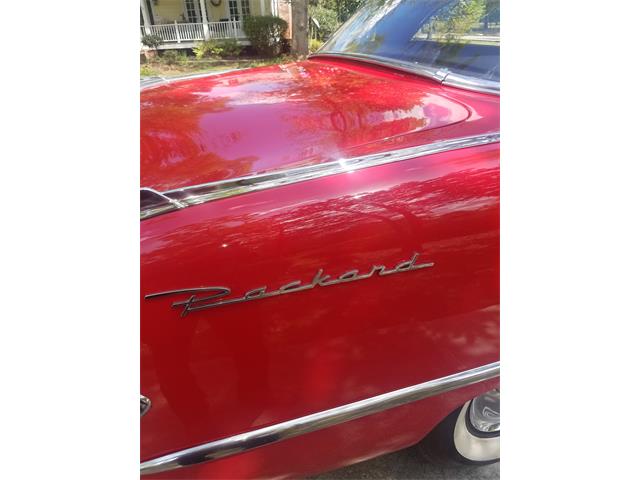 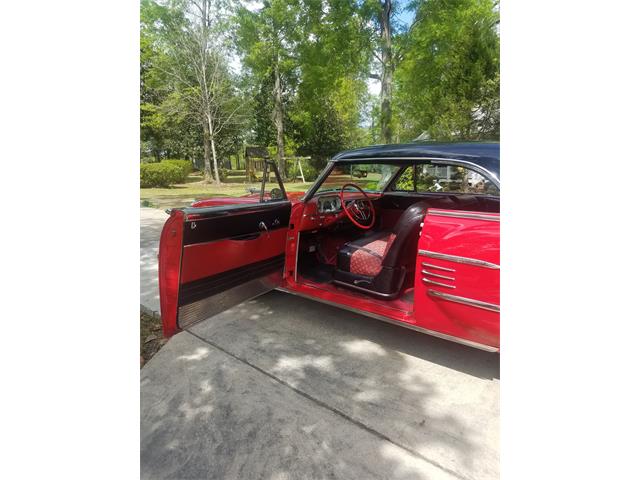 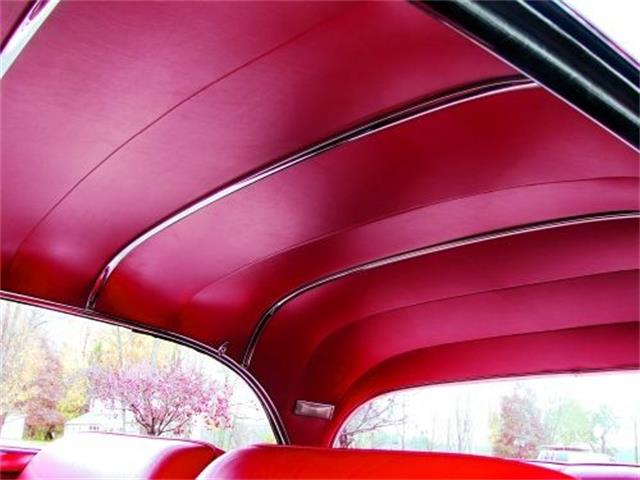 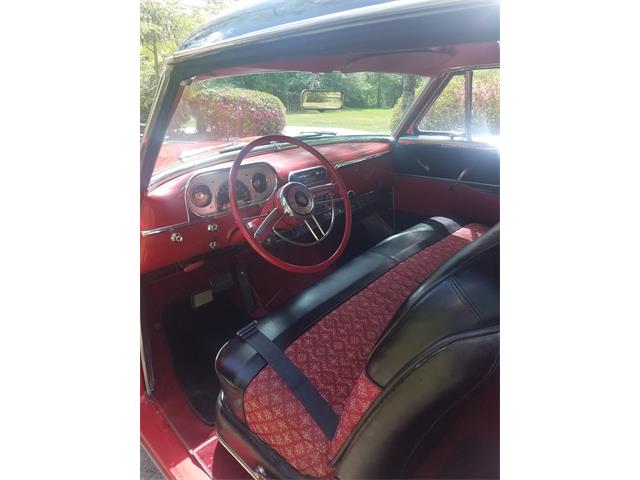 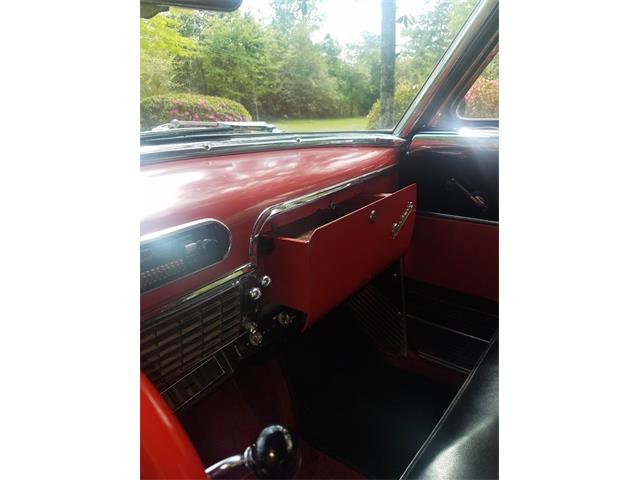 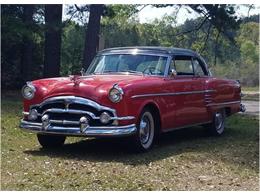 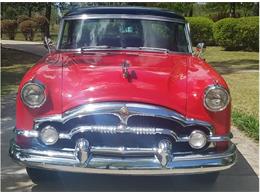 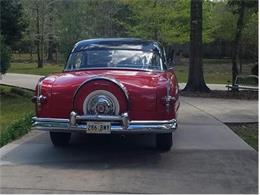 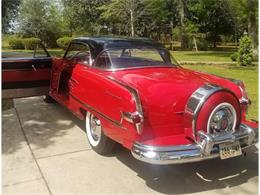 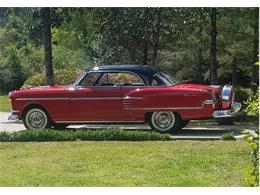 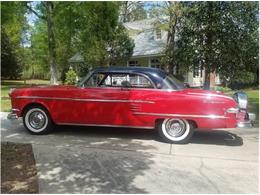 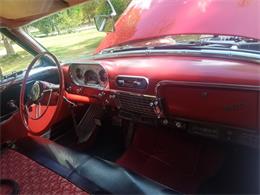 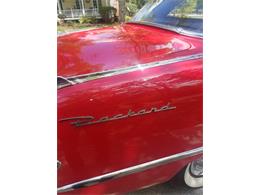 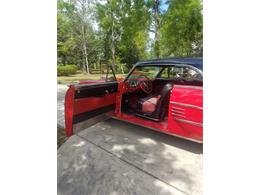 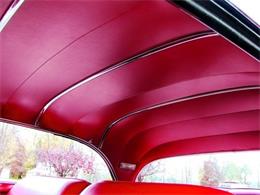 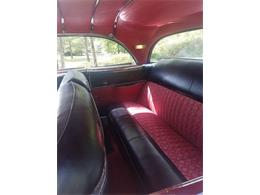 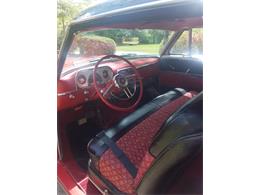 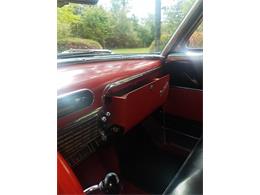 Ahead of its time and behind the times.

Ahead in creature comforts:

1.  This car was built with factory a/c, separate driver and passenger heater controls (way before modern cars caught onto this) the rare optional rear passenger heater with blower, power steering and brakes, power antenna for the signal-seek radio, speakers front and rear, 2nd and 3rd gears are synchromesh in this rare and most desirable manual shift transmission, plus the special option, an added Borg-Warner T-11 Overdrive which works like a charm in this car, giving extra gas mileage when engaged, and acts like a passing gear when floored, kicking down into 3rd gear for faster acceleration to pass another car. This car cruises with ease at modern highway speeds!

The brakes are reputed to be the very BEST in America in 1954, and are great even by today's disc brakes. These Packard brakes have huge Thirteen inch drums and stop straight ahead, without darting left or right, stopping the car on a dime! These brakes are a full inch larger than the next year's fastest street cars, the Chrysler 300s, which had only 12 inch brakes. [I now own two 300 letter cars, and have owned 3 others.]

Succinctly stated: Packards were among the best-engineered, best-built and most-luxurious cars of all American cars. They were built to last, and they accomplished their goals without compromise. Their sales motto touted their known customer satisfaction: "Ask a man who owns one." They  never considered "built-in obsolescence" to be worthy of a Packard.

The venerable Straight 8 was highly respected among car lovers who revered the true classics: Pierce Arrow, Cord, Duesenberg, Auburn and others. The Packard engine was always a sure starter, as dependable and smooth as any motor made, with torque like a tractor, at 330 ft. lbs, plus the 3rd greatest horse power in American cars of 1954: 212 h.p.

Rarity in build production: The Pacific came only as a 2 door hardtop or convertible, and for ONE YEAR only! Packard made only 1189 Pacifics, and all came with the largest displacement of any straight eight ever placed in a Packard: 359 cubic inches, fed by the very dependable WCFB four barrel carb with a newly developed aluminum head installed only in these "Senior" Packards in 1954. This special head was designed for high performance and to prevent detonation and overheating. It all worked very well, and this light weight head saved many pounds in weight.   This particular car had a 327 cast iron head on it when the present owner acquired it. It ran well, but was not "original". So, the present owner searched and finally found a pristine Aluminum 359 head in like-new condition within the last 2 years (at a premium price, like the totally re-manufactured WCFB carb now installed with the new head). The original Delco Distributor is still in the car and runs great, as are most of the essential parts which are mounted. The electric power seat was added by the original owner, as was the Vintage A/C compressor when the original compressor was no longer rebuildable. The addition of a very dependable 12 volt conversion system included the 12 volt alternator for modern battery demands is a very good improvement.

This car has recently been stripped to bare metal and primed in Acrylic and repainted in base-coat, clear-coat in a correct and original Packard color pattern of black top and Chariot Red lower.  This color scheme is authentic to the Pacifics and is Much prettier than the bland Sahara tan/Chariot red scheme it was originally painted. In a Packard national meet, this revised color scheme, being correct for the Pacifics, costs no deduction in points, but picks up desirability for the owner and votes among Peoples' Choice competitions. The interior is mostly original, except the seat covers, which are correct NOS design as 1 of 5 patterns made.

J.D.Powers and N.A.D.A. Classic car Guide values this car as high as $35,300 with factory a/c (see the photo of hoses in the trunk to verify it had a/c,)  and now has the modern Vintage air unit which blows very cold with 12 volts, plus the standard transmission with working overdrive. These are the only two options given value by J.D. Powers and N.A.D.A., though the Continental kit  adds value and charm for this classic vehicle.

The Continental kit appears like other kits I have seen on other Packards of this vintage, and the kit was obviously built to fit this car, even though installed later on the car around circa 1989 when the car was refurbished, including engine rebuild by the owners (husband and wife antique dealers) in San Antonio. The original green bumper jack comes with the car (neat cranking arm to raise and lower the car), though I recommend the use of a bottle hydraulic  jack for jacking the sturdy steel frame before replacing any flat. Two spares are included: one in the C. kit and one (main spare) in the trunk in its deep well compartment. There is almost enough room for a Volkwagen in the trunk of this car, with room for luggage and whatever you want to load there.

The tires on it are practically new, with maybe 200 miles on them, installed in 2017, but they are after all, bias ply tires which are not optimum for the car. They are soft and safe, but they tend to pick up the ruts or grooves in the roadways, unlike the better radial tires which make the car steer much better. That would be my recommendation for the new owner, wsw radials such as sold by Coker tire and others. I replaced most, but not quite all of the exterior window rubber with new replacements, but the car is highly rebuilt and serviceable for driving or trailering to shows and events as is, with no rain leaks.

Durability systemic in design and construction! After sitting in an airplane hangar in its dry-climate home town of San Antonio in West Texas, a new oem gas tank came with this car, but had not been installed.  Thus my excellent mechanics opted to utilize a 5 gallon jug of fresh gasoline hooked directly to the fuel pump and the carburetor to crank the olde Packard for the first time in a quarter century.  It took them all of a half hour to have her running on her own power, blowing out soot from years of sitting without freshening the oil, gas and other fluids until the day they cranked her in 2016.  How's that for durability? I was amazed, though my late partner in picking it up in Texas was a man who still owned a dozen older Packards. [Thank you, and RIP, Doy]. This motor was never stuck, and turned freely when first tested. Now that its correct gas tank has been installed properly and all other parts in the ignition and drive train have been replaced and/or cleaned, all fluids replaced with the best available, and all systems are go. It cranks every time, has new plugs, plug wires, coil, points, condenser, dist. cap and modern starter ($$$$).

The seller has owned this car since 2016, and have never had to add oil to the engine. This engine does not smoke or use oil,has 91,000+original miles on the odometer. She accelerates best in the 40-70 mph range, where it was designed to cruise. She rides like a cruiser should!

This car came with a black front awning above the front windshield, but this was long-gone before I found her in San Antone. However awnings are still available from Packard suppliers and private owners in the Packard club. Mechanically sound, this car is ready to drive as often and as far as you wish. The electric wipers do the job, and the dealer-installed Marvel Mystery Oil cannister is prominently mounted (but uninstalled) on the passenger side of the firewall, apparently ready to be fully activated as designed with the ORIGINAL factory instructions included in the sale. With proper adjustment, the Mystery oil is designed for slow release keyed with the next oil change, thus helping the car to run without undue wear.  What are your questions? I have receipts and books, manuals, newspaper articles and old pics of this car.