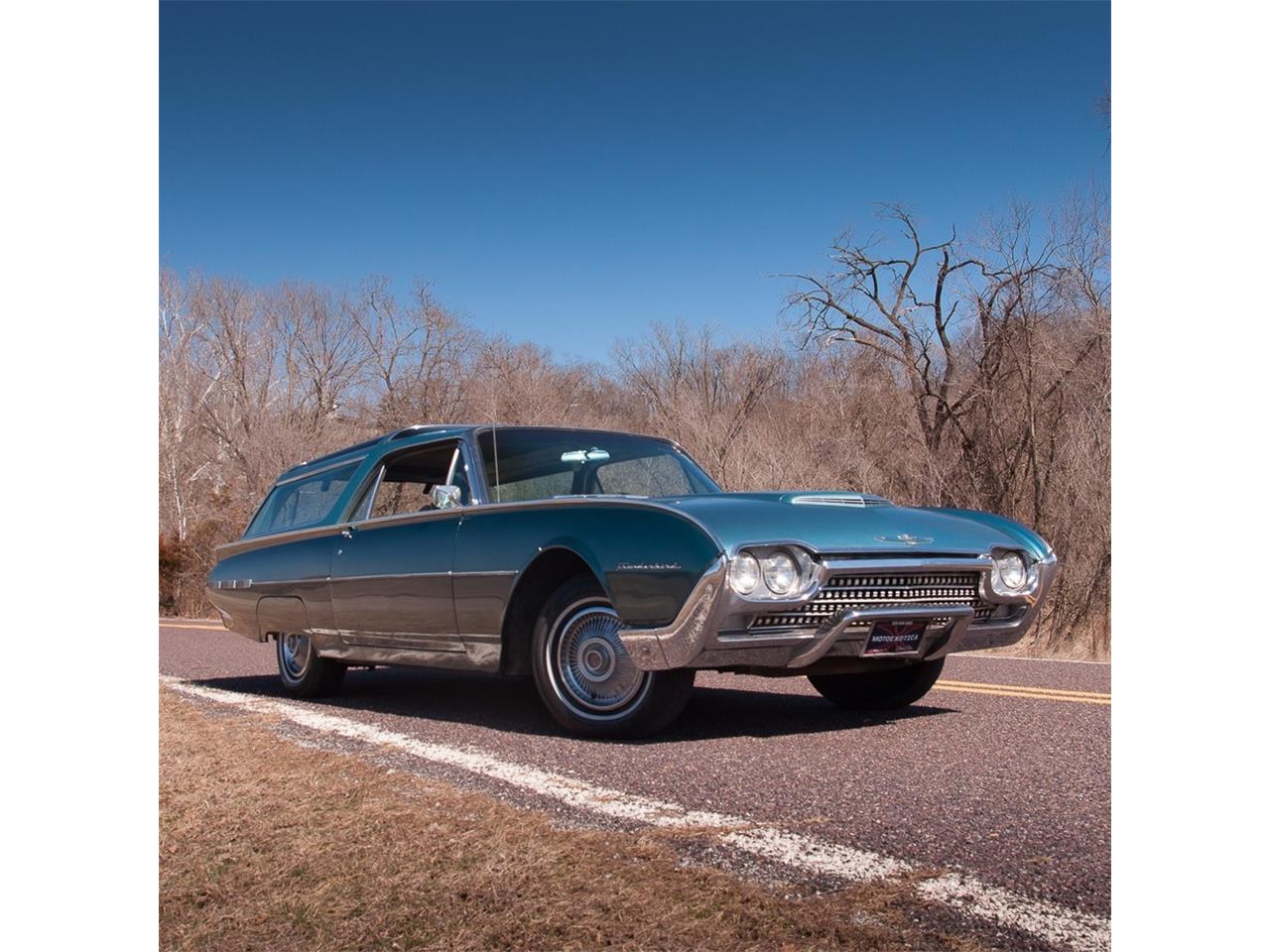 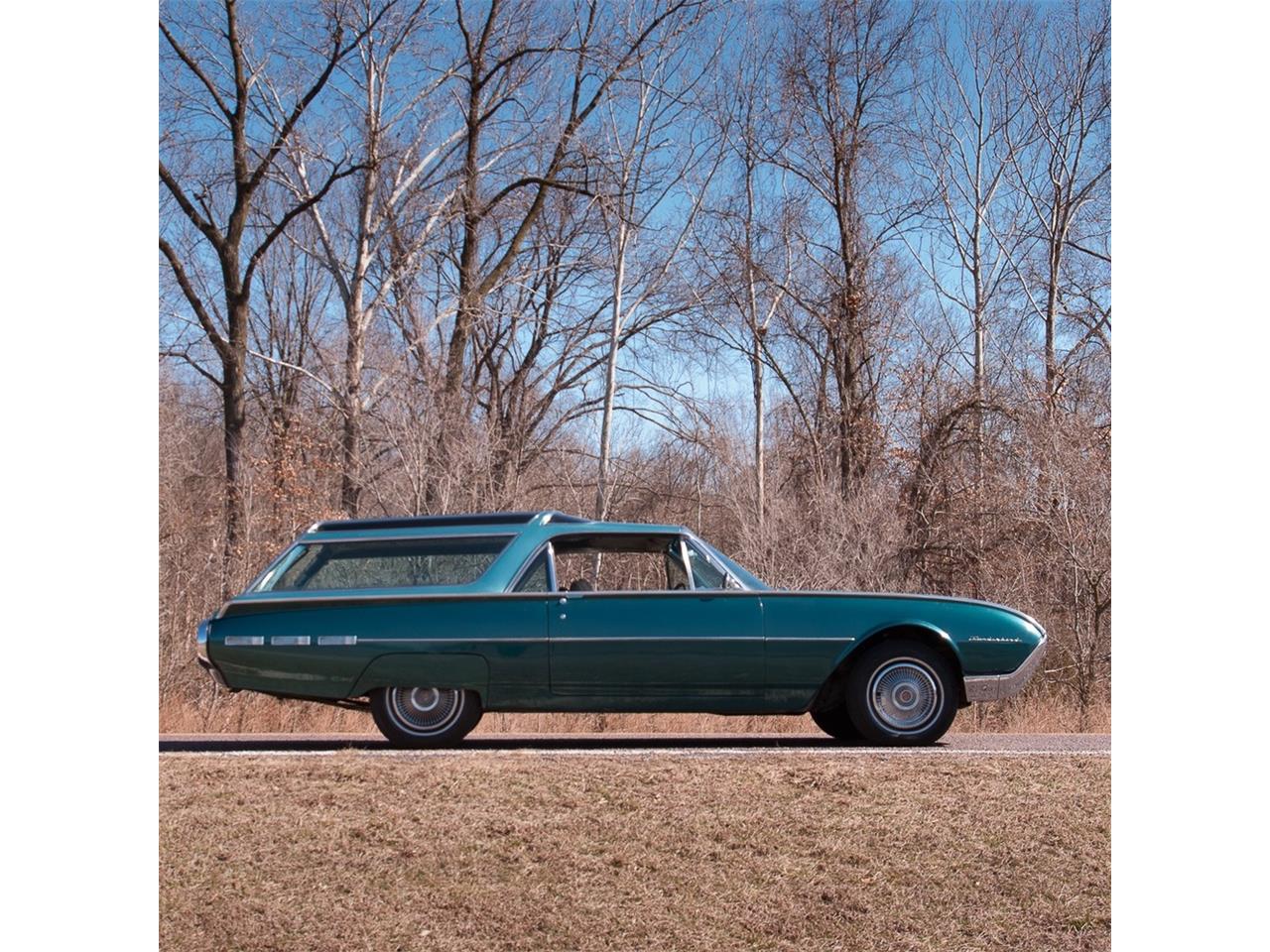 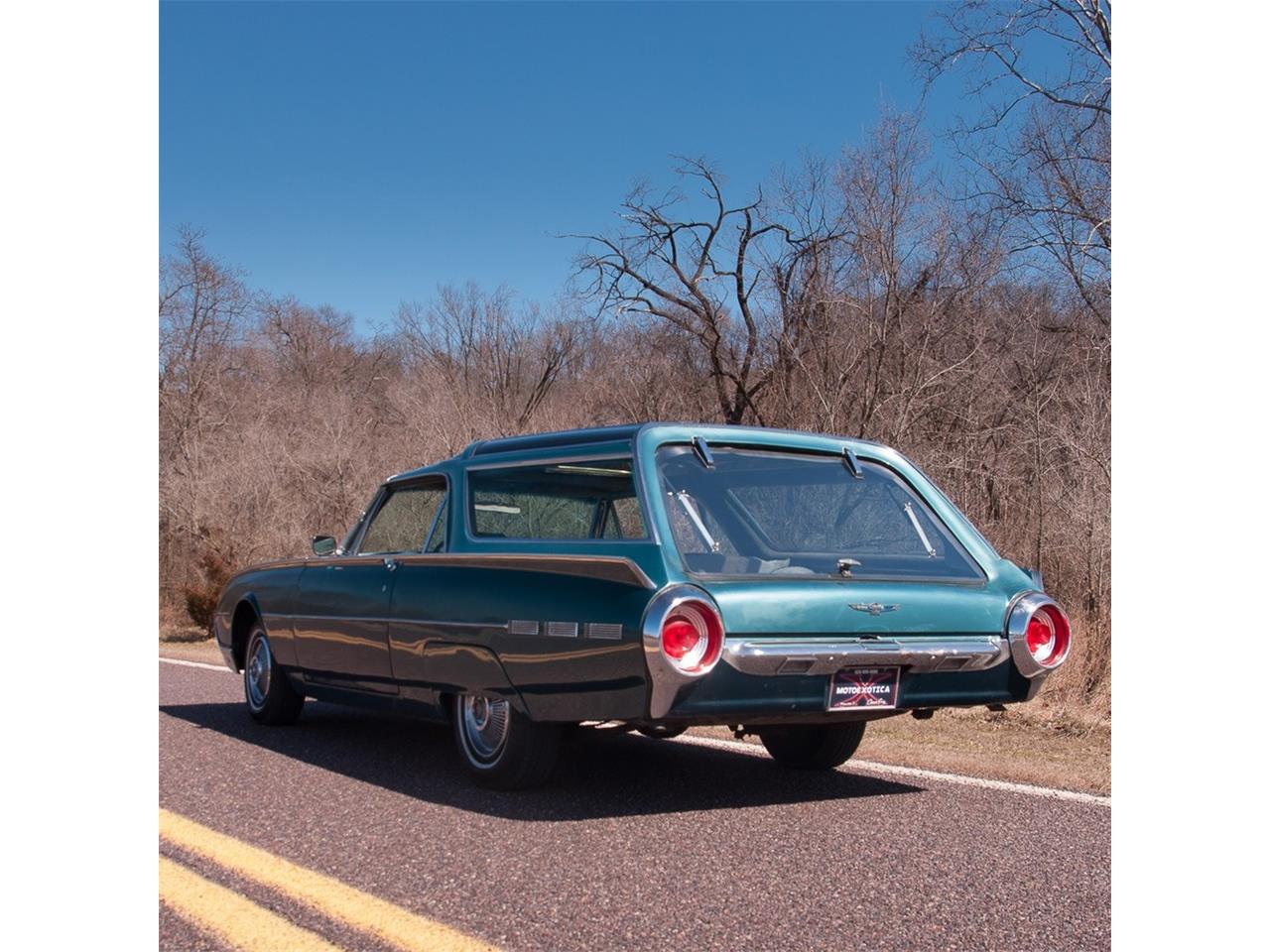 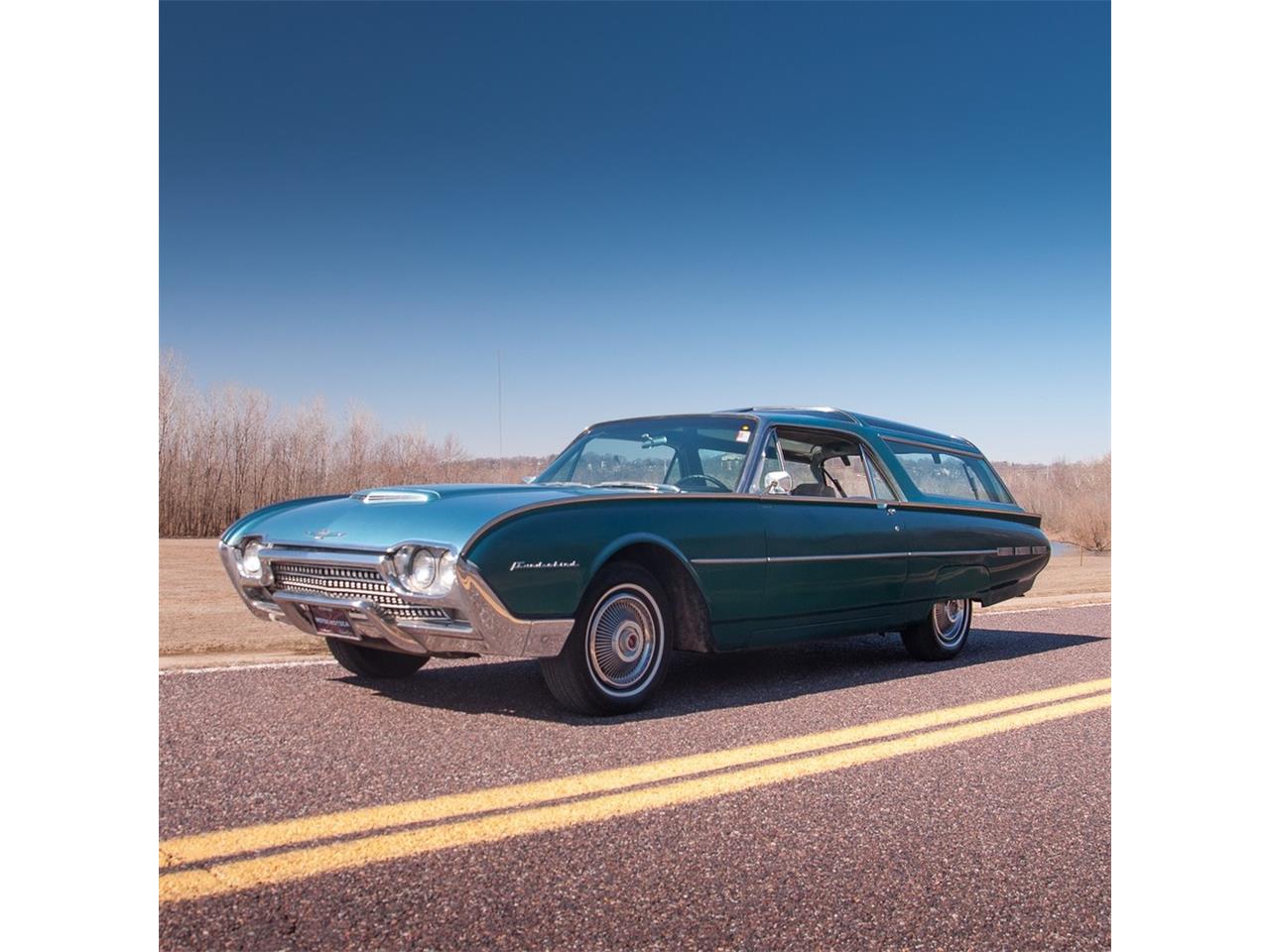 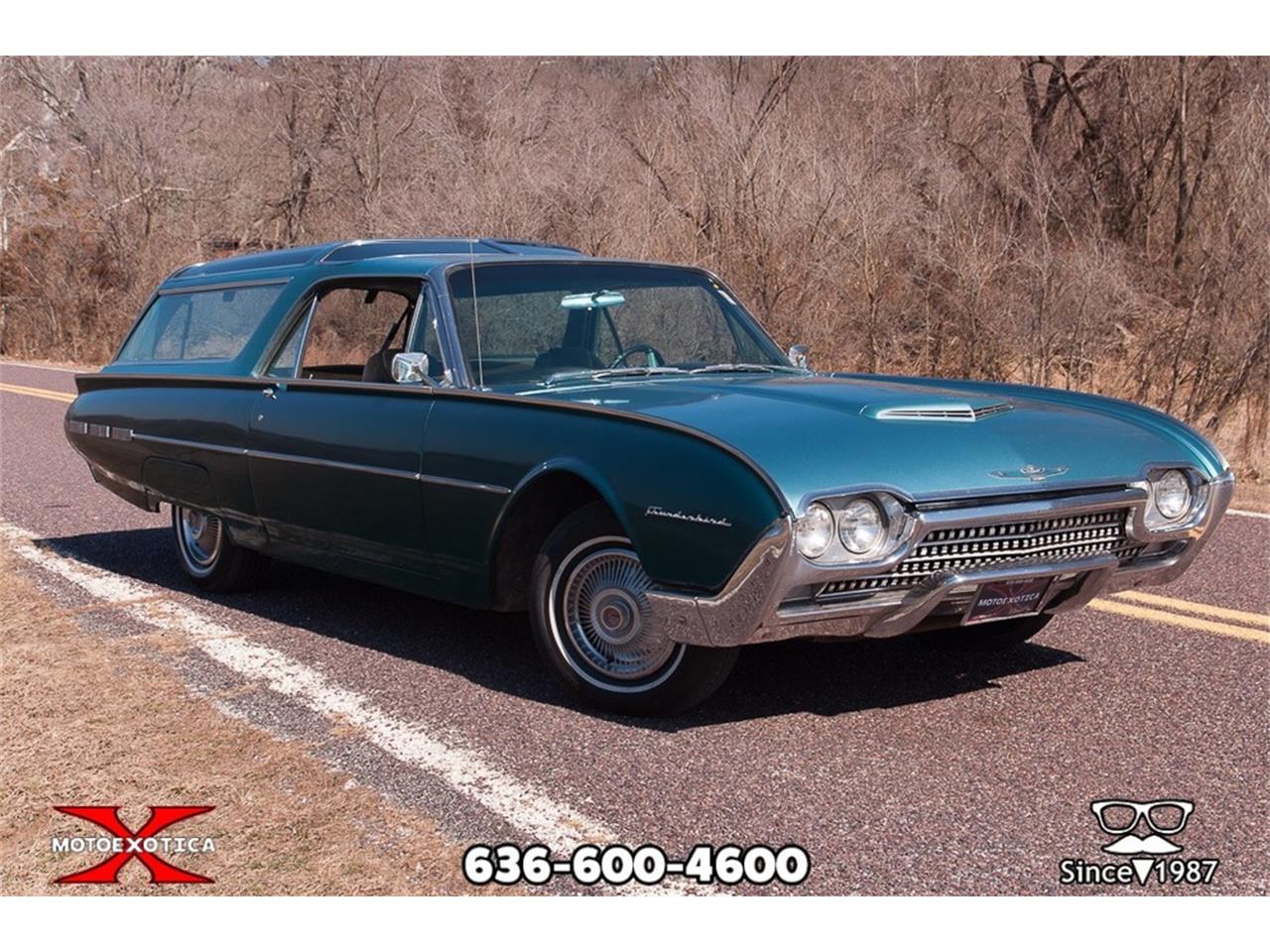 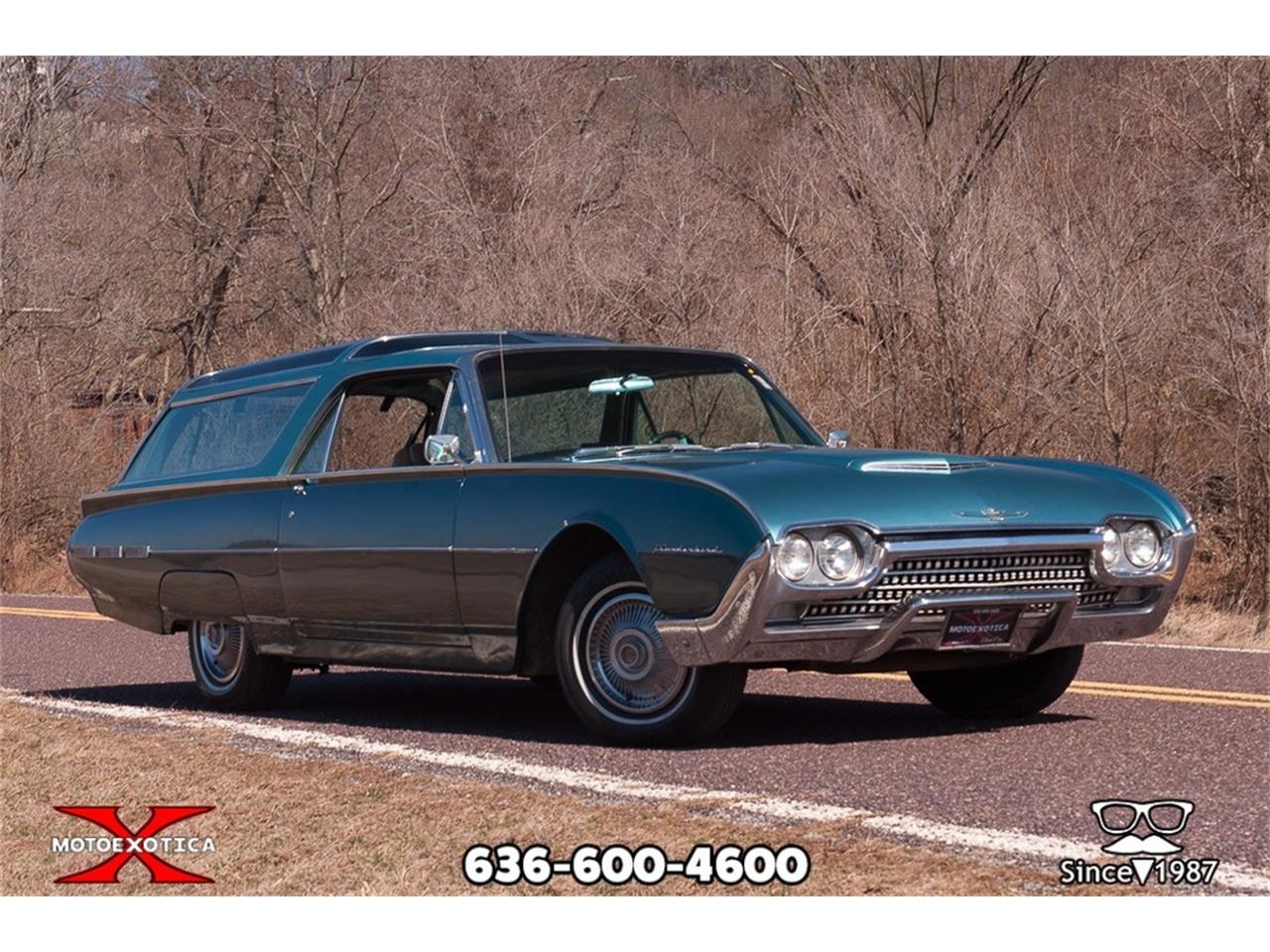 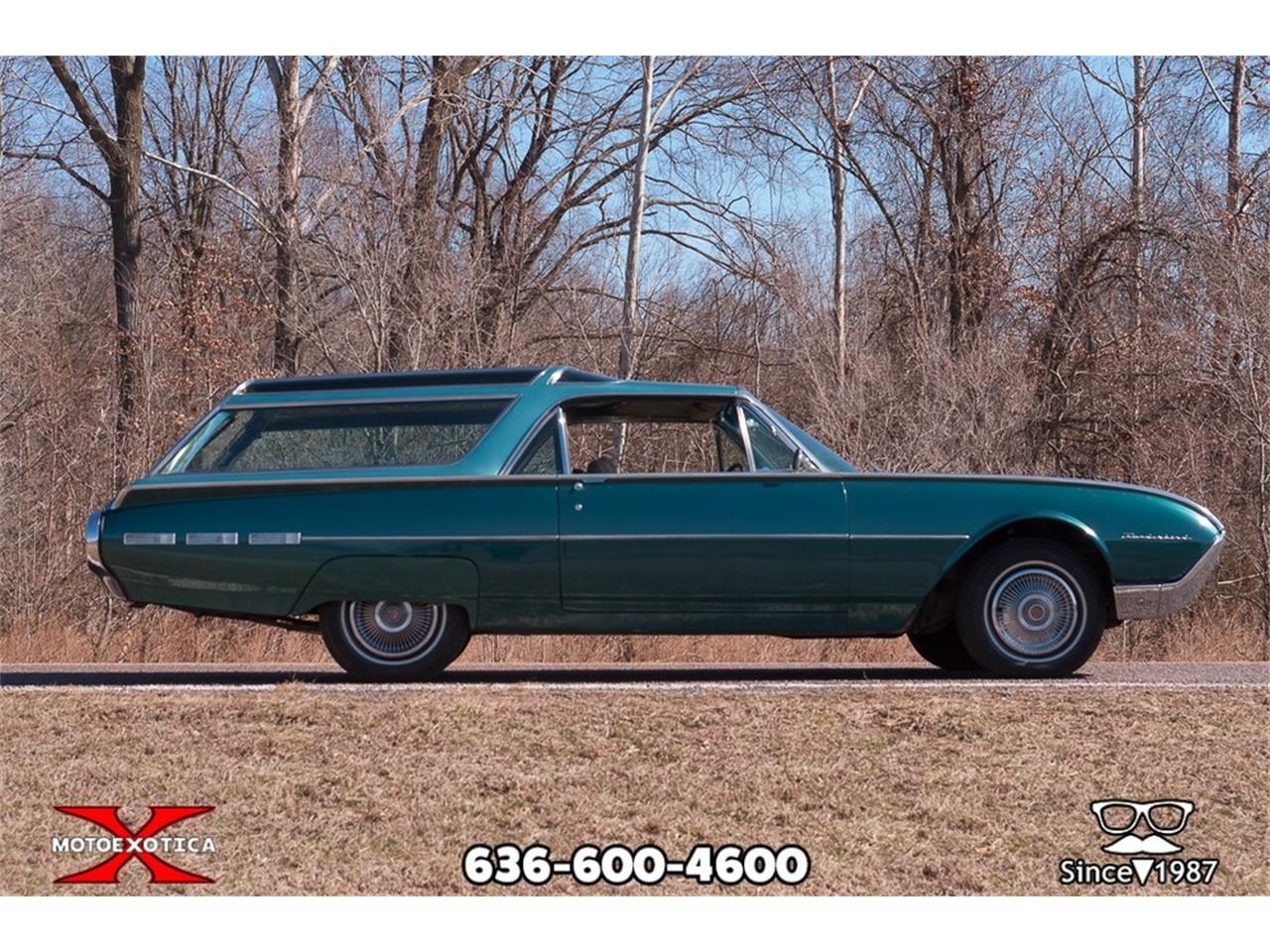 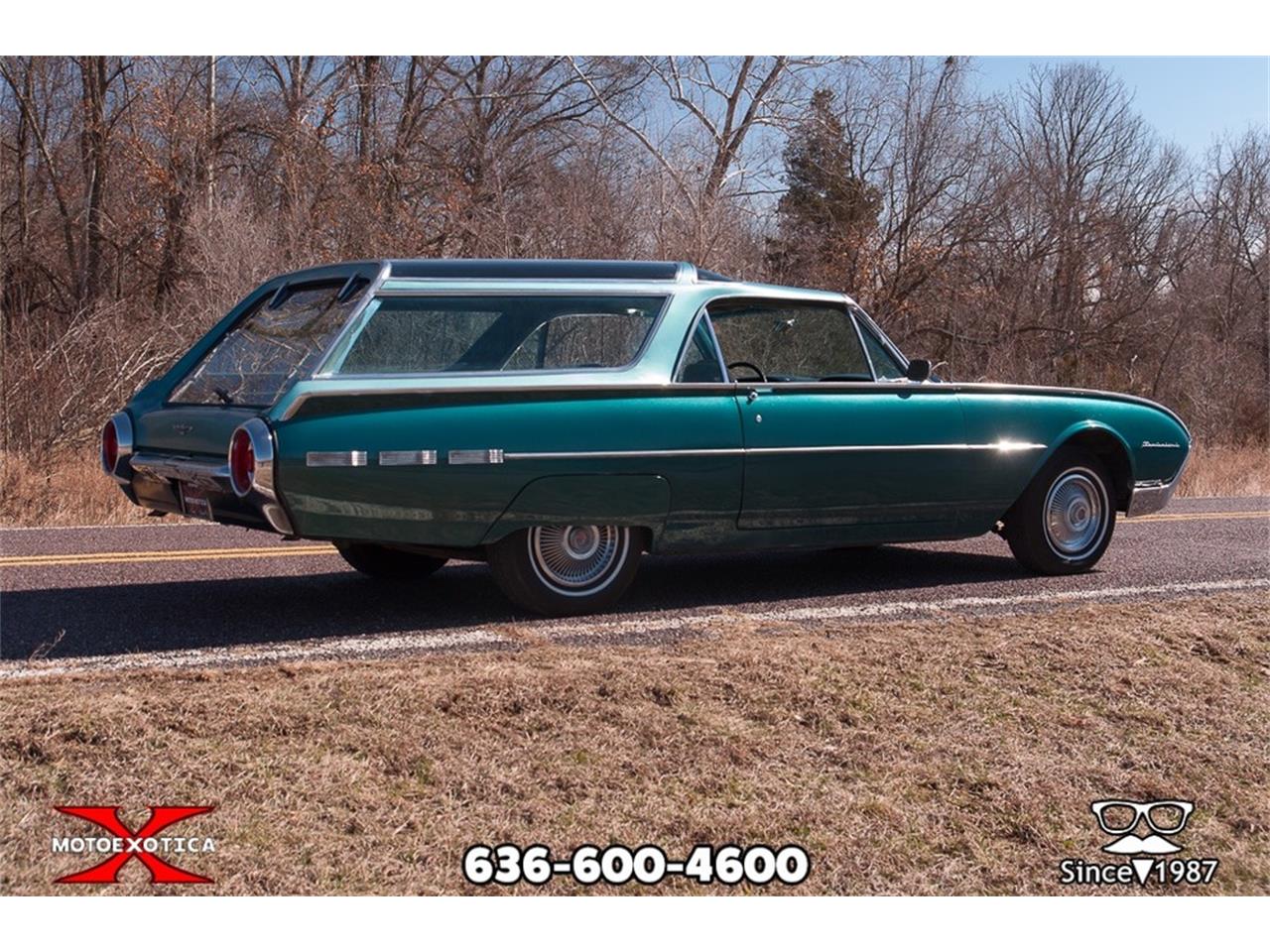 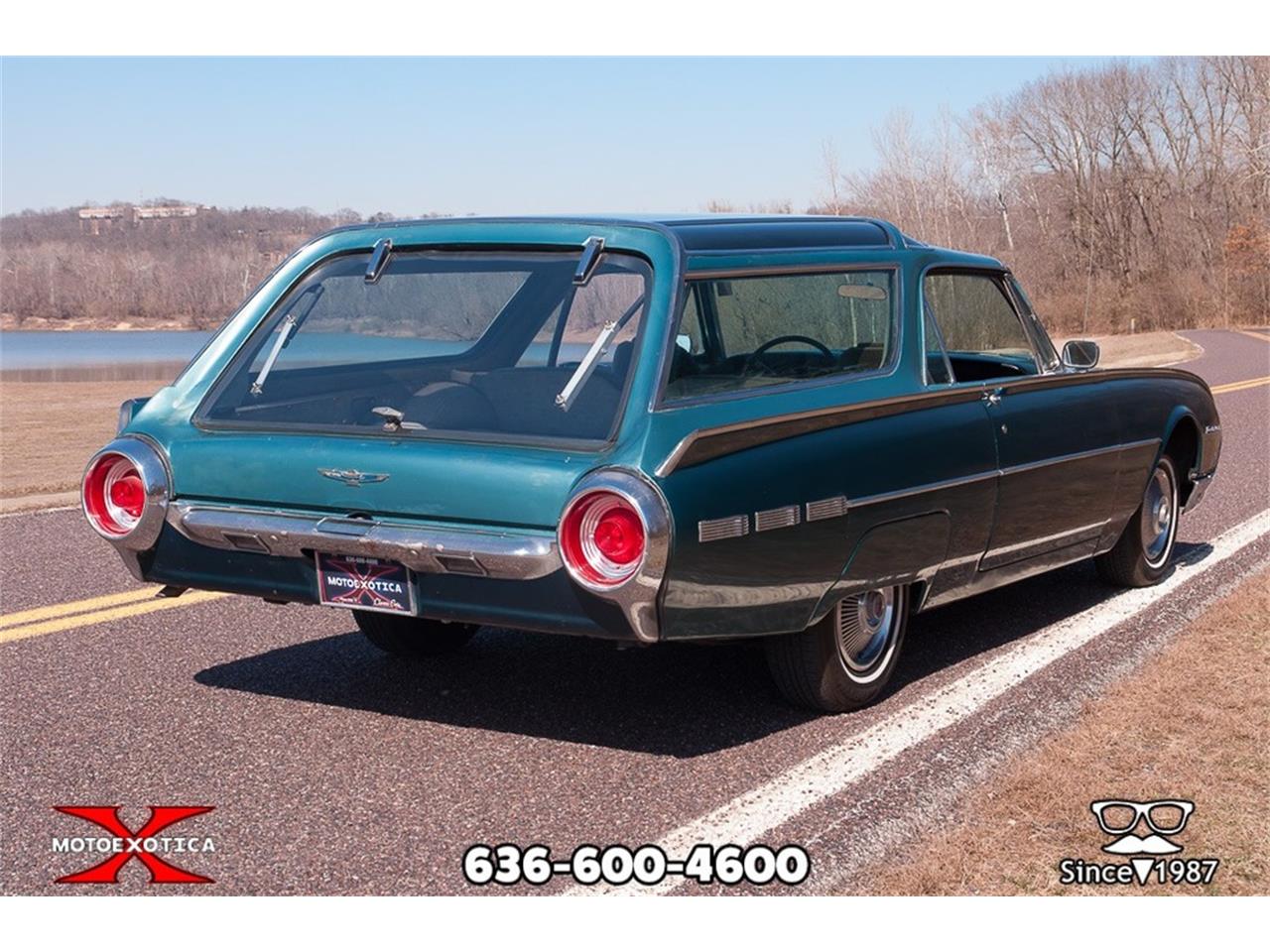 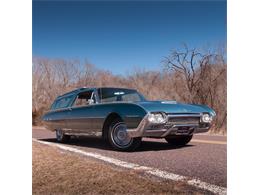 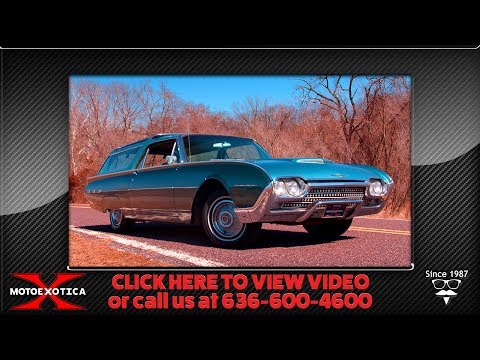 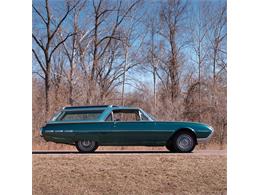 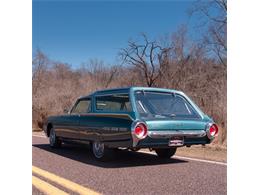 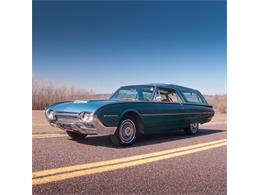 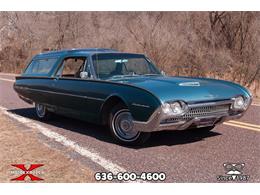 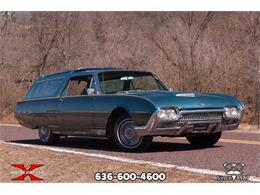 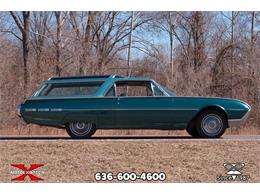 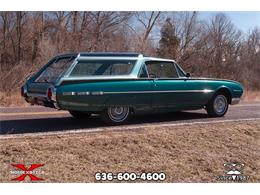 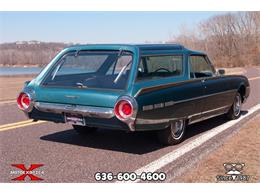 1962 Ford Thunderbird "Vista Bird" Custom Wagon Same San Rafael, California owner for past 25 years, since 1994! Professionally built, one-of-a-kind custom conversion done during the late 1970s or early 1980s with 400+ hours of labor Scenic-Cruiser Roof from a 1965 Oldsmobile Vista Cruiser station wagon has been mated to a 1962 Ford Thunderbird 1969 Ford 390 CID V-8 with crankshaft and high-lift camshaft from a Ford 428 V-8 Rebuilt Holley 650 cfm four-barrel carburetor Cruise-O-Matic three-speed automatic transmission Medium Teal over Jadestone exterior with a gray and black interior Refurbished braking and steering systems; new battery New windshield Documentation dating to 1994 when previous owner purchased cars Featured in Special Interest Autos #162, November/December 1997 Documentation includes conversion and maintenance receipts plus two binders of conversion photos Included with a scaled limited edition model 1 of 400 produced Own this Vehicle from $399 per month-call 636-600-4600 Lyman C. Dye may have answered the question some Ford executives and fans wondered - should this "Vista-Bird" have been Ford's reply to the Chevrolet Nomad or Pontiac Safari? MotoeXotica Classic Cars is pleased to present this highly unique and one of a kind 1962 Ford Thunderbird Custom Wagon. Mr, Dye sold the one of a kind Thunderbird to Mr. Whatley in 1994, 25 year same ownership history! Mr. Dye, of Idaho Falls, Idaho, owned a body shop there that also did customizations. Dye imagined the possibilities of blending the Scenic-Cruiser roof from a 1965 Oldsmobile Vista Cruiser station wagon with a 1962 Ford Thunderbird hardtop coupe, plus various other parts. It is estimated that Dye put more than 400 hours of labor into this project. It took two tries to obtain the roof; a tornado destroyed the first one he ordered from a local junk yard before he could claim it. He found a second donor vehicle and detached the roof himself. Dye briefly had second thoughts about the alterations after he sliced the T-Bird's roof. He slapped the roof on from the donor Olds and was astonished at how well it fit. The B-pillars had to be rolled out slightly to meet the wider roofline of the wagon but the rest was natural. He left the original trunk floorpan in place to serve as a spot for the spare tire well, putting a wooden floor over it to form the wagon's cargo floor. Dye applied carpeting over the cargo floor, matching the rugs in the cabin. The whole rear lower body and bumper were left intact to maintain structural integrity. For the hatch lid, he had a custom tempered glass, added hinges but the struts are inoperable, from a Pinto hatchback at the top, fitted a generic T-handle at the bottom, bookended by two cabinet locks in the lower corners. The exterior is finished in Medium Teal over Jadestone and is in very good overall condition, however, some blemishes are apparently where the wagon's C-pillars meet the metal above the circular taillight and other areas are showing bubbles. Under the hood is a 390 CID V-8 from a 1969 Ford, with a crankshaft and a high-lift camshaft from a 428 CID V-8 engine and breathing via dual exhausts. Backing up this motor is Ford's venerable Cruise-O-Matic three-speed automatic transmission. Driver convenience features include power steering and power brakes. This one-off wagon rolls on Hankook Optimo whitewall radials mounted on steel wheels topped with factory wheel covers. The tires are in very good order while the wheel covers are in good, original shape. The original Thunderbird interior contained ribbed metal portions on the inner door panels, center console and instrument panel, which have been replaced with burled walnut pattern Formica sections. As he customized this 'Bird for his own use, Dye selected seats from a 1978 Plymouth Sapporo, featuring lumbar supports and a tilt-back feature that fit well with the gray and black color scheme. Ford's nifty Swing-Away steering column and wheel were left intact, too. A factory AM radio rounds out the interior. However, the Thunderbird stitching pattern was followed to match the original rear seat, which was mounted on brackets so it could fold flat to extend the cargo area. Unfortunately, the Vista-Bird languished at an upholsterer for more than two years and during that time, the shop employees forgot about the fold-down rear seat, covering it in beautiful job that prevents the seat from folding. No one has had the heart to re-do it, so the back seat remains upright. Total weight gain after the conversion is around 25 pounds, negligible on a vehicle that easily tipped the scales at two tons prior to the change. The wagon won multiple awards during the mid-1990s in California. Documentation includes conversion and maintenance receipts plus two binders of conversion photos, copies of articles published, a scale model of the actual car from a limited run of 400 pieces. This incredible, one-off vehicle would be a worthy addition to anyone's collection. Stop on by MotoeXotica Classic Cars to see the results of what more than a little help from an Oldsmobile station wagon contributed to Ford's four-seat, personal luxury boulevardier. It would have made an interesting addition to Ford's T-Bird hardtop and convertible models. VIN: 2Y83Z1180192 This car is currently located at our facility in St. Louis, Missouri. Current mileage on the odometer shows 24,566 miles. It is sold as is, where is, on a clean and clear, mileage exempt title. GET OUT AND DRIVE!!! Note: Please see full terms and conditions listed below that pertain to the purchase of any said vehicle, thank you. Copy & Paste the Link Below to View Our YouTube Video: https://youtu.be/fe73Khn8rQM 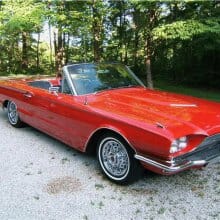 Thelma’s owner is moving overseas, and she’s not going along

“Hi! My name is Thelma…” is how the advertisement for the Pick of the Day begins. The car is a 1966 Ford Thunderbird convertible and the advertisement, placed with ClassicCars.com by the private seller in Palmyra, Indiana, is creative, allowing “Thelma” to tell her own story. Obviously, this red T’bird is named Thelma because of […]

Mystery solved: Pick of the Day ’55 T’bird was special edition

This ’55 Tbird really looks the part of a boulevard cruiser 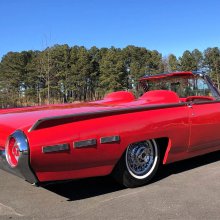 Pick of the Day is the ‘Vista Bird’ station wagon 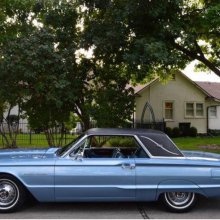 Pick of the Day is a special-edition 1964 Ford Thunderbird 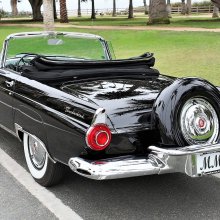 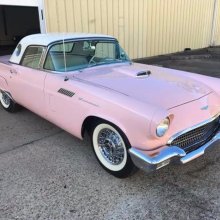 Pick of the Day is a 1957 Ford Thunderbird 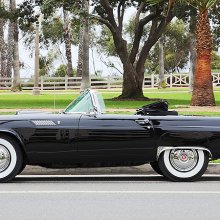 Marilyn Monroe’s Ford Thunderbird to be auctioned for first time

Owned and driven for years by the iconic Hollywood star, the car could be bid multiple times higher than the auction’s estimate 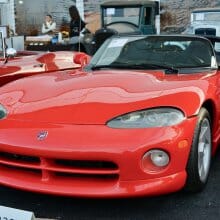 Surprises (good and bad) we saw at Arizona Auction Week 2020

The recently completed Arizona Auction Week 2020 some weaknesses and also some surprising strengths in the collector car market. Prior to auction week, I fully expected American classics, and especially those from the pre-war era, to take a serious dive. No one was more surprised than I was when I saw the Tucker at Gooding […] 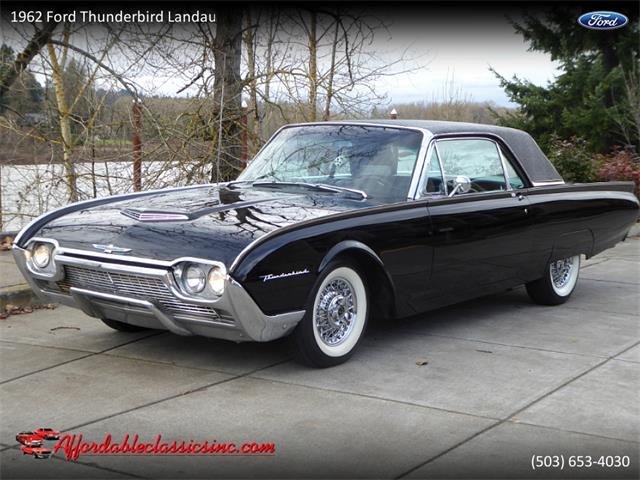 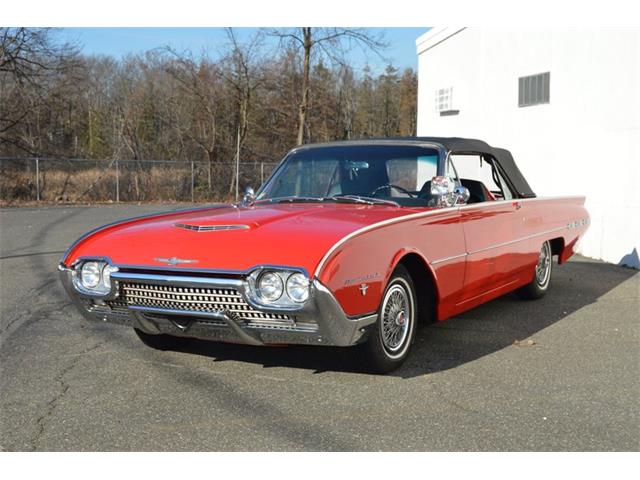 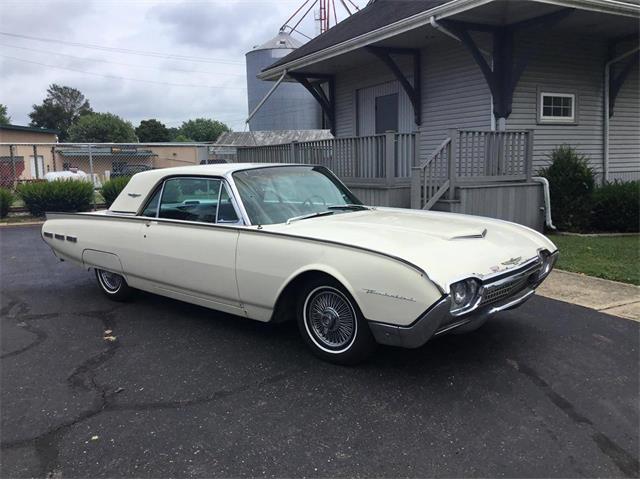