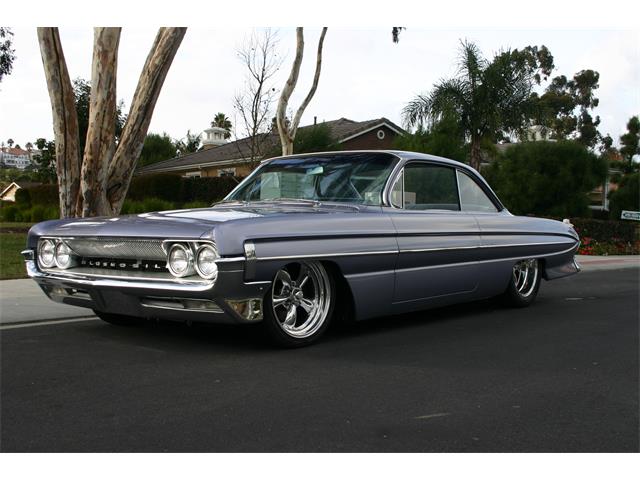 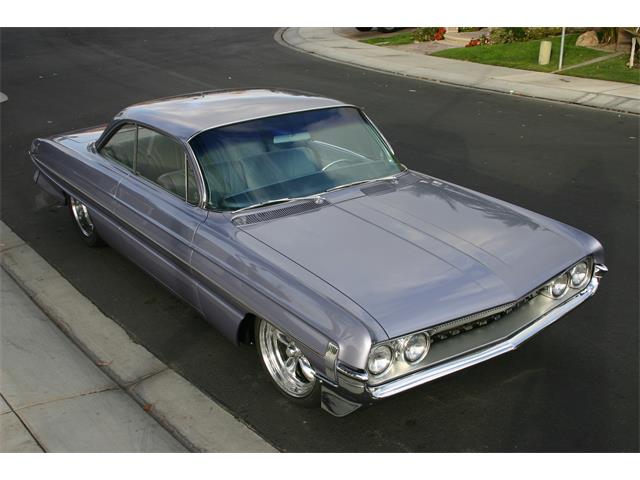 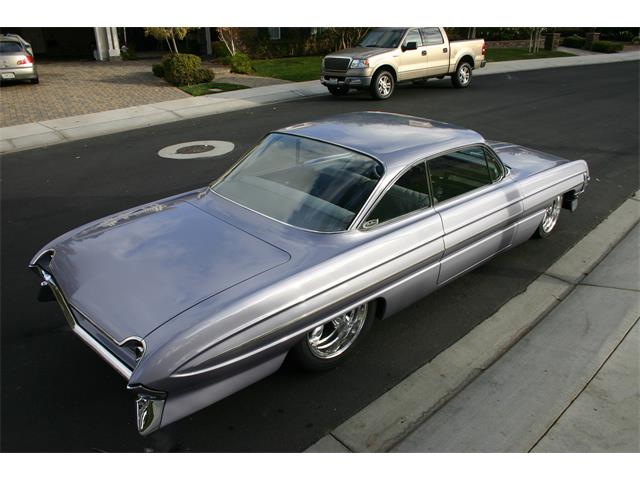 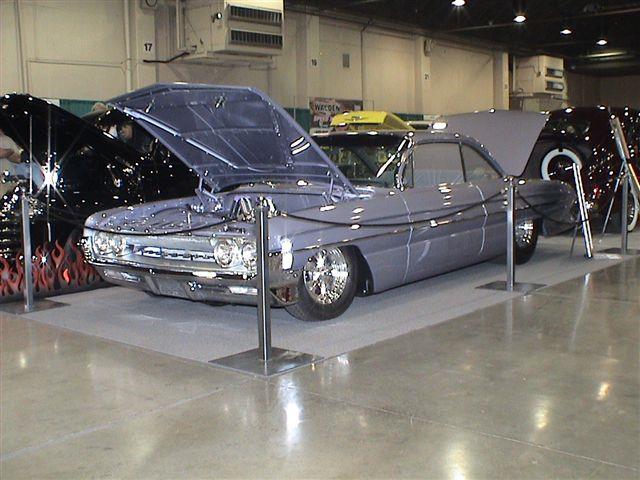 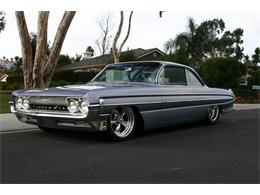 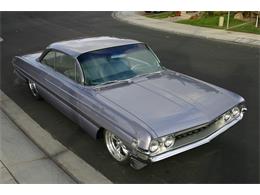 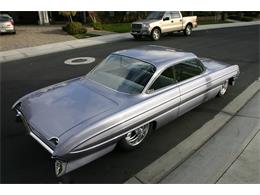 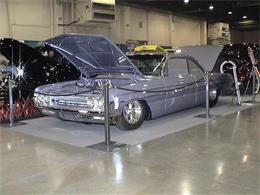 We first saw this incredible Olds over a year ago, and it almost ran as a feature then. After talking extensively with owner/builder Rick Cox of Lansing, Michigan, he told us about the future plans up his sleeve, and we decided to wait out the winter and see the results.

We encountered the car once again at the PHR/Goodguys Street Machine of the Year competition in Columbus, Ohio, and were duly impressed by the results. We were not alone, as the car garnered enough votes from all the judges to become a Finalist for this prestigious award. While the car did not win the annual title, it certainly earned itself the space on our pages we'd been waiting for.

The PHR staff is as guilty as any for developing and using specific terms to define the various styles cars are built in, and very rarely can a builder cross lines, mix styles, and still end up with a truly killer car. Cox has taken elements from the custom crowd, infused them with the proven appeal of Pro Street-style steamroller rear tires, and stirred in a dose of technostalgia to complete the recipe for this outstanding '61 Olds Dynamic 88. The combination of these elements under a non-traditional car like the Olds just plain works, and keeping the powerplant based on the original 394-cube V-8 tickles the purist in us.

The 394-inch V-8 was the largest and last variant of the groundbreaking 303-inch "Kettering" V-8 introduced in 1949. The re-named "Rocket" family of engines boasted such technological innovations as overhead valves, hydraulic lifters, oversquare bore-stroke ratio, forged crank with counterweights, aluminum pistons, full-floating wrist pins, and a dual-plane intake manifold, and proved to be the engine of choice for rodders and racers of the era. The early NASCAR records tell the tale, as Olds OHV V-8s won 8 of the 10 NASCAR races run in 1950. The rich performance history of the engine adds to the overall flavor of the car, as precious few speed parts have survived from the time.

Fortunately, Rick was able to locate and acquire a rare Hilborn stack fuel injection manifold to top his 394, and to add yet another twist to the car's definition, it's been plumbed for modern (read: reliable and drivable) electronic fuel injection. Fuel Injection Engineering performed the upgrade, which is the modern name Hilborn is going by these days. The result is a truly nostalgic engine with plenty of flavor and enough performance to pull the Dynamic 88 down the freeway with ease. Rick claims 425 horses at 4,400 rpm, thanks to a healthy ignition system (consisting of a Mallory Unilite electronic ignition conversion on the stock distributor, an MSD 6A amplifier, a Mallory coil, and Pertronix plug wires) an Olds "Starfire" grind camshaft, and some basic cylinder head porting work from Rod's Machine Shop in Lansing. A big Be-Cool radiator keeps temps below 210 in the Michigan summer heat.

When Rick first bought the car (as a clean, original $8,000 find), the rear framerails were narrowed in the Pro Street tradition to fit a wide pair of Mickeys. A Ford 9-inch rear with 3.50:1 gearing was mounted between the new 2-inch by 3-inch rails, and a triangular four-link keeps it located. To nail the low stance, Rick supports the chassis with Air Ride Technologies Shockwave airbag/shock absorber units at all four corners.

Now sporting Colorado Custom wheels (20x10 in the rear, and 18x7 up front), the Olds has the proper attitude and altitude to grab your attention and keep it. The flashy details of the '61 have been retained and restored, like the freaky bumper designs and a single slice of bodyside trim. The doorhandles and scripts have been shaved, and the resulting smoothness works wonders with the bubbletop roofline and ultra-low stance to keep you wondering what's been done.

Choosing a color wasn't hard, as Rick chose a modern remix of the car's original tone. The violet color (officially named "Twi-Lite Mist") seems unique, and today it is, but it was one of many interesting shades offered by manufacturers back when these cars were new. It's a good tip for builders looking to make a statement, and we'd second Rick's recommendation to take a look at the factory colors from the past to truly strike a stylish chord when choosing paint.

The interior carries a modern flavor, with copious grey tweed covering the original seats. Completed by Fine Line Interiors of Clarkston, MI, the tweed fabric infuses some purple accents to set off the paint. Carefully crafted door panels flow smoothly from front to rear, boasting grey leather and custom door pulls to set off the original dash. Digital gauges (from Nordskog) have been set into the original gauge pods to complete the old/new look. A B&M shifter lives in a custom grey leather console, and controls the Turbo 350 transmission living behind the injected 394. Violet leather is used sparingly throughout the interior to properly bring the grey in tune with the paint.

Rick smiles when he tells people "Daring to be different is still a good thing", and after seeing this well-crafted line-crossing Olds, we'd have to agree. Cox's passion for the purple Dynamic 88 is evident in his choices for everything on the car, and while we're sure it was far from the easiest thing in the world to build, it stands among the finest examples of why we love hot rodding.

Amazing Power and Performance
Buxton Motorsports – one of the top hot rod builders on the West Coast – was engaged to look at improving the power and performance of the Olds 394 rocket. The first step was to upgrade the exhaust to a 2-1/2” ceramic-coated Mandrel bent custom exhaust. Next SpinTech custom mufflers were installed, which added performance and a great sound. Then the air ride suspension was upgraded with the latest version and auto ride leveling. But Buxton wasn’t through yet! After that, Buxton went through the Ford 9” rear end, adding new axles and disc brakes with cross-drilled rotors and electric hydro power boost. Finally, the Hilborn electronic fuel injection was fine-tuned to get the maximum out of the engine package.

Rick Cox built this car to compete for the country’s top show honors, and Nile Wing invested hundreds of hours doing frame off paint to an already straight perfect car. The beautiful timeless lines of arguably the best bubbletop were left uncut from the factory; the only alteration is the shaved door handles and mirrors. The color is factory original, with added DuPont Polly for a dynamite look.

An Olds Bubbletop Fan’s Dream Car
Whether heading to the local coffee shop, going for a weekend car cruise or setting it up in the main hall at the Grand National Roadster show, the Olds is always a pleasure to drive, and it’s always a pleasure to talk with fellow Oldsmobile bubbletop fans.